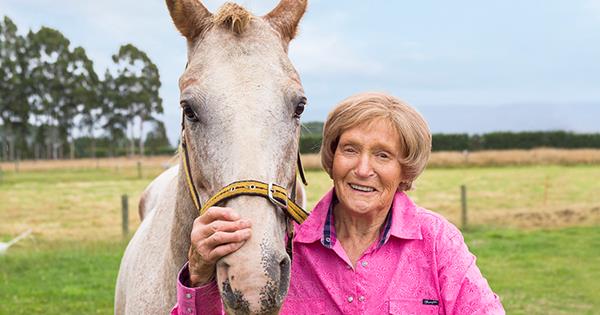 Whether it’s horsetrekking through remote Otago mountain trails, riding her all-terrain motorbike or preparing to grub thistles in the hay paddocks of her Taieri property, it’s rare to find Alice Sinclair sitting still.

The adventure-seeking 86-year-old is well-known around Mosgiel as much for being an Energizer Bunny as a local treasure. But to her five kids, 10 grandchildren and 14 great-grandchildren, she’s simply “bloody hard to keep up with”!

Alice was set to make history last month, trekking with her Standardbred horse Keira on the 30th Otago Goldfields Heritage Trust’s cavalcade, an epic journey following in the footsteps of the region’s goldmining pioneers.

As the oldest participant, she is one of just four people who have ridden every cavalcade since the inaugural event in 1991. It is made up of nine different trails, some covering as much as 50km a day and crossing country that usually only musterers would see. Unfortunately, Covid has forced the event to be postponed until next February.

“Let’s hope I’m still there then!” she laughs, adding that she loves the backcountry scenery, the sense of achievement, the people and the food.

Did she ever imagine in 1991 she’d still be doing it more than 30 years later?

“Oh, good heavens, no! Although I was hooked after the first one, when we took our own bedding and food and everything. But after that, there were people who cooked for us. It was terrific. And it became a holiday away from the telephone ringing and the business to run. It’s marvellous being up in the hills with people that become like family,” explains Alice.

“We had tents and took our own stretcher and sleeping bag, or you slept in the woolshed or hay barn out in the sheep yards. I’m privileged now I’m a bit older as my daughter Janette drives the Mitsubishi 4WD and horse float each day from camp to camp, and we sleep in a double bed in the back of the 4WD.”

When her husband Len died in 2015 after a tragic accident on their property, Alice thought she’d have to stop doing the cavalcade without him to accompany her.

“Then the family got together and said, ‘No, you’re not giving up, Mum,'” she recalls. “And our [Perth-based] daughter Janette said she would come over from Aussie to be my back-up, which she’s done every year. She wears her late father’s cavalcade hat, adorned with the badges he gained each year for taking part. People still recognise it as Len’s, so that’s lovely.”

The couple were married for almost 60 years.

“One day I came out of the workshop and saw him lying on the gravel,” shares Alice. “Two of the grazing horses had gone down the driveway and a little Shetland horse frightened them. They bolted back up the driveway, knocking Len down on the road. He was taken to hospital but sadly never recovered.”

Since being widowed, Alice has leased half of their 15-hectare farm to another farmer and son Stephen has taken over their chainsaw business. But age has not succeeded in slowing her down. When the Weekly catches up with the sprightly octogenarian, she has just been out collecting the harvested hay – 84 bales from two paddocks.

“So, we got that in and there’s a hay paddock down there full of blimmin’ Scotch thistle. I didn’t want it in the hay, so I had to get to work and grub them all out. I ended up taking three trailer loads down to the rubbish. But at least the hay is clean now.”

Ask her if she ever gets tired and she chuckles. “Yes, now and again. I daren’t stop moving. If I sit down in a chair, it’s a wee while before I can get back up! I have a farm to run, so there isn’t time to sit around, there’s always something to do.

“All day yesterday I was out weed spraying. I can’t see myself retiring. I’m happy here and I’ve got a jolly nice house, which Len and I built in 2006.”

Alice has always worn a lot of community hats. She spent 20 years as a volunteer ambulance officer, taught cake decorating at Taieri High School and served in the Good Samaritans.

Surprisingly, it wasn’t until her forties that her love of horses began. With four children and fostering a fifth, money was tight.

“We couldn’t afford to buy horses,” she tells. “It wasn’t until after the children left home that my husband gave me $200, and I went out and bought myself a horse.”

To be able to buy her first saddle and bridle, she had to be resourceful.

“A lady down the road had a truck and I had the chainsaws, so she and I used to go out together to cut firewood from nearby willow trees and sell it,” says Alice, who grew up as an only child in Gore.

“A year later, I wanted to go hunting but the horse I had was absolutely terrified of wire, and there’s no way I could have taken her. So, with my wee bit of extra money, I went out and bought another horse.”

Alice joined the Otago Pleasure Horsemen club and along with the annual cavalcades, also added hiking and cycling trails to her busy life.

“Every time I said to Len that I’d love to do the Milford Track and suggested we do it together, all I ever used to hear back was, ‘No, we can’t do that because we can’t leave the business.’

“Then one time Janette was over visiting, and he suggested driving us both there and picking us up at the end of the track. So that was the start of my hiking adventures.”

For her 80th birthday, Alice walked the 75km Camino Salvado trail in Western Australia. The following month she and Janette, 63, spent five days hiking in the Abel Tasman National Park, followed by a five-day cycle trail.

“She’s a freak… phenomenal. I just hope the genes run in the family,” her proud daughter says of her mother’s inspiring achievements.

Adventure-seeking was somewhat of a family trait – her trailblazing grandmother Alice Mitchell cycled from Gore to the North Island in 1895 and Janette is an adventure trek leader who takes groups to the likes of Everest Base Camp in Nepal.

“I don’t ever want to stop having adventures,” smiles Alice. “I went skydiving at 65, took a glider flight for my 83rd birthday and went bungy-jumping last year. You have just to keep going and trying new things.”

Quickfire
Do you have any time for hobbies?
Yes, I paint and have sold some of my work. I go to an art group every Friday morning, but I call it my farm break!

Have you ever had any horse trouble on the Otago Cavalcade?
I had a horse called Lady Godiver in 2008 on the Cavalcade, and while out grazing we think she tried to jump a ditch and fell and broke her leg. Sadly, she had to be put down. I then went out and bought Missy. But three years ago, I had problems with her. I couldn’t get her to walk, she just jig-jogged the whole seven days. She was getting sick of the cavalcades, and she bucked, reared and went backwards. Of course, the men were yelling at me to get off her before she killed me. You can imagine what I said… “What do you think I’m doing?” I had to make Missy stand still so I could get off her. And they said to me, “Will you finish up with the Cavalcades now?” I replied, “No way! I’m going out to buy myself another horse.” So, I bought Keira. She’s got a bit of life in her and is just terrific.

Name one thing you couldn’t live without?
My six-wheeler Polaris motorbike. It’s got a tray on the back and I’m on it every day. I love my ride-on mower too – it helps me get the lawns done in about two and a half hours.