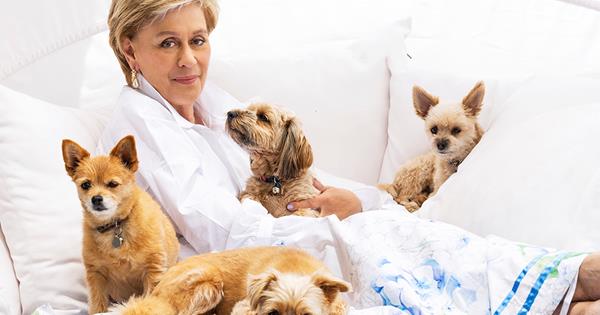 To be invited into the home of one of this country’s most iconic figures is a privilege, but also an experience to be enjoyed because Dame Kiri Te Kanawa is a woman who leaves any airs and graces at
the front door. At home she is a friend, a lovely chatty woman with a great sense of humour and many stories to tell.

“That’s the front door,” she says as she welcomes the Weekly team into her home. “But we never use it – come this way.”

Dame Kiri’s house is filled with light and big windows that reveal spectacular views of the Bay of Islands, but it is also a house that is a home.

There are comfy, soft couches, magazines and books, art and flowers, and it is impossible to not feel welcome.

On the dining table are sandwiches, cake and cherries for her guests, and as Dame Kiri sinks into her couch she is a picture of contentment.

It takes a while to realise that I am somewhat awed that there are chicken sandwiches with the crusts cut off (courtesy of Dame Kiri’s special friend Diana Fenwick, who flew up north especially to make them).

Fresh-faced and her hair brushed but not blow-waved as she awaits the Weekly hairdresser and make-up artist, Dame Kiri is a natural beauty. Dressed simply in white slacks and a striped shirt, she is relaxed and chatty.

Outside her window is a tree of equal beauty, a rambling pōhutukawa which she says is at least 500 years old, and all around is the constant trill of tūī enjoying the many native trees on the property.

“I’m so pleased we are in the right place – we are home,” she says.

Dame Kiri has owned the property in the Bay of Islands for 38 years, but until now has not lived here permanently. The house is simple yet splendid, down-toearth yet elegant, much like its owner.

When Dame Kiri last talked to the Weekly, she had recently made the decision to move home from the UK to spend more time with her gorgeous three-and-a-half-year-old grandson Luther.

She was seeing him once a week and she said, “I’m 77 now and I don’t know how many summers I have left. I want those summers to be with Luther.”

But then the Covid variant Delta struck and Auckland, where Luther lives with his parents, Kiri’s son Tom Park and his partner Zeera, was put into its longest lockdown yet.

“We got stuck up here, but I’m not complaining,” she says. “I’ve never worked harder in the garden. I’m really into my raised beds, and I’ve got lettuce, tomatoes, cucumbers, courgettes and out the front I have seven-foot sunflowers coming up.”

With her partner, who prefers to stay out of the spotlight, she says they are working through the 10-acre [4ha] property and there’s plenty of toil ahead. “We’re both quite perfectionist types, so there’s always more to do.”

As you head up the long drive to Dame Kiri’s house there are possum traps everywhere and a new pest-free fence has been put in. There are countless wood stacks created from dead trees on the property, and everywhere you look you can see that there has been careful thought and work put into it.

The recent arrival of their ride-on mower from the UK was cause for celebration as Dame Kiri loved hearing it outside cutting lawns halfway around the world in her new home. And she has recently had solar power installed, which means she is learning to live by the sun.

“If I look at the control box and there’s plenty of power, I rush off and do a load of washing,” she laughs.

And finally, little Luther is with her for the holidays.

This was his third Christmas with Dame Kiri, but most likely the first he’ll remember when he is an adult.

He’s very keen on his Spider-Man and Iron Man action figures – and it’s obvious Dame Kiri has spent a lot of time playing with them too. She has the superhero noises down pat and as they play together, Luther looks perfectly content in his doting grandma’s arms.

Her intention of seeing more of Luther by moving home may have been dashed by Covid restrictions, but she did get to see him briefly on an exempt medical trip to Auckland. It was an opportunity to catch up with her wee boy, albeit briefly and socially distanced with a mask on.

Dame Kiri remains grateful to be living in New Zealand while her friends back in the UK struggle with the Omicron variant. And she remains frustrated with those people in this country who complain that they have lost their freedom through our Covid restrictions.

“I think that this country is not used to following a line, whereas in the UK they went through the war and they are still in that mode of ‘we will do what we are told’, and Germany is the same. They have been in the situation where you have got to do these things to save lives, but here in New Zealand I feel maybe they haven’t had that, except some of the older folk.”

Because of Covid restrictions, Dame Kiri has been required to style herself for the Weekly shoot and she shows me the clothes she has chosen to wear from her wardrobe. She holds up a gorgeous blue-and-white floral skirt and says proudly, “This is a Zara bedsheet.”

She wanted a skirt with hydrangeas on it and when she found the perfect fabric, it just happened to be a £19.99 sheet, which she bought and then asked her dressmaker to make something from.

One of her favourite pieces of clothing, she wore it to the Cardiff Singer of the World Awards in 2019. She puts it on and does a twirl, then says with excitement, “Shall I wear the pearl earrings I wore to Charles and Diana’s wedding?”

There is a sense that now Dame Kiri has all her treasures with her in her home, she is enjoying discovering them again.

Being stuck in the north has not prevented her from continuing work with the Kiri Te Kanawa Foundation, which she began in 2004 to help young New Zealand opera singers when they start out on their careers.

Dame Kiri mentors the young singers and the foundation works to support them and for a year, the 18 singers she looked after were supported with £800 month.

“It was a lot of money for them coming from nowhere, so it was great to be able to help them and now they are starting to work again,” she says proudly.

In August, she held a workshop and she loved the voices she heard.

“Some of them are a little bit young, but they will all go off and improve because they are focused. Someone said to me, ‘How do you know they are going to be okay?’ and I said, ‘Because there isn’t anything else that they are distracted by. We make that happen so that they can become the great singers they are destined to be.'”

Kiri admits she had done little to prepare for Christmas. Like many of us, she struggled to get into the spirit after the difficult year we all had. “I turned on two sparkly Christmas lamps and that was Christmas,” she laughs. “It’s a strange feeling. It’s not cold enough, it’s not wet enough and it’s not miserable enough.

“In England, we hunkered down and it was cosy, and we had too much to drink and eat, but here it’s all salad and tomatoes!”

But there are no regrets about returning to her home. She had a very special connection with the former owner of her house.

“She was a wonderful and special lady who adored me,” she says. “Before I left for England as a younger opera singer, she sent me a tiny New Zealand flag made of silk and a compass. I travelled all through Europe using that compass and I still have it.”

And when Dame Kiri relaxes on her outdoor day bed for a photo, she chooses a simple white tea cup that belonged to the former owner of her home. “This gives me very special memories,” she says as she gets comfortable.

Dame Kiri says her home has a very special feeling to it, which means quite often people find it hard to leave.

“It’s a strange thing that happens, but once people have been here for a while, in general they resist leaving. It’s happened several times where people have sensed such a connection that they feel it is very hard to disconnect. There’s almost a possessiveness of it. It’s the love – they would dig themselves in if they could.”

She has always felt this about her home and knew that eventually she would return to it for good, but perhaps not quite as quickly as she did.

“I knew I would always come here, but the decision was so sudden because of Covid. I remember the last time we flew back to England from here, I said to my partner, ‘We are going the wrong way. This is the wrong way.'”

She says that if she had to move now, it would be much more difficult trying to sell her house in the UK and get movers, containers and her four adorable dogs organised.

“It was the right thing to do. The time was right for us, but it has been a year and a half of stress getting here and we’re still not quite through it with a few loose ends to clear up, but we’re getting there.”

As the Weekly team leaves, Dame Kiri waves us off surrounded by her four gorgeous Pomeranian-Yorkshire terrier crosses and her grandson by her side.

I hear her lean down and tell Luther that they’re having whitebait fritters for dinner. He hands her Iron Man, ready to play again.