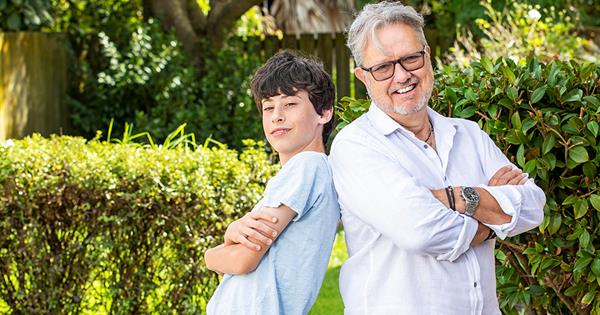 Devoted mother Bronwen Tollan and her 12-year-old son Andre have been through a lot together – including a congenital heart condition, and a diagnosis of both ADHD and autism.

It’s been relentless at times, but Bronwen knows it’s all worth it for her much longed-for child, who took seven years to conceive and was born three weeks early with a blocked pulmonary artery.

“He’s had a lot of trials for someone his age, but he’s my everything,” says the South Auckland mum, 54, who always knew there was something special about Andre. “He went through a phase where he was obsessed with signs. He could read from three years old, so I would have signs everywhere in the lounge, and he would go round and read them over and over,” she recalls.

Due to his heart condition, Andre had endured four open-heart surgeries by the age of eight and when he was seven, he was officially diagnosed with attention deficit hyperactivity disorder (ADHD), a condition that can cause unusual levels of hyperactivity and impulsive behaviours.

Following that was the diagnosis of autism spectrum disorder (ASD), which can cause significant social, communication and behavioural challenges.

Tragically, around the same time his father suffered a catastrophic brain injury, leaving him unable to help care for Andre.

Despite their many adversities Bronwen, who later separated from Andre’s dad, kept going for her son.

“I’m very self-sufficient and can cope with anything that’s thrown at me,” she explains. “Andre gets that from me too.

“I want him to be the best adult he can be when he grows up, so I can be quite hard on him. But he’s so loving, and he always tries to do his best, and I think that’s beautiful.”

Now, after many years doing it alone, the committed single mother is getting a much deserved break thanks to Big Buddy, an organisation which matches men with boys who don’t have fathers in their lives, to provide guidance and friendship.

“They say it takes a village and we don’t have that – we don’t even have a small tent,” says Bronwen, who works as a learning assistant and English-as-a-second-language teacher. “I wanted Andre to have a male figure in his life he can hang out with.”

She was hopeful but also nervous about introducing someone new to Andre, who rarely connects with strangers and normally runs away to hide when new people visit.

Advertising creative director Pat was paired with Andre in 2020, but says he initially didn’t realise what a positive impact he was making.

“It’s nice to get out and feel I’m mentoring someone,” says the father-of-three. “Bronwen said he really loves spending time with me and it’s great to hear that feedback.”

Pat signed up for Big Buddy because he missed being so involved with his own children, who are now adults.

“You just need to wander through Noel Leeming and Andre’s eyes light up. He’ll tell you about every computer imaginable,” says Pat, who underwent extensive testing and police checks as part of the process of signing up for the charity.

For Andre, the positives of having a Big Buddy are simple. “Pat’s pretty cool,” he says. “He’s my friend.”

It’s a huge relief for Bronwen to have found someone so willing to relate to her child.

“There’s not enough understanding about ADHD. Other people look at him and think I have a naughty child. His brain is working so quickly, and the world is moving so fast for him all the time, and that’s really hard for him to handle. I was worried someone wouldn’t be able to keep up, but Pat takes it all in his stride.”

It’s also a rare moment each week that Bronwen gets to relax.

“The little things are important like even being able to do the grocery shop alone at a leisurely pace. I went through a time where I couldn’t afford a babysitter, so I didn’t have any time to myself ever, which iswhy I’m so grateful now,” she says.

“I thank the universe that Pat was sent to us.”

New Big Buddy ambassadors Jason Gunn and Roman Travers will team up for the first time hosting The Big Quiz, an online fundraiser via Vidzing on May 12, with celebrity appearances and prizes to be won. All proceeds will go to making a difference in the lives of young boys. You can make a donation to join here.
Can you help big Buddy? Since Big Buddy launched in 1997, the charity has matched more than 1000 Big and Little Buddies, but now has a long waiting list of boys waiting for an adult volunteer. For more info on becoming or finding a Big Buddy, or to donate, visit bigbuddy.org.nz, email info@bigbuddy.org.nz or phone (09) 828 1358.