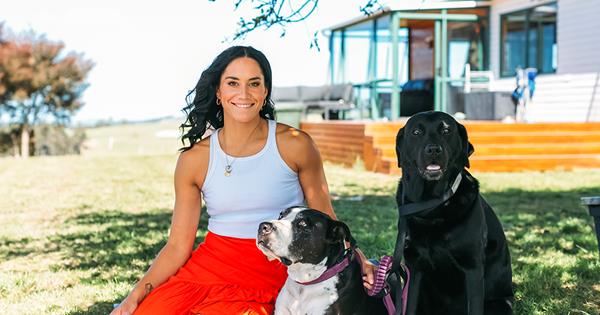 Tackling the opposition on the field was easier than making a hard family decision, tells the rugby star

Shiray Kaka has sacrificed a lot to be a member of the gold medal-winning Black Ferns Sevens team.

She has spent six years living apart from her husband Gillies, 31, a former All Blacks Sevens star who now plays rugby league in Japan – meaning he’s overseas nine months of the year.

Shiray has also put off her dreams of growing her family, but this is something the 26-year-old is prepared to do in her pursuit of becoming one of New Zealand’s rugby legends.

“I haven’t reached my full potential as a rugby player yet,” she asserts. “I’ve always been the player who only just makes the team or is always on the bench. I’ve never been the star player and I want to see if I can reach the promise of what I know I can be.”

In the four years they’ve been married, most has been long-distance and Shiray had planned to retire once she finally secured her gold medal at the 2021 Tokyo Olympics to spend some quality time with Gillies. But she couldn’t ignore the pull the sport still had on her.

“I said to him if I won gold then we’d have kids and that would be me done,” recalls Shiray. “He was so excited to have me in Japan. So for me to then say that I didn’t think I was done with rugby was
a big conversation.

“I still have days where I think, ‘What am I doing? I could be pregnant, and raising kids here and sending them to school on the rural bus.’ It’s hard because I have to choose between my job and having a child because I can’t play while I’m pregnant.”

Since she started training with the Black Ferns at age 17, Shiray’s rugby journey has been plagued by injury and crushing disappointment.

She struggled having to sit on the sidelines as a travelling reserve and watch her team pick up silver at the 2016 Rio Olympics.

Then, in 2018, as she recovered from her third surgery in as many years, this time for a torn ACL (tissue that connects the thighbone to the shinbone), Shiray was informed her Black Ferns contract wouldn’t be renewed. The Hamilton-raised beauty, who now lives on a lifestyle block in Katikati, reached an all-time low.

“I spiralled and just wanted to give up on rugby. I was very close to depression. I had nothing – no job, my husband was in Japan and I had no idea who I wanted to be as a person. So, I sat down and I was like, ‘What do I value? What are my hopes and dreams? What’s holding me back?’ Whether rugby was a part of that or not I didn’t care, it was just about trying to be a person that I could look at in the mirror and be proud of.”

Reaching rock-bottom lit a fire in her belly and Shiray decided she would do everything in her power to be on the field at the Tokyo Olympics.

“That surgery was the best and worst thing that ever happened to me in my life.”

Not only did she end up making the Olympic squad, but she helped the Black Ferns on an unbeaten run to the finals and a thrilling defeat over the French to win the gold medal they missed out on at the 2016 Games.

Through-out Shiray’s life, sport has played an important role in helping her through the dark moments. When she was nine, her parents separated and throwing herself into school sports was her way of escaping the pain.

“Sport was my getaway out of the real world,” she explains. “All of my siblings turned to different ways of healing, and sport was mine.”

Though it was painful to see her parents’ relationship fall apart, Shiray says her mum Sheree, 48, worked hard to make sure they remained a strong family unit.

“Through all the ups and downs, my mum has always been there to pick up the pieces. Not just for me, but for all my siblings as well,” says Shiray. “One thing that always sticks with me, is that even through her divorce, she always allowed us to have a relationship with our dad and half-brothers and sisters. Her kindness towards kids that aren’t even hers gives me inspiration.”

While her big family, which includes 10 siblings and eight nieces and nephews, are her biggest supporters, they aren’t afraid to remind Shiray that she’s still one of them.

“When I’m with them, I’m just Aunty Ray,” she enthuses. “We have races and they beat me, so they think they can be a Black Fern too. But they’re always proud of me.”