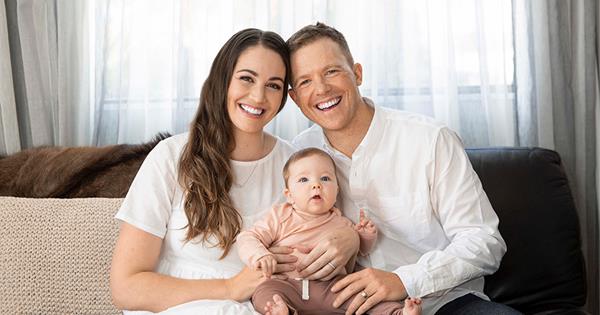 At first glance, Sarah Walker appears to be like any other first-time mum. There are piles of neatly folded baby clothes nearby, a breast pump by her side and mothers’ group appointments highlighted on the calendar.

But look closely and tucked into a corner of the Cambridge home Sarah, 34, shares with her husband Vin Elliott, 33, and their three-month-old daughter Maia, you’ll see the silver medal Sarah won at the Olympic Games in London, along with the trophies the three-time BMX world champion was awarded over her 24-year sporting career.

When Woman’s Day calls to chat, the bubbly brunette has just managed to get Maia to take a nap.

“Maia is a really good baby, but sometimes she’s not that keen on sleeping,” admits Sarah. “She’s very determined to do things, such as rolling from her back on to her belly. If she wants something, she’ll never give up – a bit like her mum!”

Sarah has hung up her bike for the immediate future to focus on raising her first child, a process she jokingly says has many parallels with her years of training and discipline.

“My training’s all about being methodical, so if there’s an issue, I go through a check-list process to figure out what it is and how to deal with it,” the athlete tells.

“I’ve focused on that process with Maia, so if she’s crying, I run though the possibilities of her being hungry, tired,
too hot or too cold. It really does help.”

For someone who’s such a natural mother, it’s a surprise to hear Sarah say that before Maia arrived in April, she’d never held a baby before!

“I have always wanted kids but hadn’t had much experience with them,” she confesses. “I’ve also been pretty busy, spending six days a week training for years, which doesn’t leave time for much else.”

Sarah and hunting guide Vin married in 2019, but they had been thinking about starting a family back in 2016, before Sarah had even begun her four-year training cycle for the Tokyo Olympics.

“I missed out on the Rio Olympics because of a broken arm, so I was super-focused on making it to Tokyo. But
I was also aware that my biological clock was ticking and I didn’t want to leave it too late.”

Sarah came across the anti-müllerian hormone (most commonly known as AMH) test, which can predict how many eggs a woman has in reserve. She tells, “My results were in the 25th centile, which meant my chances of getting pregnant naturally weren’t great, so we decided to try IVF to harvest and freeze my eggs for later use.”

As it happens, they didn’t have to go down that road, with Sarah falling pregnant naturally.

Unfortunately, she didn’t make the Tokyo squad, but she still attended the Games in her International Olympic Committee Athlete’s Commission role – she is currently the only Kiwi athlete to serve on this board.

While she was in MIQ on her return, Sarah began to feel “distinctly average”. She grins, “It turns out it wasn’t jet lag or COVID – I was pregnant!”

Although she had a textbook pregnancy, Sarah didn’t particularly enjoy the experience, especially the physical changes.

She admits, “I’m so used to having full control over my body and its functions, but during pregnancy, I lost that control and it took a concerted effort to accept how my body had changed.”

She and Vin chose not to learn the sex of their baby, preferring instead to be surprised. The sportswoman laughs, “It didn’t matter if it was a boy or girl – I’m a girl who does BMX, so I’m clearly not a strong stereotype kind of person!”

When Maia was two weeks past her due date, Sarah was induced at Waikato Hospital. During the delivery, she suffered a post-partum haemorrhage and lost over 1.5 litres of blood.

“They rushed me into theatre for surgery, followed later by iron and blood transfusions,” she recalls.

“I was in hospital for two nights before I could go to the birthing centre for another three days.

“It was all fine in the end and I’m sure that’s because I’ve had so many surgeries in my life for broken bones, dislocations and plates being inserted, my body was used to the trauma!”

Since getting back to the home Sarah and Vin bought six years ago, the Olympian has been taking it easy.

“So often women are expected to snap back into exercise, but it’s important for me to remember that it’s not about what my body looks like, but what it can do – from being a top athlete to growing a baby,” she says.

Sarah started with short walks, extending the duration as she felt able. “I had my first bike ride recently, when Vin looked after Maia, and I headed out on a road bike, which went well.”

While she’d also dabbled in yoga previously, especially during lockdown, since being on maternity leave, Sarah has been working on viewing exercise as being for her health, rather than elite performance.

That means going at her own pace. She explains, “We’re often told we need to be a certain way or do certain things by a certain time, but I’m accepting being the best I can be each day and seeing where it takes me.”

It’s one of the reasons why Sarah signed up to be an ambassador with Me Today, a Kiwi supplement and skincare brand whose values of “doing your best each day” perfectly align with Sarah’s motherhood journey.

“I’m also working with the Baby On The Move store in Tauranga, who helped us find the perfect car seat for Maia.
I had been doing a bunch of research on car seats, which was quite overwhelming, so getting personalised advice and guidance has been a lifesaver, not to mention everything else they provide.”

While Sarah isn’t sure what her next professional move will be, she’ll definitely be attending the 2024 Olympic Games in Paris in her IOC role.

“I’ll see how I feel when I start riding again,” she says. “To be able to do the cool jumps, you have to go fast
and to go fast, you have to train and be fit, so we’ll see.”

There could also be a move to the South Island at some stage – Sarah has skied since she was just a year old and would love to be close to the Southern Alps.

But as for another baby?

“Well, we still have my frozen eggs, so we could go down that road. But let’s just see how we go with Maia and then decide!”