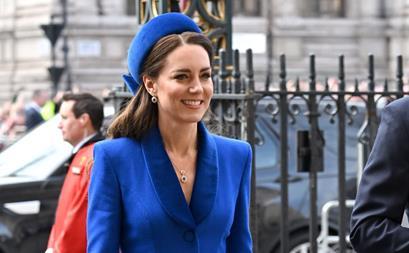 Catherine, Duchess of Cambridge, has stepped out in another outfit honouring Ukraine with Prince William for the Commonwealth Day service at Westminster Abbey.

The royal wore a striking bespoke coat dress by the designer Catherine Walker in royal blue inspired by the country’s flag and paired it with a complimentary Lock & Co hat and Rupert Sanderson shoes.

Her eye-catching ensemble included a nod to Ukraine’s President Volodymyr Zelensky – Catherine donned the same sapphire gold-chain necklace and diamond encrusted sapphire earrings that she wore in October 2020 to welcome Zelensky and his wife Olena to Buckingham Palace.

As per HELLO!’s reports, Queen Elizabeth missed the event as a precautionary measure and practical move, with Prince Charles and his wife Camilla, Duchess of Cornwall arriving at the event in her place.

The Commonwealth Day service was an important outing for the royals as it’s the first time they have celebrated the event in person since the pandemic broke out.

It was also the last public appearance Prince Harry and Meghan, Duchess of Sussex made as senior royals before moving to Los Angeles with their son Archie.

The royal couple spoke with the volunteers and revealed how their children, Prince George, Princess Charlotte, and Prince Louis, are understanding the crisis.

“Ours have been coming home asking all about it,” said William. “They are obviously talking about it with their friends at school.”

Like many parents, the royal father-of-three added that he has had to “choose my words” and “carefully” explain what is happening.

Camilla and Charles have also shown their support for the country by visiting the Ukrainian Catholic Cathedral and meeting with Bishop Kenneth Nowakowski, the Ukrainian Ambassador.

The future King and Queen lit candles, laid sunflowers (the nation’s national flower), and were gifted a sign with “Stop Putin” written on it by a child.

The Queen also gave her support by making a “generous donation” to the Ukrainian Humanitarian Appeal set up to aid Ukrainians by The Disasters Emergency Committee (DEC).