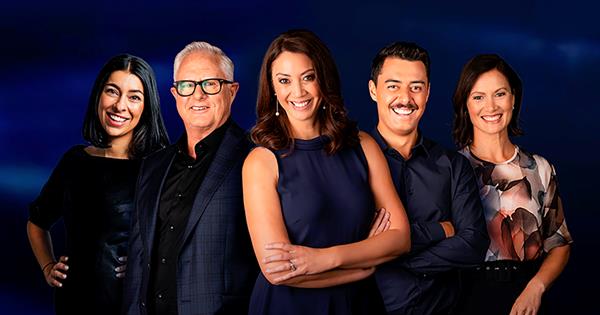 Since its debut in 2002, TVNZ 1’s Sunday has been at the forefront of New Zealand journalism. Covering everything from the aftermath of 9/11 to reporting from inside North Korea. They have also covered stories that hit closer to home like the devastating Christchurch terror attacks.

To celebrate the monumental milestone of 20 years on Kiwi screens, the Weekly speaks to reporters past and present about the stories that have stayed with them long after they aired and their memories of working on one of New Zealand’s most beloved shows.

Cameron Bennett
As both a correspondent and the studio host of Sunday, Cameron Bennett couldn’t have had more varied story subjects during his time on the show. One moment he was interviewing Hugh Hefner at the Playboy Mansion, the next he was reporting out of New York after 9/11.

“It’s hard to believe that one interview that never made the cut was with a brash property tycoon by the name of Donald J. Trump!”

Dad-of-two Cameron, who left the show in 2010, remembers well the “feverish” excitement when Sunday started up. “The team represented an elite band of television journalists. I have a deep affection and lasting respect for my colleagues who were among the best in the game – people like Rob Harley, Mike Valintine, Janet McIntyre, John Hudson, Ian Sinclair and Mark Crysell. Most of us had come up through the ranks of news, Holmes, 60 Minutes, Frontline and Assignment.”

Getting some of its more controversial stories off the ground meant “going head-to-head with management, politicians and hostile lawyers”.

Cameron’s more memorable stories for Sunday include families of suicide bombers in Gaza, the frontlines of civil war in Ivory Coast and the overthrow of Saddam Hussein in Iraq. “I feel very fortunate to have been part of that golden era,” says Cameron. “The Sunday lens was wide.”

Jehan Casinader
Joining the Sunday team in 2016 was such a momentous occasion in Jehan Casinader’s life, he can hardly recall it.

“What first day?” laughs the 32-year-old, who worked on the show full-time until last year and is now a contributing reporter. “My brain has blocked it out, I was so nervous about making a good impression. I was 26 years old and all of a sudden I was working with reporters I had idolised as a kid.”

Jehan has covered a wide range of stories, including the 2019 Christchurch terror attacks. “We jumped on a plane and produced a story in 48 hours. It was a real privilege to cover such a significant event.”

Working for Sunday, he says, is “a total rollercoaster” and he recounts a time when things became even more tense when he and his team left some expensive camera equipment outside a gang pad where they’d been filming.

“Twenty minutes later we panicked and came back,” he laughs. “And someone had taken our stuff inside for safekeeping. Phew!”

Another story Jehan will never forget is when he followed the keepers at Auckland Zoo as they made the decision to euthanise the last two lions in their pride. “We were there as they put those magnificent animals down. It was a heartbreaking moment.”

Jehan is constantly inspired by his story subjects. “Anyone who has the courage to go on national TV, in front of half a million people and share the most vulnerable part of their journey… that takes guts.”

And he also admires the camera crew, some of whom “are happy to film for 10 hours without eating. I need food every two hours, otherwise I get hangry!”

Tania Page
Before joining the Sunday team four years ago, Tania Page worked as a reporter for the Al Jazeera network in London and South Africa for 13 years. Making the transition was challenging but also rewarding.

“Sunday gives me the chance to really get to know people and their stories – to delve deeper than I’ve ever gone before,” says Tania, 43, who is of Ngāti Kahu and Ngāi Tahu descent.

One of her first stories for the show was about New Zealand’s working poor – “people who work full-time but can’t make ends meet” – and another of her most memorable pieces involved a meeting between grieving father Iafeta Matalasi and Shane Harrison, a Mongrel Mob member convicted for taking part in the murder of Iafeta’s son Sio.

“His [Shane’s] appearance – tattoos over almost every inch – is designed to intimidate but he wanted to turn a corner in his life and had agreed to meet Iafeta, who had already forgiven him,” says mum-of-two Tania. “For as long as I live, I will look back at the kōrero we had in his prison cell. Behind every mark on his skin was a tale, a statement, and behind his eyes a life so different to my own – but we were still able to connect with honesty and authenticity.”

Half of Tania’s time at Sunday has been spent working under the restrictions of the Covid pandemic.

“I didn’t think I’d be writing this many scripts barricaded in my bedroom so my kids can’t find me, that’s for sure!” she laughs.

“Sunday is pretty consuming. Once the seed of an idea is planted, it can be weeks, often months, before it gains traction let alone starts filming. We sometimes laugh that a Sunday story starts off with a fantastic idea, next we fill ourselves with doubt, then we talk ourselves out of it completely before gradually climbing back on the horse. But it’s a process born ultimately out of wanting your
story to be the best it can be.”

Mark Crysell
Crossing the divide into North Korea in 2018 to report for Sunday is an experience Mark Crysell will never forget.

“It took 18 months of negotiations to get into places no foreigner had even been,” says the veteran reporter. And even more challenging was the reality of finally being given the green light because “once you’re inside, there’s nothing anyone can do if something goes wrong. It was like going to the moon.”

Before becoming a journalist, Mark did everything from driving a bulldozer to prospecting for gas and oil in the Australian desert. It’s those experiences, he believes, that helped him relate to people from all walks of life. And he says two full-time stints on Sunday – between 2002 and 2008 and from 2016 onwards – have also taught him, “How the tragedies in your own life leave you with the gift of empathy, to not be frightened of being yourself, how important it is to listen… and how the older you get, the less respect you get from your workmates!”

Taranaki-raised Mark, 61 – dad to eight-year-old daughter Edie – says “going into people’s lives when they’re at their lowest ebb” can be challenging, but working for Sunday is “a privilege that I try to never take for granted”.

The show’s producers, camera people and editors, he says, are “the secret herbs and spices that make us a team and that, to me, is the secret of Sunday‘s success and longevity.”