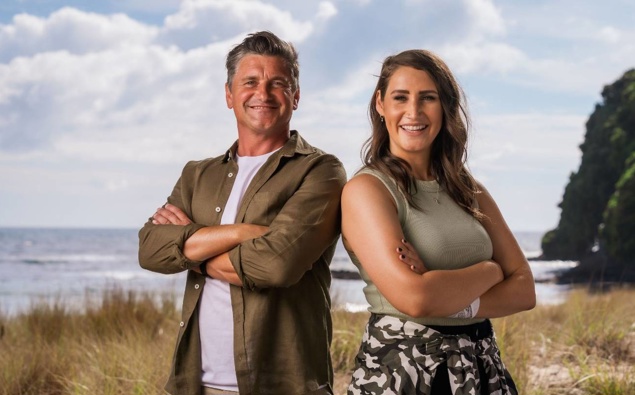 As a fresh season of Celebrity Treasure Island gets set to wash up on our screens, the first round of local celebrities about to battle it out on a beach in Northland has been announced.

From a comedian-turned-mental health advocate and his offspring, to New Zealand’s finest squash player, this year’s contestants are a varied bunch who should make for entertaining reality TV viewing as they become “castaways” vying to win $100,000 for their chosen charities.

At 25, singer, actor and radio host Alex King could find youth in her favour, especially when it comes to the show’s physical challenges. Competing for the charity I Am Hope, she’ll also have the support of her dad, mental health educator and ambassador, Mike King. The former comedian has been announced alongside his daughter and intends to win the show for his children’s mental health charity, Gumboot Friday.

While the Kings may find strength in family, they could still be no match for the backhand of former world champion squash player Dame Susan Devoy. She joins the competition in the hopes of winning for The Aunties, a collective established to support whānau who have lived with violence.

However, Devoy isn’t the only contestant with a history of sporting prowess. Former All Black Ron Cribb brings a special addition to the show, playing for not only his own charity, Stand for Children, but also the charities of the late, great, Va’aiga ‘Inga’ Tuigamala: ODICE and Alliance Health Plus.

What Cribb brings in brawn, comedian and screenwriter Guy Montgomery is expected to match in wit. Said to be taking this season’s “treasure hunt” very seriously, the funny man hopes to secure a win for the Auckland City Mission.

And the final famous face announced today is none other than Siobhan Marshall, perhaps most fondly known as Pascall West from Kiwi cult series Outrageous Fortune. While it’s unknown as to whether Marshall will work any leopard print into her castaway look, it appears there could be some animal instinct employed as the actress aims to win big for charity organisation SPAW (South Pacific Animal Welfare).

While more castaways will be announced this week, overseeing the competition are hosts Bree Tomasel and Matt Chisholm. The pair will keep contestants on track as they rise to the challenge of this year’s theme: the mystery of the missing cargo.