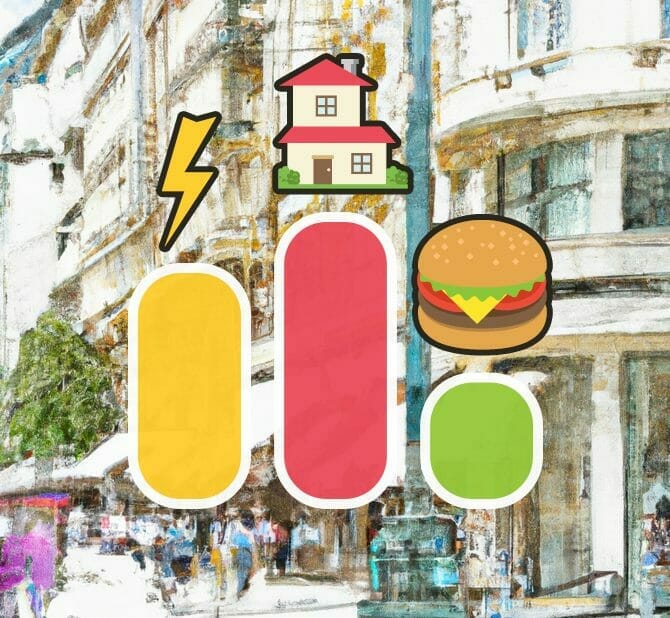 Due to crises, like Covid, inflation, and war, the cost of living is on the rise almost everywhere in the world. But how much does it cost to live in the most livable city? How high are the average rent or food prices in Vienna? According to a new Mercer study, Vienna ranks 21st, between Honolulu (US) and Qingdao (China), as one of the most expensive cities. But how expensive is Vienna really and at what salary can you comfortably live in the city of Mozart?

As you can see, Vienna is quite pricey if you don’t move from one of the top 20 most expensive cities to the Austrian capital. But every person leads a different lifestyle. If you don’t go out a lot and live in one of the outer districts, you can save around 20-40% on your costs. Let’s break them down:

Average rent in Vienna – the most important cost of living factor

A tip to protect yourself from high rent prices in Vienna

Most areas in Vienna can be reached by public transportation in under 30 minutes. If you are sporty, the bicycle infrastructure is getting better each year. That’s why moving to a cheaper district and avoiding insane commute times (if the right tube station is nearby) is still a sound cause of action.

With rising gas prices (Around 50% of all flats in Vienna heat with gas) utility costs are currently heavily fluctuating. According to Statistik Austria, utility costs were at around €2.3 / m² in an average Viennese flat. This is backed up by LivingCost.org, which estimates the utility costs at around €140 for a single person and €220 for a family. Numbeo goes a little bit higher and estimates utility costs for 85m² at €220.

Tips to safe on utility costs

If you are concerned about gas fluctuation, know that most newer “Neubau” (not to be mistaken for the district) flats avoid gas heaters. Officially, it will be illegal to install gas heaters from 2025 onward.

Eating at home – average prices for food in Vienna’s supermarkets

Eating out – average prices for restaurants in Vienna

*The Big Mac Index by the Economist compares the purchasing power parity (PPP) of countries. The idea is that McDonald’s has restaurants all over the world and the Big Mac is sold worldwide. As it is standardized in size, composition, and quality it makes for a great cost of living indicator for Vienna and other cities. If you move to Vienna on a business visa and already know how much you will earn, you can compare the burger price in Vienna with your new salary vs. the old one.

Where the prices for food in Vienna are lower

If you like to cook, ingredients can be purchased at a lower cost from discounters like “Hofer” and “Lidl”. If you are in financial hardship, there is also the Vinzi Markt that provides extra cheap food for people in need. A great cost reduction when the expenses of living in Vienna seem challenging.

Behind the statistics: Is Vienna getting more expensive? The cost of living in Vienna is rising.

A recent TU Wien (Technical University of Vienna) report examining trends in Vienna’s private housing market has found that the share of affordable rental apartments has significantly decreased since 2011. After analyzing 10,300 real-estate advertisements posted on derstandard.at between 2011 and 2019, researchers found that while low-income households have struggled for years, finding affordable housing is increasingly felt by middle-income households as well.

Defining “affordability” as no more than 30 percent of a household’s monthly income, the TU’s Mietmonitor (rent monitor) found that even those earning around the national average can only afford apartments on the city’s outskirts. An interactive rent tracking system, The Mietmonitor allows you to input your monthly income and see a map of Vienna showing where you are most likely to find an apartment. “Most people can’t afford to be picky about their flat’s location,” says Justin Kadi, a housing researcher who worked on the project.

A sharp decline in affordability

The TU’s study also indicated a sharp decline in affordability since 2011. For example, a single-person household – which is most affected by rising rents – could afford around 27 percent of listings in the 2nd district between 2011 and 2013, a number that fell to a little over 10 percent by 2019. Living space for an average household by district also varied sharply: For instance, the average single-person household in the 6th district is about 24 square meters, while a flat for a comparable price in the 23rd would be 33 square meters.

More troubling is the fact that the average living space for one person is 29 square meters in Vienna as a whole – yet city building regulations prescribe a minimum of 30 square meters for one-person households, raising the question of whether current legislation intended to cap rents in Altbauten (old buildings) is indeed being enforced.

The data collected by the study doesn’t go beyond 2019, so how the COVID-19 pandemic has influenced the market is a matter of speculation. Nevertheless, we are already starting to see the effects of the past year, with 17,000 people in Austria currently facing eviction. A law allowing tenants to defer rent payments from the second quarter of 2020 to a later date expired in March, meaning that those in arrears will have to balance their accounts as well as keep up with current bills – a challenge for many amid Kurzarbeit and record unemployment caused by the pandemic.

It should be noted that the TU’s study only takes rents in the private sector into account, which only constitutes 40 percent of the real estate industry in Vienna: Most available apartments are a part of social housing projects with controlled rents.

A challenge for new arrivals

That is little consolation for recent arrivals from within Austria or abroad, however, as Gemeindewohnungen (social housing) only become available after residing in Vienna for at least five years. If current trends continue, newcomers will soon be completely relegated to the city’s periphery, if they manage to find accommodation at all.

Excluding rent, a single person pays about €900 per month for goods and services. A family of four can estimate about €3000 per month (+ rent).
In comparison to other places, Vienna is one of the more expensive cities in Europe, comparable to Dublin or Rome. However, its costs of living are still far lower than in European Metropoles like Paris or London. For people with high-paying jobs, like lawyers or developers, the rent-controlled city will seem quite affordable.

How expensive is Vienna?

You can calculate about €900 for your monthly costs and add between €500 (shared living) and €1000 (high-class flat) if you plan to live in one of the hipper districts.

What currency does Vienna / Austria use?

Vienna, like most places inside the EU, uses the Euro as currency.