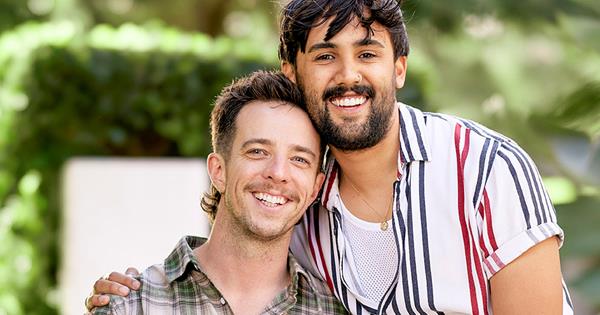 Eli Matthewson is always quick with a joke, but even the Kiwi comedian couldn’t find a gag to raise the mood when he was shockingly eliminated from Dancing With The Stars NZ last week.

The viewer votes came in and, just like that, he went from crying tears of joy about being part of New Zealand’s first same-sex pairing on the popular reality series, to shedding tears of sadness that his time on the Three show was over.

Now Eli, 33, is throwing himself back into his “day job” as a radio host on The Edge Breakfast – and the consoling arms of his partner Sam Clack. If there’s one silver lining to his elimination, it’s that the couple will now have more time to enjoy the new home they’ve just bought together after two years of largely long-distance dating.

“I’m gutted – absolutely devastated,” admits Eli. “I just wanted to keep dancing because I’ve been having such a good time. I can’t help but feel I had so much more to give. I’m pleased we could bring attention to my charity, OutLine, and it was such a crazy honour to be the first two men dancing – I bloody loved doing it. But I’m also at peace with it because I wouldn’t have done anything differently, so it’s not like I could have changed it.”

Eli had already shed tears on the show after seeing the impact his same-sex partnership with professional dancer Jonny Williams was having.

“It’s unbelievable the messages that I’ve received,” he tells Woman’s Day. “There was a TikTok video of me and Jonny, and one of the comments was, ‘I came out to my parents today because I’ve been watching you guys.’I know that if I’d seen this when I was 14, it would have made a huge difference.”

At his high school in Christchurch, there were only a few out gay people. “They got bullied,” recalls Eli. “Even my best friends made homophobic jokes, so voicing that I had those feelings was so scary.”

Partly as a result, Eli didn’t publicly “come out” until he turned 21. He hopes the charity he danced for, OutLine Aotearoa, can help people feel more comfortable with their sexuality.

“Even if you’re in the smallest town and there’s not a single other queer person, you can call them to have a judgement-free conversation with someone who’s queer and won’t tell anyone. It’s for any age, actually, which is really important to me because my dad didn’t come out until his sixties.”

Eli is proud that he was able to showcase how ballroom dancing has evolved from the traditional male-female partnership.

“Neither of us was the woman – it was just two men dancing,” he smiles. “We felt a lot of joy in the moments we were creating and Jonny is the most incredible teacher – it definitely wasn’t something
I’m naturally good at.”

And his boyfriend Sam cannot help but agree.

“I was honestly gobsmacked when I saw his first dance,” the 29-year-old confesses.

“It wasn’t a talent I expected or one that’s come naturally to Eli. I always used to joke that he dances to the lyrics rather than the beat, so to see him glide on that stage was so impressive.”

The couple met on a flight from Auckland to Wellington five years ago. Sam was returning home after Christmas with his family, while Eli was heading to celebrate New Year’s Eve with friends.

Eli remembers, “He sparked up a conversation – I’m way too shy for that. His family theme their Christmases and had just done a Greek one – they all wore togas and ate Greek food. I was immediately obsessed. I thought he was the coolest person I’d ever met.”

For Sam, the connection was instant too. He recalls, “Eli was wearing a Beyoncé cap, which hooked me in pretty quick. He was funny and charming, and had a lovely smile. That was enough to start the ball rolling.”

They both caught the bus into Wellington’s city centre, but Sam’s stop was before Eli’s, so he “accidentally” left his boarding pass on his seat. Fortunately, Eli took the hint and found him on Facebook.

“We fell in love pretty quick,” the radio star shares. “I can’t even remember who said it first… No, it was me. I said it first!”

They dated for six months before Sam moved up to Auckland, doing his PhD studies long distance. But he had to return to Wellington for two years of clinical psychology placements and, with COVID, they spent many months apart.

“We wanted a house with character,” enthuses Eli. “There’s an amazing round window out into the garden, which has a working water fountain, and the kitchen has a built-in table with a little booth. There’s nothing we want to change, which is very lucky because we’re not renovation people. We don’t like getting our fingers dirty!”

It feels luxurious not having to squash both their possessions into a single bedroom of a shared flat, says Sam, adding, “Our perfect night in is a takeaway curry, a bottle of wine, jumping into our robes and watching the telly. We also love playing chess, but we’re both quite competitive, so we’ve put a temporary ban on it because our last game took three days to finish.”

Of his partner, Sam gushes, “Eli is incredibly patient and hardworking. I’ve never met someone who is so generous with himself and his time. He’s spent so many years working behind the scenes to help other people’s careers thrive and so it’s lovely to see him have a moment to shine.”

Eli’s time on DWTS might be up, but his workload hasn’t let up. In between his shifts on The Edge, the two-time Billy T Award nominee is busy preparing a show for the Edinburgh Fringe Festival in August. He says, “I’ve written so many jokes for other people to say, so now it’s time for me to be the person to say them.”

And after Scotland, it’ll be time to turn their thoughts to setting the theme for the next Clack family Christmas.

Sam grins, “We’ve done Greek, French, the 1970s and roaring ’20s, so I’ve pitched ‘Under the Sea’ for the next one – think seafood and mermaid costumes. I’m not sure I have the buy-in from the family yet!”

For more info on OutLine or to donate, visit outline.org.nz. To talk to a trained volunteer from the LGBTIQ+ community, phone 0800 OUTLINE between 6pm and 9pm.

Dancing With The Stars NZ screens 7.30pm Mondays and 7pm Sundays on Three.