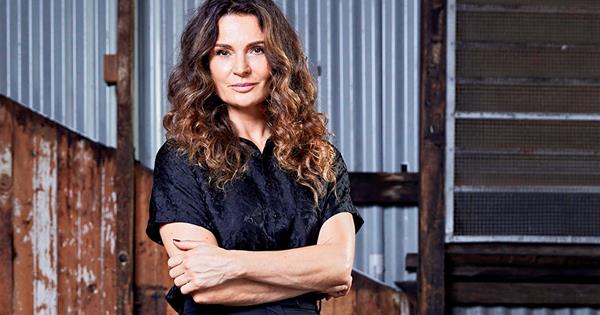 Kiwi actress Danielle Cormack is quirky, funny and full of energy. As she chats to the Weekly, she pauses briefly to show her two new guinea pigs sitting next to her. She also apologises for being a bit tired because she has just done a five-hour recording of an audiobook she’s reading “and I still have no idea what it’s about!” she laughs.

But one thing which is always clear about Danielle is her advocacy work and in this case her work for ChildFund, for which she has been an ambassador since 2006.

At the moment, it is all about Ukraine because since late February, when the Russian invasion of Ukraine began, 90 percent of the five million people who have fled the country have been women and children, and half of those women are travelling alone.

Danielle is soon to head off to Moldova, which is on the border of Ukraine, where she will be working on the ground to help these women and children.

“ChildFund has partnered with a sister agency who are on the ground there, and we’re involved in offering psychological support for kids, giving them toys and colouring books to distract them from the things that are going on around them,” she explains. “And because they’ve been displaced, getting them clothes, nappies and baby formula – basic essentials.”

When she gets there, it will be hands-on, getting footage to share with the world and encouraging people to sponsor children who need help.

“For me, part of my advocacy work is that I need to become part of something and experience that first-hand,” she tells. “I’d find it a bit tokenistic to lend my voice to something that I haven’t actually experienced. For me, it’s a matter of saying, ‘What do you need? What can I do?'”

And when she gets back home, it is time to download.

“Whatever I’m feeling after the fact is only an iota of what those families who have been displaced or starving or don’t have access to clean water are feeling. I first realise how privileged I am that I get to walk away and come home. But I try not to be too comparative. There’s no use doing that.

“Being there in the zone, where they are getting the help and seeing how effective it is and that it is solving some of their distress, means a lot to me.”

Danielle has always done advocacy work which involves children, partly because she is a mother of two, to Ethan, 25, and Te Ahi Ka, 12. Both boys are living in Sydney – Te Ahi Ka with Danielle and Ethan is flatting.

“I think some of the time the boys are thinking, ‘She’s not like that with us!'”

But Danielle’s advocacy work came well before she was a mum. Thirty years ago, when she was Nurse Alison Rayner on our beloved soap Shortland Street, she would go up to Starship Children’s Hospital and read books to the young patients.

“I met and became really close to quite a few families there and I still have a relationship with them,” she says. “It was so easy for me to take a little time out of my day or weekend, and meet these amazing warriors and their families.

“A lot of them were from out of Auckland and had been uprooted from their communities in other parts of New Zealand, and some of those families were struggling to travel there,” she recalls.

“So I was there to give the parents a breather and bring some joy to a kid who probably had no idea who I was!”

Despite being an in-demand actor, for the past three years Danielle says she has been focusing more on producing and script consulting, as well as doing more behind-the-scenes work. She has a play at the Belvoir Theatre in Sydney in a couple of months, she’s off to the Cannes Film Festival after her trip to Moldova to sell a script for a movie she’s producing and she even found time in lockdown to direct a play in New Zealand via Zoom at the Soho theatre called One Brilliant Thing.

“I really prefer working with scripts and directing and producing, but having said that, if anyone is reading this and they want to hire me as an actor, I’m still keen!” she enthuses.

But one thing is always the same for Danielle – who also likes to ride a Harley-Davidson motorbike in her free time across Australia – she’s super-busy, joking about how she needs a personal assistant.

“Just someone to pay my bills and, actually, that floorboard that’s wonky, could you get that fixed and would you mind looking after my son when he’s sick and can’t go to school and I have to work?!” But for now, she’s focused on Ukraine and her advocacy work.

“For me, that’s where my interest lies, rather than learning lines to play weird characters.”

ChildFund is providing Mum’s Packs containing food, formula, nappies and hygiene items to women across Ukraine. Text MUM to 2474 to donate $3 or visit childfund.org.nz/ukraine-mums to send a Mum’s Pack today.

ChildFund is part of an international alliance that helps 23 million vulnerable children, their families and communities in more than 70 countries around the world.