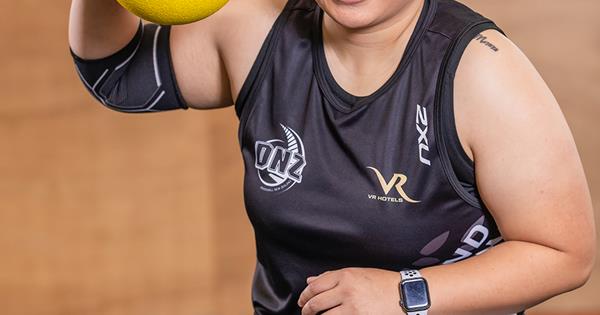 When Ben Stiller’s raucous comedy Dodgeball: A True Underdog Story hit cinemas back in 2004, audiences were rolling in the aisles at the jokes and hijinx both on court and off.

And while Aotearoa is a proud sporting country that loves to support its national teams from rugby and netball to cricket and hockey, it seems dodgeball could, any day now, be added to that list!

She’s part of a strong national body that is trying to grow the sport across the country in the hope that dodgeball players could become as popular as All Blacks or Silver Ferns.

“It’s a sport for everyone and is not as scary as it looks,” enthuses the Auckland player. “It’s a growing sport here, especially in the bigger cities. We’re also working towards growing it in smaller centres and in schools.

“It’s a sport that requires teamwork, and it’s also a perfect way to let out all of your anger and frustration.”

Unlike the Dodgeball movie, in which a group of misfits enter a tournament to save their cherished gym from being turned into a car park, Celina says the Kiwi players representing the sport take the game very seriously indeed.

They’re currently preparing to compete at the Dodgeball World Championships held in Edmonton, Canada, this month.

“We’re taking three teams to the world championships – a women’s team, a men’s team and a mixed team,” tells Celina, who works at the Ports of Auckland. “It’s a huge achievement for New Zealand to be representing dodgeball on the world stage. It shows how the sport is growing and the hard work we’ve put into representing our country with pride.

“Our players are a mixed bunch from all different backgrounds and occupations,” she says. “We’re teachers, students, accountants, lawyers – all sorts who have come together because we love this sport.”

Hong Kong-born Celina moved to Auckland with her family when she was five. She grew up playing badminton and basketball. As an adult, she wanted to be involved in a sport where she could be social and meet new people – and she discovered dodgeball.

“I downloaded an app called Meetup,” she recalls. “It’s a social app where people who want to meet others and try different activities and sports can sign up. There was a group of people wanting to join and play dodgeball, and that’s how I got started.

“I missed that community feeling that sports provided. Having a week- day sport to play was really fun and my team ended up becoming my close mates.”

While she might have started her dodgeball career with fun times in mind, however, Celina soon discovered the game brought out her competitive side.

“The more I played, the more I understood the roles involved, and I realised it was a very serious and competitive sport,” she laughs.

The game involves two teams of six players, with each player trying to hit other players with balls while at the same time avoiding being hit.

It’s a popular game in playgrounds around the nation and also in PE classes, helping to develop balance and hand-eye coordination in young children.

“Because we all played it at school, I have all these happy memories of dodgeball,” says Celina.

She was proud to have been named the captain of the New Zealand women’s team this year, and says they face stiff competition from opponents from the US, Malaysia and our arch rivals – the Aussies.

“The Dodgeball movie with Ben Stiller gives people a rough idea of what’s involved, but when you actually play it, you get a much better idea,” she says.

“A lot of people think it’s a free-for-all and just throw and aim. But really, there’s a lot more strategy involved.

“Preparing for the world championships, our team is watching as many videos as possible, so we can study the different styles of play. We have set ourselves a goal to make top four – or, even better, to come home with a World Championship.

“We want to act and compete in a way that will make our friends, family and our whole country proud that we are representing New Zealand.”