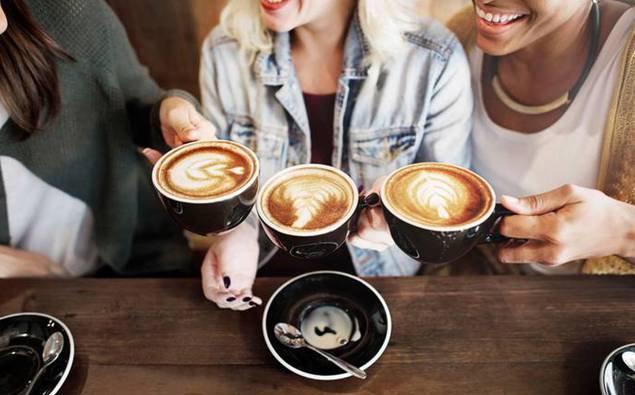 One of your new year’s resolutions might be cutting your caffeine intake – but it turns out coffee has some surprising health benefits.

A decade-long study suggests drinking as many as three cups of coffee a day could help you live longer.

The study showed regular coffee drinkers were up to 12 per cent less likely to die and up to a fifth less likely to get cardiovascular disease or a stroke.

But if you want to harness the health benefits, then it’s time to ditch the instant coffee in favour of the real stuff, according to the experts. The research also found that drinking more than three cups a day doesn’t have any good effects on your health.

There are countless studies with contradictory claims that coffee can either harm or benefit your health. It contains minerals and antioxidants, often linked with reducing the risk of type 2 diabetes, dementia and cancer.

But other studies showed an increased risk of high blood pressure and cardiovascular disease was associated with the drink.

This latest study, from academics at Queen Mary University of London and Semmelweis University in Hungary, suggests that coffee actually has cardiovascular benefits and does not increase blood pressure.

One of the study’s authors, Dr Steffen Petersen, said the results show moderate coffee intake is “not cardiovascularly harmful and may even be beneficial”.

He added that “to the best of our knowledge, this is the largest volume of research to date focusing on the cardiovascular effects of coffee consumption.”

Participants in the study were aged 56 on average and were followed for 11 years, allowing experts to analyse the differences between groups.

Twenty-two per cent of them were not coffee drinkers, while 58 per cent drank up to three cups a day.

Results revealed those who drank between half a cup to three cups a day were 12 per cent less likely to die than non-coffee drinkers by the end of the study.

Those who drank over three cups a day were no more likely to suffer from high blood pressure, which has been a concern in previous studies. However, their mortality rate and the likelihood of strokes or cardiovascular disease were similar to those who didn’t drink coffee. This suggested that three cups a day was the maximum amount people can consume to benefit their health.

Researchers did not detect any increase in high blood pressure rates among daily coffee drinkers, quelling fears that the drink triggers the condition.