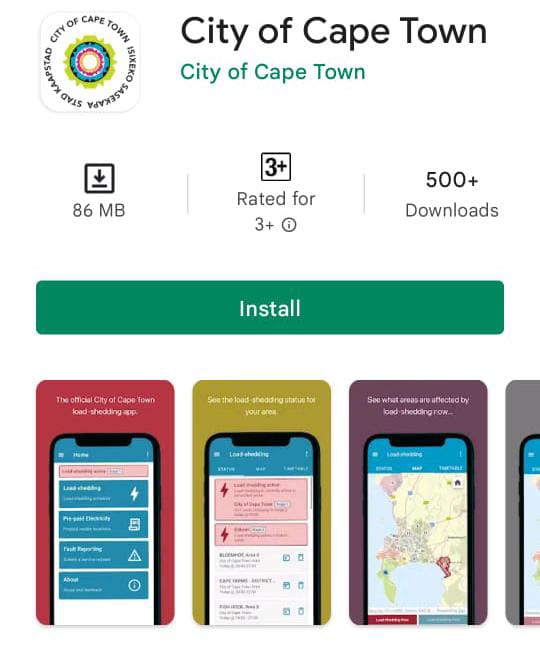 Only South Africans would find themselves in the position where the market for apps that tell you when the power is going out, is becoming saturated. Many South Africans rely on the tried and tested EskomSePush app to get their load shedding information. Now, the City of Cape Town has decided to enter the ring.

The City of Cape Town launched its app on Thursday the 13th of April. And based on the description and testing, it seems to be very very similar to EskomSePush.

The one key difference? It allows City customers to log service requests directly via the app. That certainly comes in handy.

“The app keeps customers updated with the City’s load-shedding schedule by adding their area or suburb via a map, their current location, or by searching the search box. Customers view their area’s load-shedding status and timetables, use the app to log service requests with the City or find vendors selling prepaid electricity.”

Hill-Lewis has described the app as “innovation being born from crisis”. It is available on both the Apple Store and Google PlayStore.

Herman Maritz is the co-founder of EskomSePush. He took to Twitter on Friday night share some of his takeaways from the City’s new app.

According to Maritz, while it is not hard or expensive to build a load shedding app. It gets trickier when it comes to constantly running and operating it. Maritz is even offering to work with the City on the next version of its app.

So while the City of Cape Town may have started off with its app seemingly focused on load shedding, it seems the app could quickly expand.

Querying and logging issues with rates accounts and drain blockages all handled over one app?

It would be quite something, wouldn’t it?

The City of Cape Town activated its full disaster and rescue management team on Saturday evening. A fire broke out in the early evening in the Joe Slovo informal settlement of Langa. Within minutes, the blaze engulfed several shacks and quickly began to spread.

According to City of Cape Town Mayoral Committee Member for Water and Sanitation, Zahid Badrooidien, 12 fire engines were on the scene. Four water tankers are also being utilised. Law Enforcement and Traffic Services are in the area working with firefighters attempting to save lives and homes.

Badroodien says the fire was still “uncontrolled’ at 8PM on Saturday. No information as to the start of the fire has been made public yet.

Gift Of The Givers team members are on standby to enter the area with supplies as soon as the fire is under control.