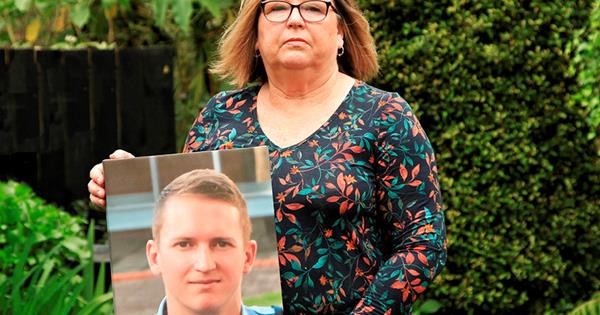 On a quiet Friday afternoon last year, Diane Hunt was happily prepping dinner for her son Matthew Hunt, a young constable with the New Zealand Police, who’d planned to visit after his shift.

She’d bought fresh ingredients to make his favourite salmon and pasta, before sitting down to enjoy a cup of tea and read the news. But the 28-year-old never arrived. During a routine traffic stop in Massey, West Auckland, Matt was shot and killed.

“I was looking at a news website when that red line came across the top and it said two police had been shot in Massey. I thought, ‘Well, Matthew doesn’t work in Massey. He told me he was working on the Auckland Harbour Bridge,'” recalls Diane, 63, sharing her heartbreaking story exclusively with the Weekly. “I thought, ‘How awful because Matthew will know who they are.’ Then it said one of them was dead, so I texted him and asked if he was okay, and he never replied.”

On June 19, 2020, Diane’s precious son was shot in the back four times and left on the road to die, as his killer fled the scene in a getaway car. The crime shocked the nation and stripped the hospital administrator of her only son, who she describes as a hard-working, modest, well-liked and compassionate young man.

“I opened the front door to see police and just cried, knowing it had to be Matthew,” Diane sobs, remembering the moment she learnt the slain officer was Matthew. “I had disbelief for a long time. Going through the funeral, it’s very hard to believe your own son has died. Having raised my children on my own, I was looking forward to watching Matthew grow in his career and live up to his potential, both professionally and in his personal life. But now it’s not going to happen.”

Eighteen months on, Diane is still coming to grips with losing Matthew, who served as a police officer for two-and-a-half years, working mainly on the frontline in Orewa, on the Hibiscus Coast where he grew up, before being transferred to Auckland Harbour Bridge Police Station.

Her son’s murderer, Eli Epiha, 25, was fleeing from police when he crashed his car that afternoon, hitting and injuring a member of the public before Matthew and his partner Constable David Goldfinch arrived. When the duo saw thick smoke coming from the wrecked car, they expected to find a driver in need of first aid. But in a terrifying 31-second window, the shooter fired 14 bullets, seriously injuring David and taking Matt’s life.

“I never in my wildest dreams thought there are people in our country who drive around with two military-style firearms and casually try to murder two police officers who’d come to their assistance,” says Diane, whose son called comms advising them of a gunman before he exited the police vehicle. “Matthew had no other option that day other than to try and run away.”

Eli Epiha was sentenced to life in prison on December 10, with minimum non-parole of 27 years. Diane says, despite it being among the longest sentences ever handed down by a New Zealand court, it won’t bring Matthew back.

“For the next 27 years, he won’t be able to point loaded guns at police officers and pull the trigger,” says Diane, who turned to Matthew’s killer during her victim impact statement, saying how she spent time with her son’s ashes, surrounded by his pictures, though it wasn’t enough.

“This has to be a sense of relief to police officers although, unfortunately, there are other criminals out there to take his place.”

Diane learnt the long-term Bloods member had been out of jail just seven months on the day of the tragic shootings, following another firearms incident. “We’ll never be the same people we were before this cold and callous murder.”

Getaway driver Natalie Bracken, 31, was found guilty of being an accessory after wounding with intent to cause grievous bodily harm, and jailed for 12 months on October 1.

“I’m so pleased the jury saw through her lies and she was found guilty. She saw my son dead on the road and went into the house and got the keys and drove the murderer away in her friend’s car,” says Diane, who launched a petition with help from the Sensible Sentencing Trust, seeking mandatory life sentences without parole for people convicted of murdering a police officer. It received almost 40,000 signatures.

“Natalie and her friends never rang 111 or went to check on my son to see if they could help him.”

Now, Diane’s focus is remembering everything that makes her proud of Matthew, who she raised as a single mother, along with her daughter Eleanor, 26. Before the young constable studied criminology at university, while juggling work at an after-school care provider, he stacked supermarket shelves.

“Matthew didn’t have a free ride through life,” says Diane, who worked all types of jobs over the years to make ends meet. “As a kid, Matthew had a paper run and on a Sunday morning at six, we’d go out and race each other up and down the streets of Orewa in the dark. Both of us hated it, but it gave him pocket money.”

Matthew was around 13 when he said he wanted to join the police. Thanks to the husband of a leader at his sister’s Girl Guide group, who was an officer for Orewa Police, Matthew was invited to look around the station. By 22, he had secured a job as a case manager at Auckland Prison, offering prisoners guidance and courses to finish their sentences early.

“He was good at the job because he was methodical and paperwork was always his thing. I once asked him if he was scared working there, and he said no because he genuinely felt he had the capabilities to offer support and be of service,” Diane shares. “He was such a nice person and there was no pretentiousness about Matthew. If he talked to you, he listened and you knew he listened. He never judged anybody.”

Before he joined the New Zealand Police, Matthew ventured to London with friends for an OE, where he worked for the Nursing and Midwifery Council, and then the travel company Contiki.

“Everyone always wanted him to keep working for them and Contiki asked to employ him as a tour guide,” says Manchester-born Diane, who visited her son while he was away from 2015 to 2017. “But it meant six months of the year travelling around Europe, which he turned down to come back to New Zealand and join the police.”

By the time Matthew completed two years as a probationary constable, making it to constable status, he was flatting in Hobsonville and looking to buy a new ute, having paid off his student loan. He was passionate about looking after his health through diet and exercise, and enjoyed CrossFit.

“Matthew loved looking his best. He was tall with beautiful blue eyes and being so modest, he had no idea how handsome he was,” tells Diane. “We’d message each other most days and always ended it by saying we loved each other.”

In a bedroom at home, Diane still has the uniform her son so proudly wore, along with his personal belongings. She took Matthew’s police hat with her everywhere for a while after his death, just so he could be with her in some shape or form. “Everything is hard. I look at his friends and see some of them are pregnant or just bought their first house, and I’ve been to a wedding when Matthew should’ve gone,” says Diane, who treasures memories of her boy telling her he was proud of her. “All these things hurt.”

In her quest to honour her son, Diane recently accepted an offer from New Zealand’s Pilgrim Bandits to name one of their courses the Matt Hunt Programme. The charity provides first responders suffering from mental and physical crises a place to heal, through team building and challenges, and activities like canoeing and hiking.

“Mark Appleton from Christchurch contacted me, who is a trustee of the Pilgrim Bandits charity, which was founded in the UK,” she tells. “I like it because it’s about helping people overcome life obstacles through friendship and camaraderie, which resonates with Matthew and what he would’ve done.”

There’s also a memorial bench and plaque, along with a newly planted kōwhai tree, at Orewa’s Remembrance Reserve. The plaque describes Matthew as a loved son, brother, friend and colleague, who’ll always be remembered.

“Now I’ve got to keep going with the petition, which was presented to Parliament in December 2020, and we will be presenting it to the select committee early in 2022,” says Diane. She launched the petition on the day her son should have turned 29.

“Matthew was just a lovely young man who worked hard to achieve what he had. I think about him every day and cannot explain in words how much I miss him.”