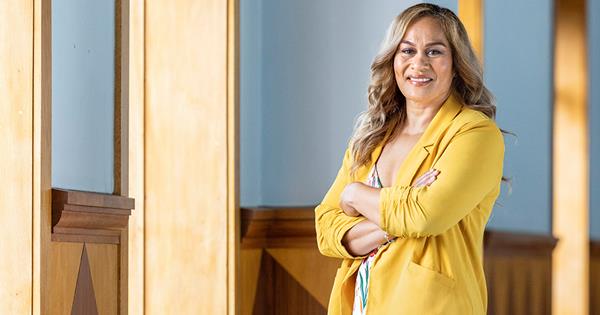 The inspirational rugby star is tackling a prestigious new leadership position, where she’s teaming up with other legends of the sport

Former Black Ferns captain Seiuli Fiao’o Fa’amausili will never forget the day she led the New Zealand women’s rugby team to victory in their World Cup-winning match against England in 2017.

The Samoan-born sports star held up the World Cup after the finals in Ireland and couldn’t stop the tears streaming down her face. Her raw emotion acknowledged the hard work and sacrifice made by her team but also something more personal. Her day of victory also coincided with the 16th anniversary of the death of her father Tavita.

“My father was my biggest supporter, but he didn’t live to see my debut in the black jersey. He was sick with a heart condition, but that didn’t stop him from supporting me at all of my club games,” says Fiao’o, who is the most capped Black Ferns player and has competed at five rugby World Cups.

“Even if it was raining, he would turn up to my games, sit in the van and toot the horn. That’s why I played for as long as I could. I was playing for him. He gave me that drive and determination.”

Recently, Fiao’o, 41, reached another milestone that would have made her father extremely proud. In December, she was elected the first female president to lead the Auckland Rugby Union – one of the most prestigious and successful rugby provinces in Aotearoa.

“It’s a huge responsibility. But we have to take any opportunity that allows women to be in positions that are normally dominated by men. It gives us a chance to step up because everyone knows that women can rise into leadership positions.”

Fiao’o is breaking down barriers in her day job as well. She’s in the police force, working as a detective constable in the Auckland district of Counties Manukau. “I actually wanted to be an undercover detective, but I couldn’t do that because my face has been on TV and I have a public profile.

“Having rugby in my life helped me in my career because it gave me discipline and taught me the importance of working in a team.”

In her new role with Auckland Rugby, which she took over from former All Black Eroni Clarke, Fiao’o often interacts with other sporting legends such as Sir Michael Jones, Sir John Kirwan and Grant Fox, and is on the board with Keven Mealamu. During her tenure, she plans to promote the importance of grassroots rugby and women in sports.

“Sports helped me stay away from trouble. You get into trouble if you don’t have a sense of belonging. Sports provided me with a lot of possibilities.

“I want to focus on our young players at the club rugby level because that’s where it all starts. We can’t forget our grassroots.

“It’s also a privilege to be working alongside all of these legends of the sport. These are people who I’ve seen on posters and who I have looked up to. To be with them, making decisions and to hear all of their knowledge, has been great.”

On the rugby field, Fiao’o, who played in the hooker position, has been a cornerstone of women’s and Pasifika rugby in New Zealand. She is the most decorated Auckland women’s player with 106 games and represented the region from 1999 to 2018, winning 15 national championships. She also has 57 caps for the Black Ferns and was named the team’s captain in 2012.

“I always felt at home on the rugby field,” she recalls. “I enjoyed playing alongside my friends and it gave me a sense of belonging.”

Fiao’o was born in Samoa and moved to Auckland with her parents and seven siblings when she was five years old. Her mother, Nasareta, is from Fogapoa in Savai’i, and her father is from the villages of Faleula and Aleisa in Apia.

At school, she played netball until she was 15, when she discovered her love for rugby at Aorere College in South Auckland.

“Back then, rugby wasn’t a popular sport for girls at school. I played netball and watched my brother play rugby every Saturday. But when I had the chance to play rugby, I fell in love with the game. Rugby taught me how hard to train, to set goals and have high standards, like trust and respect. Trust is a biggie. You have to trust your teammates.”

Fiao’o’s passion for rugby led her to enjoy success in club rugby and the provincial level. She also experienced the disparity between men’s and women’s rugby, and learned that she and her mates needed to work harder and make more sacrifices for the game they loved.

“Resources were very scarce. The challenging stuff that was coming through was having access to the fields. If we were to train on the same day as the guys, we wouldn’t get a full field for practice.”

Juggling work and family commitments was also challenging for the sports star. Fiao’o left high school to work in a supermarket. She wanted to help with the household bills after her father took ill and had to go on the sickness benefit. She did a stint in England playing rugby before returning to New Zealand to become a police officer.

“I was getting close to my 30s and I needed to tick off a career box, and rugby wasn’t always going to be there for me. That’s when I decided to join the police force.

“The main reason why I wanted to be a cop was because of the Police Academy movies! I enjoyed watching those comedies with my dad. But police college was definitely not like that. Joining the police force allowed me to protect the community that I live in and help to make New Zealand a safer place.”

Fiao’o first made the Black Ferns in 2002, playing in the World Cup in Spain. She says she was mostly on the bench, but the experience was still invaluable.

“I was young and scared. I had a lot of respect for my teammates. I was in awe being surrounded by these great players, and I had the opportunity to represent my family and my country.”

The very first time she started a game in the black jersey was at the 2006 Rugby World Cup in Canada. Her opponents were the team from her birthplace and a country she visits every year – Samoa.

“Two weeks prior to that game, I was with the Samoan women’s team to celebrate them qualifying for the World Cup. They were all my friends. Then I had to stand across from them, playing for New Zealand and wearing the black jersey. When I heard the Samoan national anthem being played before the game, I became really emotional and was in tears. But we all understood that everything that happens on the field stays on the field.”

She hopes her success will inspire other women to achieve in sports and in their careers.

“I love the fact that I’m a Pasifika woman working in the police force. I receive so much respect from the public.

“I work in Counties Manukau and the Pasifika population is high in South Auckland. For young girls to see a Pasifika woman walking around in a police uniform will hopefully give them that same drive.”

Fiao’o has hung up her boots and has retired from playing rugby. But she continues to be actively involved in the sport, through her new role at Auckland Rugby and also by attending the odd Auckland Blues training camp to offer her expertise.

“Our young Pasifika women are naturally talented at sport. To see one of their own holding up the World Cup will give them the belief that they can do it too.

“As much as I do it to help the young ones come through, I also love challenges and proving people wrong. There are always stereotypes out there and I want to be that woman to change things.”