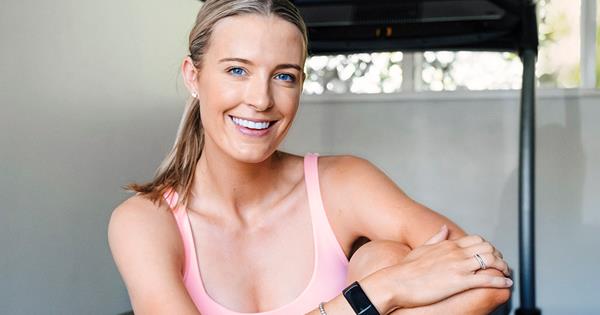 As their daughter Billie Rose marks 18 months, All Blacks hero Beauden Barrett and his wife Hannah could have a budding athlete on their hands. As Hannah tells Woman’s Day, the little girl has already adopted her famous parents’ love for keeping active.

“She’s just a runner – she runs everywhere!” grins the 27-year-old mother and influencer. “So it’s going to be interesting to see what she’s like when she’s older.”It’s hardly surprising Billie’s always on the move. With athletic genes thanks to her rugby star dad and former hockey player mum, she’s also accustomed to seeing Beauden, 30, race around the field and Hannah on her treadmill.

Although Hannah’s always been sporty – playing hockey for Auckland and Wellington through university, and spending lunch breaks at the gym once she became an accountant – she admits pregnancy presented new challenges and, like many first-time mums, she struggled with her body and fitness after welcoming Billie.

“I kept active during pregnancy with walking and low-impact Pilates, which was good mentally and it also helped being fit for the birth,” says Hannah, who shared her 2019 wedding to Beauden in the pages of Woman’s Day.

“But afterwards, I struggled quite a bit during those first three or four months while adjusting to motherhood. I didn’t get to the gym anywhere near as much as I would’ve liked, then we moved to Japan, so I wasn’t gym-ing at all.”

Hannah says walking and exploring Tokyo helped her rebuild her fitness levels. She was also conscious of not comparing herself to other new mums.

“With social media, it’s easy to look at someone’s photos and think, ‘They look amazing after having a baby.’ But often it’s angles, lighting and sucking it in! No one should compare themselves to what they see on social media.”

Talking about how age and motherhood have affected her body image, Hannah adds, “I’ve gotten more confident over the years. Being pregnant and seeing my body changing so much have made me appreciate how amazing that process is, so it was more about getting back to the fitness level I was before pregnancy.”

Like many mums, Hannah’s biggest challenge has been carving out time for exercise while parenting, running a household and working as director of skincare/supplement company Me Today, as well as doing digital marketing and content creation.

That juggle’s even trickier with Beauden often away for rugby commitments – within two weeks of Billie’s birth, he posted a photo farewelling the newborn, sweetly writing, “Don’t grow up too much
in a week, my little peach.”

“Finding time to exercise with a young baby is hard since Beauden’s away so much,” admits Hannah. “Often when I get a one-hour window where Beauden’s home or my mum’s over, I don’t feel like working out. Sometimes I’d rather put my feet up because I’m shattered!”

With their “little princess” Billie having turned one in September, Hannah started a new at-home regime just before Christmas, using the NordicTrack X32i incline trainer. The treadmill features pre-recorded workouts, live training and the ability to virtually run or exercise anywhere in the world.

Hannah says she’s now exercising more, and feeling more motivated and excited about workouts, thanks to the machine, which is available at elitefitness.co.nz.

“It’s such a luxury when you’re a mum to go to the gym, so it’s nice that I can just escape to the garage and do a workout while Billie’s sleeping. You almost don’t have to think about it because there’s pre-recorded workouts and it’s nice to do virtual escapes, like a mountain run or beach walk. I’m currently doing a 10km run series through Costa Rica!”

Hannah reveals she’s even caught Beauden and his All Black mates sneaking in sessions. “He loves it!” she grins. “The other day, I went to use it and it had sweat droplets all over from Anton Lienert-Brown, so I gave him a hard time!”

Describing herself as a “foodie”, Hannah eats healthy but doesn’t deprive herself of treats and says her workouts have served as “therapy” in these chaotic times.

“During the past year, our life’s been all over the show. My husband’s been away, and I’m working and doing mum life, so it’s been full-on, which is why I feel better when I put time into taking care of myself and doing things that make me feel good – like exercise, bubble baths or just watching Netflix.”

And although she and Beauden bonded over sports when they started dating, these days, they now spend their precious time together enjoying family fun with Billie.

Hannah’s favourite thing about parenting is simply being Billie’s “person”, she says. “If she hurts herself or before she goes to bed, I’m the one she turns to – or Beauden – and I love that.”