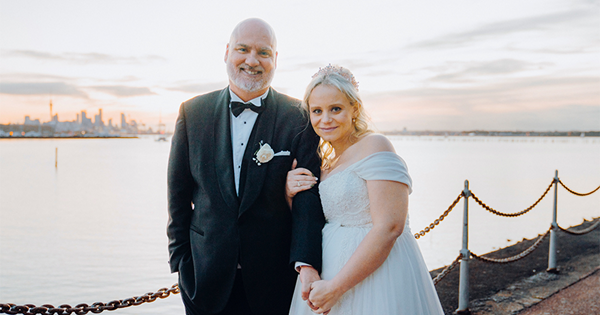 In 2020, when Troy Elliott lost his wife Tracey to breast cancer after 20 years of marriage, he was battle-weary and grieving. Finding love again was the furthest thing from his mind.

But a drive to fight for access to cancer drugs – which pushed Troy to enter local politics – has unexpectedly led him to a new romance and healing from heartbreak.

This month, the Ōrākei local board member married Manurewa member Tabetha Gorrie in a moving ceremony at Auckland’s Holy Trinity Cathedral, with their first child due in September.

“Normally when two politicians meet, it ends up in tears – yet this time it’s ended up in rings and a baby,” laughs Troy. “We got to know each other after we were both elected to our local boards and discovered we were both going through our own battles.

“Tabetha’s marriage had broken down during the same time that Tracey had passed away. As good friends, we were able to support and console each other. Neither of us believed there was any chance of love at the time.

“Me, being 22 years older than her, thought, ‘What would a young woman see in an old bugger like me?’ But then the realisation hit that it was becoming a bit more than friendship.”

Tabetha agrees, “I really admired Troy’s frankness and his political knowledge, and I was amazed by the way he handled Tracey’s passing while still advocating for cancer patients.”

They quickly became inseparable and, knowing just how short life can be, the 53-year-old decided to spontaneously propose to Tabetha, 31, under the blood moon in May last year. “It was very romantic,” she says, smiling at him.

“He presented me with his grandmother’s antique diamond engagement ring. Then we toasted with Champagne for us and lemonade for our two boys, Matthew [eight] and Joshua [five], and set about planning the wedding.”

Troy says they had no plans to have children together. However, in January, there was “shock and happiness” when he found out his fiancée was pregnant. It will be his first child.

“Early on, Tracey and I had decided we didn’t want children and I had no desire to have them at all, until I got to know Tabetha and her two monkeys,” he admits.

“I realised that I probably am a big child at heart. I absolutely loved spending time with them and consider them part of my family now. To add a new baby boy is the icing on the wedding cake!”

The pregnancy only caused one problem. When Tabetha went to her final wedding dress fitting, it didn’t cater for a seven-months-pregnant body.

“I had to race to Modes Bridal Boutique on the Saturday before the wedding,” she laughs. “There was one dress on the shelf that fit perfectly and obviously was meant to be.”

“And she looked spectacular on the day!” adds Troy, revealing he was a bundle of nerves beforehand. “Reverend Anne Mills calmed me down, but I still had tears flowing as Tabetha walked down the aisle.”

The lovebirds said their funny and personal vows – Troy promised to fold the towels properly “because I’m bloody useless” – in the beautiful Bishop Selwyn Chapel at the back of the cathedral.

Both Tabetha’s boys loved being included in the wedding as well, with Joshua being the ring bearer and Matthew performing a reading, before the newlyweds danced out of the church to the Harry Styles hit Watermelon Sugar.

“It enabled us to laugh and smile at the end of a big service full of emotion,” explains Troy, whose 83-year-old father, former MP John Elliott, was gravely ill and unable to attend the service. Sadly, John passed away 10 days after the wedding, but the couple plan to name their new son Jonathan in honour of his memory.

Both John and Tracey were mentioned during the emotional speeches – MC’d by Auckland councillor Desley Simpson, before Tabetha and Troy enjoyed their first dance to Clinton Kane’s I Guess I’m In Love.

“We chose it simply based on the lyrics, which really match our feelings for each other,” tells Troy. “The words say, ‘You’re everything that I want, but I didn’t think I’d find… Someone who is worth the wait of all the years of my heartbreak. With you, I see hope again.'”

When we chat to the happy lovebirds, they are fresh from their honeymoon/babymoon in Fiji. Asked if they talked politics at all on their holiday, they don’t hesitate in replying wryly, “Ah, we didn’t talk about anything else!”

Troy adds, “To us, work is 24-7. We enjoy bouncing around policy ideas together and planning them out in preparation for the busy months ahead with the campaign period starting. My political career has been one of the lowest-paying roles I’ve had since I was 20 years old, but the most rewarding – I feel like I’m achieving something.”

Although his late father never doubted his son would end up in politics, for Troy, the realisation slowly crept up on him when he began battling to make cancer treatment more accessible.

When his first wife Tracey was diagnosed with stage 4 breast cancer in 2014, she was told she only had two weeks to live.

But in fact, “the true warrior” lived for another six years, thanks to the couple selling their house so Tracey could afford cancer drug Kadcyla, which cost almost $9000 every three weeks.

“We were forced to do that because, like so many New Zealanders, we weren’t able to pay for these drugs that were phenomenally out of everybody’s reach,” says Troy. “But, of course, we would have done anything as Tracey battled so strongly to live. We agreed to start on Kadcyla, which was already fully funded in the UK and Australia.”

Troy says the drug halved Tracey’s cancer count and significantly reduced the size of her tumour.

“Together we fought and advocated for two different drugs over time – Kadcyla for HER-2 positive metastatic breast cancer and Alecensa for positive advanced non-small cell lung cancer, which both were made publicly available, thankfully, and extended Tracey’s life.

“She was unusual in that she never thought she was actually going to die,” says Troy. “Even when the rest of us knew the end was near, she was planning how she was going to come home from being in care at a retirement village.”

Tracey died on 31 October 2020 – the last day of Breast Cancer Awareness month. Troy was out collecting for the Breast Cancer Foundation when he got a call to say she had passed.

“Life as I knew it stopped,” he says. “I had been through six and a half years of caring and fighting for Tracey, but I knew I would continue with cancer advocacy until the day I take my last breath.”