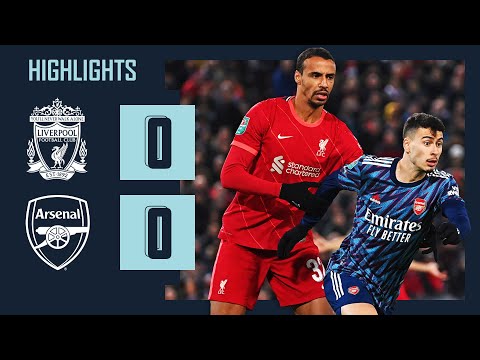 We delivered a display of incredible heart and character to secure a goalless draw in the first leg of our Carabao Cup semi-final with Liverpool despite playing with 10 men for more than 67 minutes at Anfield.

With Granit Xhaka sent off midway through the first half for a tackle on Diogo Jota, we stood firm, dug in and showed a steely resolve to frustrate the home side.

Such a performance delighted Mikel Arteta and his staff, and means it will be winner-takes-all in the second leg at Emirates Stadium next week.

With Martin Odegaard, Emile Smith Rowe and Takehiro Tomiyasu all ruled out of this match, numbers were tight and we had to name a young bench.

The hosts, who were almost at full strength apart from those away on Africa Cup of Nations duty, made a fast start and Aaron Ramsdale had to be alert to deal with a teasing Andy Robertson cross.

We soon lost Cedric to injury to further disrupt Arteta’s plans, and not long afterwards Roberto Firmino looked certain to score when he met another cross from the left only for Ben White to clear off the line.

We were up against it, and the task suddenly became even greater when Xhaka was sent off for taking out Diogo Jota as the last man in the 23rd minute.

Arteta reacted immediately by taking off Eddie Nketiah and bringing on Rob Holding and switching to a back three in an effort to stifle the home attack, and it had the desired effect for the rest of the first half.

Immediately after the restart, Takumi Minamino came close with a cross that nearly flew into the top corner as the hosts laid siege to our goal.

But for all their dominance, we stood firm – getting men behind the ball, defending as though our lives depended on it and, led by the superb Bukayo Saka, proving a threat on the break.

Anfield was getting increasingly restless as we entered the final 20 minutes, and with Arteta and his staff willing the team on animatedly from the touchline, we were growing in confidence.

We then carved out a big chance as Kieran Tierney rampaged forward, and his cross was touched on by Saka in the area before taking a shot that Alisson saved.

It was tight and tense, but in the last minute Liverpool were presented with a huge chance when Ramsdale’s punch came to Minamino in the box, but with an open goal he flashed his shot over the bar.

Despite some late pressure, we stood firm to hold out for what felt like a huge draw considering the circumstances. What a display of character.