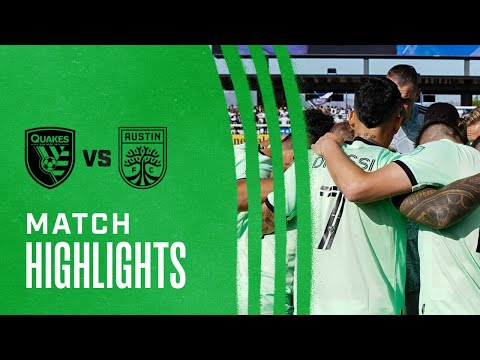 A fantastic long-range strike from Maxi Urruti and a Sebastián Driussi penalty kick spurred Austin FC to a 2-2 away draw with the San Jose Earthquakes on Saturday evening at PayPal Park.

Urruti’s first goal in Verde & Black came in the 11th minute, and it was one to remember. The striker took an excellent touch to bring down a long ball from Julio Cascante and unleashed a volley from 25 yards out that looped over Earthquakes goalkeeper JT Marcinkowski.

The second goal did arrive shortly after the break, when Daniel Pereira won a penalty for being brought down by San Jose’s Jackson Yueill. Sebastián Driussi confidently dispatched the spot kick for his fourth goal of the campaign.

The Earthquakes then pulled themselves back into the contest with a pair of goals two minutes apart. San Jose got a penalty of its own which Jeremy Ebobisse put away, and Cade Cowell scored from a scramble in the six-yard area to tie the match in the 72nd minute.

Despite late chances for both sides, neither found the net again, and the teams split the points on the night.