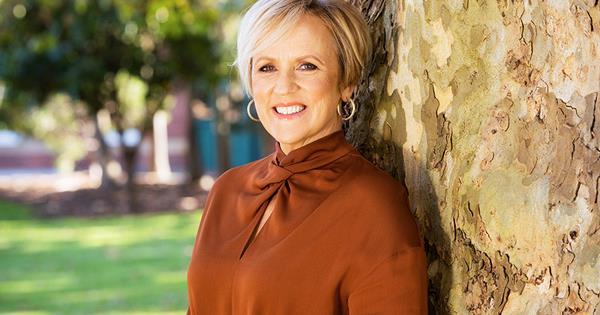 Before Hilary Barry got her job reading TV3’s news at 6pm, when she was still a young mum at home with two small boys, there was a regular weekday routine that helped her cope.

“Every night after the kids were bathed, fed and in bed, I’d sit down and have half an hour watching Shortland Street to unwind and decompress,” she recalls. “It really kept me company and helped keep me sane when my kids were little.”

Years later, when she moved to TVNZ to present Seven Sharp, Hilary kept hoping there might be a chance for her to appear in a cameo role on the long-running Kiwi soap.

“I was thinking perhaps of lying on a gurney being attended to by a handsome doctor, a stethoscope on the chest, anything. But it never happened,” she says.

This year, as Shortland Street celebrates its landmark 30th anniversary, Hilary was at last approached to appear on the show. Totally thrilled, she jumped at the chance.

“It was an absolute dream come true,” she enthuses.

Rather than the tiny cameo she had imagined, what the writers had in mind was something meatier. Hilary stars in two episodes of the show, which screened this week (Monday May 23 and Tuesday May 24) on TVNZ 2. And the character she plays isn’t too much of a stretch for the broadcaster, who will star as herself, shooting a documentary series on the state of healthcare in New Zealand.

She admits when she saw the scripts, with pages and pages of dialogue, she panicked.

“I went from being excited to an overwhelming doubt that I could learn all those lines,” tells Hilary. “I thought, ‘I’m not an actor. I don’t know what I’m doing.’

“But then I gave myself a talking to, like you have to when you’re faced with something that you think you’re really not up to. I said, ‘No, you can do this. Be a big girl!’

“I spent a lot of time learning the lines. Then I went and joined the team on Shortland Street and had an absolute blast.”

Playing herself felt slightly weird, especially since the fictional version of Hilary Barry is an even straighter-talker than the real-life one.

“There were times when the director would call ‘Cut!’ after we’d done some lines of dialogue and I’d burst out laughing, and say, ‘Hilary Barry wouldn’t be so mean.’

“One moment in particular, I had to deliver a very catty line to Chris Warner, implying he only got his job at the clinic because his dad was one of the original financers – and no, I’m sorry, Hilary Barry would never be so unkind.”

On the whole, though, the Shorty scriptwriters did a great job of capturing her and it all felt quite natural.

“Honestly, I arrived there feeling so out of my depth and starstruck, but they couldn’t have been kinder, and it was a great experience.”

For Hilary, 52, this is a stage of life for great experiences. Her sons have left home – Finn, 22, and Ned, 20, are both away at university – and she is no longer working at both ends of the day like she did during her years of juggling jobs in radio and TV.

She is relishing the freedom to try new things, and next month will be appearing in another series of comedy charades show Give Us a Clue alongside fellow team captain Tom Sainsbury and host Paula Bennett.

While Hilary loves performing and is always open to saying yes to new things, she finds being out of her comfort zone as daunting as anyone else.

“I’m a pretty confident person,” she admits. “I was a little girl who enjoyed singing and being on stage at school, and being part of the debating team. I was into everything. But I’ll still have times of crippling self-doubt like I did with Shortland Street.

“It’ll hit me when I least expect it, and I’ll literally talk to myself out loud, saying, ‘Come on, for goodness’ sake, you can do this.'”

What Shortland Street and Give Us a Clue have in common is they both involved Hilary putting herself out there.

“I’m aware that potentially I might look really stupid,” she says. “But what’s the point of life if you’re not going to give things a go? If people think I’m an absolute dick, oh, well, I’ve had a laugh!”

Hilary is famously and fearlessly outspoken, and probably always has been.

“Behind the scenes, I’ve never been afraid to stand up for myself,” she tells. “But I think what age has given me is the confidence to be more open about it. I’m more public about being lippy and stroppy. I call it like it is.”

She also has a reputation for being a “clapback queen”, hitting back at haters on social media. Actually, says Hilary, she does that rarely and usually only as a way of highlighting issues that lots of women face, such as when she gets negative comments about her body and appearance.

Recently, she has been vocal in support of celebrity chef and entrepreneur Nadia Lim after comments made by a businessman made her blood boil (DGL boss Simon Henry insultingly referred to Nadia as “a little bit of Eurasian fluff”). In response, Hilary came up with #flufffriday, a play on her well-known #formalfriday.

“I thought it was a way that women and some men on social media could perhaps help her feel not so alone in the moment,” she explains.

Inevitably, if you stand up for yourself and other people, you are going to get criticised for it. Hilary is okay with that.

“I’m very thick-skinned,” she asserts. “I’ve come to realise that the opinions of strangers don’t matter. Again, I think that’s something that comes with age.

“If I’m honest, there’s probably only a few people in my life whose opinion I really care about. It’s important to focus on that whether you’re me or someone else who’s facing scrutiny or criticism. Do I care about this person? No, I don’t and they don’t have the right to make me have a bad day. I learned early on working in television that some people don’t like you for no reason at all.”

She has also been vocal about being pro-vax and is happy to share her experience of going through the menopause transition although, fingers crossed, she appears to be over the roughest part of that.

“My doctor certainly thinks so, but I’m a bit wary of saying it because there are so many unknowns,” she tells. “Suddenly you can wake up one day and discover you’re not through it at all.”

While she had the common symptoms of hot flushes and night sweats, for Hilary the worst part was the aching joints. “There were times I had terrible pain in my toes and knuckles. I couldn’t even manage the twisting motion to open the lid of a jar. It was ridiculous.”

In the early stages, she also experienced break outs of pimples. “I’d go into the make-up room at work and the lovely team would ask if I might be allergic to something. But then I realised no, it was just acne brought on by menopause.”

While this may have been a fairly busy year so far, generally Hilary is enjoying the chance to slow down. There are times, she insists, when she doesn’t achieve very much at all.

“I look back at when I was doing two jobs and how much I fitted into a day. I enjoyed both those jobs, but I was working crazy hours. Now I go for a walk in the morning, pop down to my local café and get a coffee, tutu around, honestly, I just squander time.”

She and her husband Mike are finding midlife to be an enjoyable stage of life. They miss the kids terribly, but appreciate being able to do whatever they want on the weekends. And Hilary says she is at a stage in her career where she feels confident about what she is doing and enjoys it.

“I never realised how wonderful your fifties can be,” she smiles. “It’s absolutely glorious.”