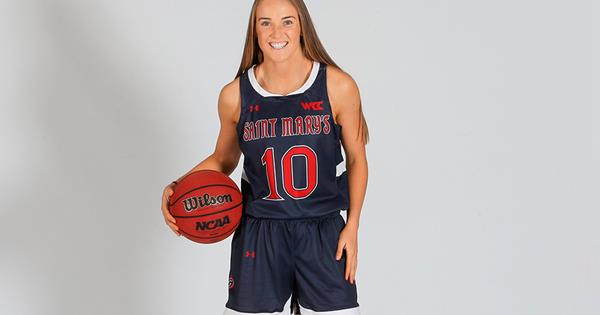 It’s been five years since Silver Fern legend Tania Dalton unexpectedly died from a brain aneyuresm. But her legacy still lives on in her 20-year-old daughter Tayla, who is following in her talented mum’s footsteps both on and off the court.

“Not a day goes by that I don’t think of Mum, but she wanted me to do what I love and chase my dreams – and that’s exactly what I’m doing,” says Tayla.

The young Kiwi lives in San Francisco, where she is playing division-one basketball and studying for a business degree on a scholarship at St Mary’s College. It’s a busy life – two basketball games and at least 20 hours of physical training per week, plus her classes and studying. But Tayla is copying Tania’s example and cramming life full of the things and people she loves.

“I’m getting the best of both worlds,” she asserts. “I’m able to study something I’m really passionate about and I get to travel while playing the sport I love at such a high level too.”

Her mum was a sharp shooter on the netball court and a commentator on Sky TV, but Tania was also renowned for her love of helping others. It’s a value she and husband Duane instilled in Tayla and her brothers Charlie and Matthew.

“I want to help as many people as I can,” says Tayla, who is an integral part of the Tania Dalton Foundation. The foundation provides financial scholarships, mentoring and workshops to 12 young female athletes each year.

“Dad’s a bit of a legend, he came up with the idea with some friends almost straight after Mum passed away. She always believed you gain more from giving than receiving,” says Tayla, who is a board member. “Helping these girls is a way we still feel connected to Mum.”

As she talks, it’s clear how passionate Tayla is, but she shares the last five years have also been incredibly difficult. The last thing Tayla said to her mum was, “I love you” as the athletic 45-year-old left home to play a social game of touch rugby on February 23, 2017. During the match, Tania collapsed and five days later her family made the difficult decision to turn off life support.

The months after Tania’s death were a whirlwind. Tayla recalls being shocked by the number of people at the funeral, which was held at North Harbour Stadium in Auckland.

“There wasn’t a single space free. I think more than 5000 people came and there was a live stream with 80,000 viewers. But it’s not about numbers or popularity, she’d touched everyone in that room in some way,” says Tayla, who bravely spoke at the service.

“It’s one of the hardest things I’ve ever done, but it’s also one of my proudest moments. I’ll be forever grateful I had the chance to say my final words.”

In the wake of her mother’s death, Tayla has seen how much Tania inspired and impacted others.

“I always knew she was a legend, but I never realised how much more she was than a mum. She was a world champion sports star, a Kiwi icon, a vital part of starting Pita Pit in New Zealand and was raising three kids. She meant so much to so many and she was never too big for anyone.”

Thinking back to her earlier years, Tayla shares how much she misses spending time together. “I miss the netball trainings when she coached me, and I got to see her talents and how smart she was,” says Tayla. “And I really miss hearing her opinions, but I’m so grateful to have Dad. They had an incredible relationship and shared the same values, so I still get those.”

Tayla also feels blessed to have the support of her godmother Bernice Mene and so many of Tania’s friends and netball teammates, who rallied around them after the devastating loss.

“We were never left alone and I still have some of the most amazing people mentoring me.”

Speaking with a confidence beyond her years, Tayla laughs, saying it’s something Tania used to joke about.

“Mum would always say, ‘Tayla was given to me for a reason’ and joke that I was more responsible than her.”

So much has changed in the last five years and Tayla constantly wonders what her mum would think, but the inspirational student is confident Tania would be proud.

“She would never want us putting our lives on hold, so I know she’d be so happy to see we’re still smiling and living awesome lives, ” says Tayla.

“Mum had such an amazing life and achieved so much. She lived more in 45 short years than most people do in 90 years.”