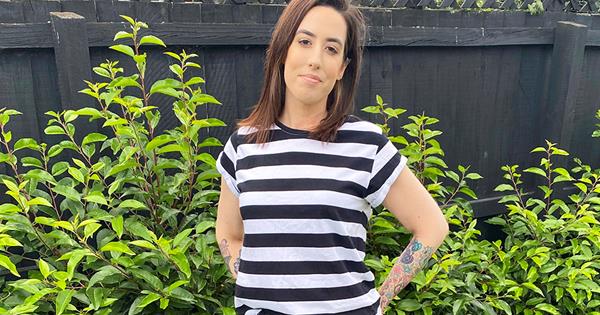 Despite dropping half her bodyweight, Christchurch
mum Katie shares why she still won’t wear a bikini

When Katie Jones uploaded photos of her 30th birthday to Facebook, she captioned the images “Thirty, flirty and thriving”, yet behind her big smile, she was hiding a deadly secret from those she loved most.

Back in August 2020, the Christchurch mum was in the battle of her life with an eating disorder and no one, not even her husband Gary, knew the dark depths her illness was taking her to.

Katie’s struggle with food started when she was just five years old, but it was in her late teens that she began yo-yo dieting, bouncing from hardcore exercise and starvation, to binge eating and back again.

After the birth of her two sons, Weston, now five, and Theo, four, she ballooned to 126kg – her heaviest weight ever. “I was so ashamed of myself,” Katie, 31, confesses to Woman’s Day.

Her binge-eating disorder – only formally recognised as a mental disorder in 2013 – saw her making multiple daily trips to McDonald’s, hiding food wrappers in her baby’s dirty nappies and eating her kids’ lunchbox snacks.

“When I’d host a mother’s group at my house, everyone would bring a dish and I’d finish off the scraps on people’s plates when they left,” admits Katie, who realised she had to reach out for help just weeks after emerging from her 30th birthday sugar coma.

“Clothes didn’t fit, I was scared to sit in a chair in case I broke it, I developed severe sleep apnoea and I couldn’t run around after my kids. I knew this illness was going to kill me. I was eating myself
to death.”

Finally admitting what was going on, Katie told her husband Gary she needed gastric sleeve surgery, where a portion of the stomach is removed to help a person feel full after eating just a small amount.

“I said to him, ‘If I was dying from anorexia, you wouldn’t hesitate to put me in the hospital – what I’m going through right now is the same, just at the opposite end of the spectrum,” recalls Katie, who had her life-changing operation in November 2020.

“Some people have the view that surgery is the easy way out, but it’s not. The surgery doesn’t stop me from putting anything in my mouth – I had to make that choice every day. I had to prioritise exercising and eating well.”

Instead of cutting out food groups, Katie has learnt to fall back in love with eating, finding joy in cooking and recreating recipes from TikTok. She’s also embraced exercise, regularly lifting weights, going for power walks and “dancing around the house like nobody’s watching”, she grins.

Now, just over a year on, Katie is 62kg – half of her original weight – and while she’s incredibly proud of her achievements, there has been a downside.

“I try to tell myself every day, ‘My body is healthy. My body is strong. I have two working arms and two working legs,’ but being so overweight and losing so many kilos, you end up with loose skin – and I have a lot of that.”

“It’s not the end of the world and it’s not all about looks, but I want to love my body. I’m so close, but I’m hidden in this sack of skin. I can fit into a bathing suit, but I don’t want to wear it because I feel really self-conscious.”

Katie hopes to have one final operation to remove the loose skin from her arms, thighs and stomach, but with the procedure costing upwards of $20,000, money is a hurdle. However, one of her many Instagram followers – she’s documented her weight-loss journey on @Katie.Gets.Sleeeved – came up with the idea of crowd-funding the surgery via Givealittle.

“I wasn’t sure about it at first, but then I thought, ‘Why not?’ I was always raised to believe that if you don’t ask for what you want, you don’t get it,” shrugs Katie, adding that she and her family are doing their best to save the money themselves.

In the meantime, she’ll continue to share her recovery and wants people to know that her DMs are always open. “As cheesy as it sounds, I want to make a difference in the world by using my experiences to bring awareness to mental health and eating disorders.

“I want people to remember there’s more than what you see on the surface. People are battling things that go far deeper than what they appear as on the outside, so reach out if you need help.”

A HELPING HAND
If you want to help Katie continue her journey, head to her givealittle page. For help with an eating disorder, visit ED.org.nz or phone 0800 EDANZ.