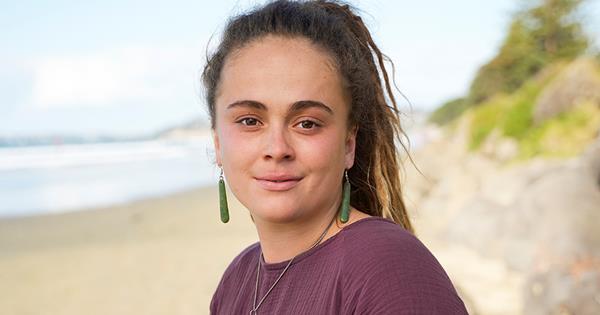 Life for most 21-year-olds is a whirlwind of parties and new adventures. But Gabrielle Martin is not your average 21-year-old. She has just taken a year out of her life to care for her 68-year-old best mate Bob (or Bobba as she called him), who was dying.

Gabrielle grew up next door to Bob on Auckland’s Hibiscus Coast and over the years, the pair formed a tight bond.

“Whenever Mum couldn’t find me, she knew I’d be at Bobba’s,” Gabrielle laughs. “One of my earliest memories is of standing on his feet to mow his lawns with him when I was four. He taught me to fish, how to change a tyre, ride a bike and drive. He was my person.”

Four years ago, Bob, who lived alone, was diagnosed with prostate cancer and Gabrielle was devastated. “About three years into his cancer journey, I came home from travelling Europe. I’d been away a couple of years, working as a barista and a surfing teacher, and originally intended just to stay three months. But every time I visited him, I noticed small declines becoming bigger. I just couldn’t go back.

“I didn’t really have work to go back to, so I made this decision to move in with him and look after him 24/7. Bobba was a proud man and he wanted to die at home. He had always given me so much, so this was the least I could do for him.”

Not all of Gabrielle’s friends understood her decision, but those who “knew and loved Bobba did – and my family was very proud”.

With the blessing of Bob’s family, who spent as much time as they could with Bob but were unable to care for him full-time, Gabrielle set about preparing herself for the journey, starting by bulking up at the gym.

“I’m five foot five and he was six foot four, and I needed to be able to lift him and catch him if he fell,” she explains.

Then she learned everything she needed to know about administering Bob’s medications and managing his pain levels from Harbour Hospice nurses, who had already been regularly visiting.

“Without the nurses,I couldn’t have done it,” insists Gabrielle. “They gave me the confidence to care for Bobba and also the strength – because it was scary at times and it was emotionally challenging. It was like stepping into this world that was often intense and dark, but also beautiful, and all the way the nurses were there to guide us.

“Whatever equipment or meds we needed, they made sure we had them. Whenever I needed advice, I could call them, and I called every day!

“And what I loved was that cancer was never the elephant in the room. They didn’t avoid the fact that Bob was dying – they would talk to him about it and that gave him comfort.”

Some nights, Bob would wake in terrible pain. Other nights, he’d just fancy a 4.30am coffee and eggs.

“Whatever he wanted and whatever time it was, I’d make it for him because any of those meals could have been his last,” says Gabrielle.

The pair often talked about life and death, and even though these conversations were painful for Gabrielle, she understood why they needed to have them.

“I would tell Bobba how beautiful he was and that I was sorry he had to go through this, because no person should have to, especially not a man like him.”

Harbour Hospice’s massage therapist taught Gabrielle how to give soothing foot massages and Gabby massaged his feet every day. “But then he’d say, ‘Come on, give me your feet now,’ and I’d say, ‘Bobba, this is not the point of this,’ but he’d insist anyway.”

In Bob’s final days, he became less aware of his surroundings and the pair slept very little.

“I was so tired, but there was no place else I’d rather be,” Gabrielle says. “I’d just call the nurses – any hour – and have a vent and then I’d be able to carry on again.”

Bobba took his last breath on March 3 with his daughter on one side and Gabrielle on the other, holding his hands.

Gabrielle recalls, “I was an absolute mess and I feel like I’m still in shock. My nana was also dying, so I went straight from Bobba’s to help care for my sister while my mum and aunt looked after Nana, with hospice support.”

Gabrielle’s nana died 11 days later and she says the two losses have left “huge holes” in her heart, but also inspired her to become a nurse. “I do like nurturing people, but right now I’m out of whack and need to learn to look after myself again.

“I feel like a different person and I will never be the same again. But I’d do it all again, 100 times over, and my advice for anyone else is that it’s hard but it’s worth it. I got to share all of those incredible moments with Bobba.

“The other day, my sister and I were in Mum’s kitchen talking about Bobba when a feather flew in the window and landed right in front of us on the bench. I looked at it, and my sister looked at me, and she said, ‘Hey, Bob.’ I’ve kept that feather.”

Hospice relies on the generous support of its local communities to continue to deliver its life-changing service.

The charity cares for people in any place they call home, whether it’s in the community, in a patient’s home or at its purpose-built facilities. And hospice care is not just given in the last days of someone’s life. The earlier hospice can get involved in a person’s care, the more they can do to support them and their whānau, to live every moment.

To donate, go to harbourhospice.org.nz/donate/awareness-week/

Did you know?
• Care is given free of charge to anyone in the community who needs it
• Hospice cares for more than just a person’s medical needs.

Patients and whānau may also have access to:
• Counsellors
• Social workers
• Cultural and spiritual support
• Physiotherapists and massage therapists
• Grief, loss and bereavement groups for carers and family.