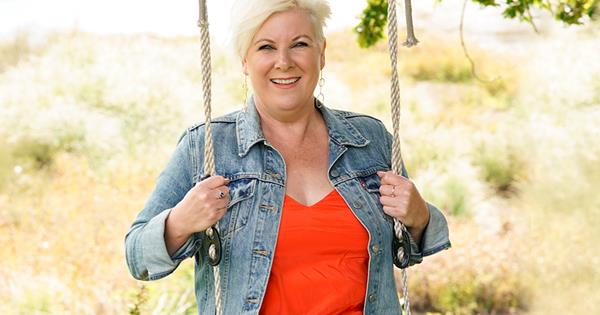 The radio diva opens up about her blossoming relationship, why their age gap doesn’t matter and her divorce from Dom

While most Aucklanders were counting the hours until lockdown ended, Jay-Jay, 47, confesses to Woman’s Day that she was living her best life in her city apartment with her new man, 27, who she met at a friend’s dinner party.

“I told Flynny he was my flatmate,” she laughs. “That’s true because he moved in on the first day of lockdown and hasn’t left! Flynny kept suggesting there’s more to it, so yes, he’s my boyfriend. It’s early days, but we just love hanging out together.”
The radio diva’s new beau already has the tick of approval from three important people in her life – her mum, her ex Dominic Harvey and their pup Kanye. Jay-Jay smiles, “He and Kanye are already besties, and Kanye normally doesn’t warm to people easily.”
The besotted broadcaster has been single since 2020, when she ended her relationship with Algerian accountant Minou, 28. “Long distance, not age, made it impossible,” she explains. “We don’t keep in touch any more.”

Soon after their split, Flynny suggested she try a dating app. “He wrote a joke profile that said I drank a bottle of wine a day and snored! I tried Bumble for a month, but I didn’t find anyone who appealed – so many bearded men holding fish, a taxidermist with a foot fetish… I deleted my profile and vowed not to go there again.”

Jay-Jay almost didn’t attend the dinner her friend arranged as she was tired. “I didn’t expect to find romance there. We just clicked. He makes me laugh.”

And the relationship blossomed over lockdown, with Jay-Jay even kicking her expensive UberEats habit to cook for her new man every night. “I’ve put a few kilos on him, but they suit him. I put weight on too, which stresses me, but he doesn’t seem to mind. He obviously likes me for my personality!”

Jay-Jay has been slow to “out him” to the world, wary of comments on the age gap.

“People can be so bloody judgemental, like it’s taboo for a woman to date a younger man,” she sighs. “With Minou, I copped flak online with people speculating he was after my money or fame. But we’re two people having a great time together.

“It’s who you click with, rather than age. A man in his late twenties can be more mature than an older man. I hate the word ‘cougar’ – it suggests a predator going after young boys, which I don’t do!”

However, Jay-Jay admits there are advantages to younger men, saying, “They’re fun, more spontaneous and more energetic. The only time our age difference comes up is if I reference a song from the ’80s and he’s like, ‘Who?'”

Last year was a time of moving on from the past for Jay-Jay, who sold the Westmere home she shared with Dom for 17 years.

“I was emotional seeing it for the last time,” she says, her eyes welling with tears. “So many memories there. I loved that house. It was huge. We thought we’d fill all the bedrooms with children. That didn’t happen.”

The star has always been candid about her and Dom’s eight-year battle with infertility. Five unsuccessful rounds of IVF and four failed attempts at artificial insemination with donor sperm ended in heartbreak and depression. Eventually, it took its toll on their relationship.

“But we’re still very close,” she shares. “His mum spent Christmas with me and my family as Dom was still in MIQ after his trip to Europe. We’re actually still married because we haven’t got round to the paperwork. If one of us wanted to get married, we would divorce, but Dom will always have my back and I have his. It’s great he gets on well with my new man – he’s happy for me.”

Jay-Jay didn’t make any New Year’s resolutions apart from keeping her popular More FM drive show’s ratings high. She’s also working on a podcast about Aotearoa’s methamphetamine crisis after revealing to Woman’s Day last year her heartbreak of knowing an addict. “I’ll be putting energy into that again this year,” she tells. “It’s such a huge problem, but every little thing can make a difference.”

Despite ongoing uncertainty due to the pandemic, Jay-Jay feels positive about 2022.

“Last year, it wasn’t just COVID causing waves, but the negativity on social media too. I feel that this year will be more balanced.”

And she has the same tentative excitement about her new relationship. “I don’t want to label it, but who knows what the future holds?” smiles Jay-Jay. “Right now, we’re having lots of fun. We’re happy. I’m happy. Really happy.”