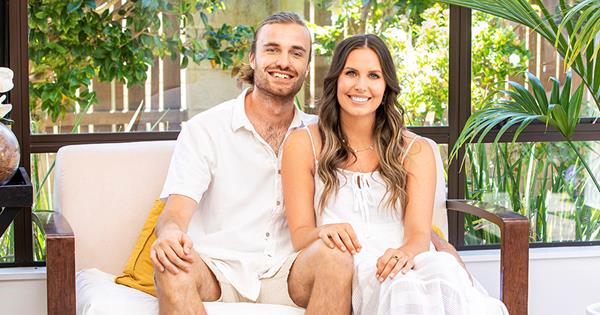 It’s no secret Jayden King’s dulcet tones have helped him find success on the airwaves, where he entertains listeners with his banter on The Edge‘s drive show alongside Sharyn Casey. But his soothing vocals haven’t just scored Jayden his dream career – they won him a girlfriend too!

Six years ago, before he became a star, Jamie was out drinking in Auckland when he approached a mutual friend, Grace Cobb, who was struck by his “nice, deep voice”. She recalls, “The first thing I said was, ‘You’ve got a voice for radio,’ then he was like, ‘You’ve got a face for TV!'”

A few weeks later, they crossed paths again at a club and although neither of them was looking for love, Jayden, 25, recalls, “She started dancing with me, then we hooked up and hung out every day for
a month. But I was firmly in the friend zone.”

“He was just a bit full-on!” explains Grace, 24, who’d never had a boyfriend and was preparing to move to Wellington to study tourism. Nevertheless, after bonding over their love of chip sandwiches on a picnic date, the pair kissed under the stars at the Rhythm & Vines music festival – and Jayden finally escaped the friend zone!

Grace’s “fun and selfless” nature caused him to pursue a romance, explains Jayden. “She’ll sacrifice her own fun to make sure everyone else is having a good time. And look at those bloody eyes – she’s the most beautiful girl I’ve met! Plus, I can be myself around her without her going, ‘Whoa, chill out!'”

Grace’s move to Wellington meant the pair were in a long-distance relationship while trust was still being established, which was challenging, admits Jayden, but after lots of visits and FaceTime chats, he eventually shifted to the capital too.

“He wanted to study, but he didn’t know what, so I suggested radio,” says Grace. “He was wasted working in a café.”

Shortly afterwards, Jayden joined the crew at The Rock, before winning The Edge’s Quit Your Day Job competition, becoming co-host of the drive show alongside Sharyn. Grace couldn’t have been more proud, but she adds that the gig presented new relationship hurdles – being discussed on air was a bit of a shock.

“I didn’t expect I’d be talked about,” confides Grace. “One day, he said something too personal that I didn’t want the whole world to know. I had to tell him I didn’t want that stuff being shared and he understood. We’ve set boundaries and now he’ll text to ask if it’s OK to mention something.”

The couple moved in together in Auckland a year ago, with DIY-loving Grace joking she’s “man of the house”. Proudly showing off a picture of a steak he recently barbecued, Jayden insists, “But I’m better in the kitchen.”

However, domestic duties aside, he confesses, “Gracie’s made me a better man. She’s shown me how to love, and that there’s more to life than hanging with the boys and pulling chicks. I was a D-bag when we met – dropping out of uni, never showing up and not paying rent. She sorted me out!”

In return, Jayden has brought Grace out of her shell, boosted her confidence and taught her not to dwell on negativity. She smiles, “Jayden is the one person who can cheer me up on a bad day, like when I had to cancel my Europe trip because of COVID. He gives the best advice, lifts me up and always makes me laugh.”

The couple hope to travel extensively once the pandemic allows, but they warn us not to expect a grand overseas engagement while they’re away. “We’ve talked about marriage and we’re obviously each other’s people, but we’re still really young,” says Grace.

Nodding, Jayden adds, “People ask, ‘When are you gonna pop the question?’ and I say, ‘It’s gonna happen, but we aren’t keen yet.’ It grinds my gears when they reply, ‘That’s just you – Gracie’s probably ready.’ I’m like, ‘She’s not!’ We’re so open with each other and know what we want.”

As for starting a family, Grace admits she’d eventually like children, while Jayden isn’t so sure, although he admits, “I suck at looking at the future.”

Now pursuing voiceover and TV work, as well as enjoying his third year at The Edge, Jayden continues, “All I know is that I’ve got work tomorrow, but this weekend? No idea. I never look too far forward, yet when Grace and I started going out, I remember thinking, ‘This is awesome. I’d like this to be long-term.’ I couldn’t imagine not waking up next to her.”