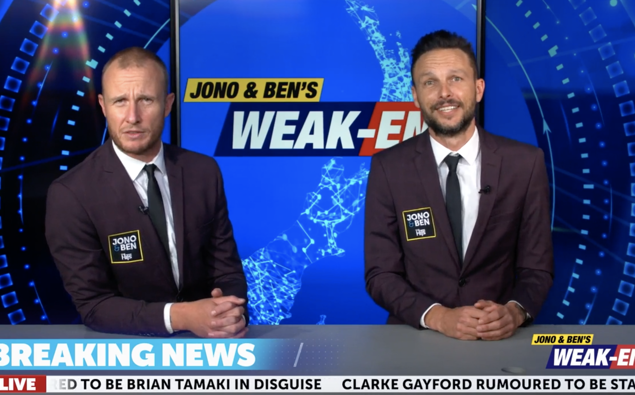 Jono and Ben are back to look at the funniest clips from the week in more hard-hitting news, well more likely a light spanking!

This week the Prime Minister Jacinda Ardern was up early for a breakfast grilling on AM with Ryan Bridge. Ryan was keen to talk the price of living while Jacinda seemed keener to repeat Ryan’s name over and over again. But it was Clarke’s name that Jono is constantly repeating in this week’s bulletin.

In Rotorua, a Liquor store owner caused a nun-chucking nightmare for a thief and Australian birds were chucking other things on interpreters in outdoor press conferences.

In the American Wheel of Fortune game show, the contestants struggled to figure out a popular phrase, which left Jono and Ben with no idea either.

It’s all in this week’s Weak-End or as Rihanna would sing, “Cheer’s to the Freakin’ Weekend”.