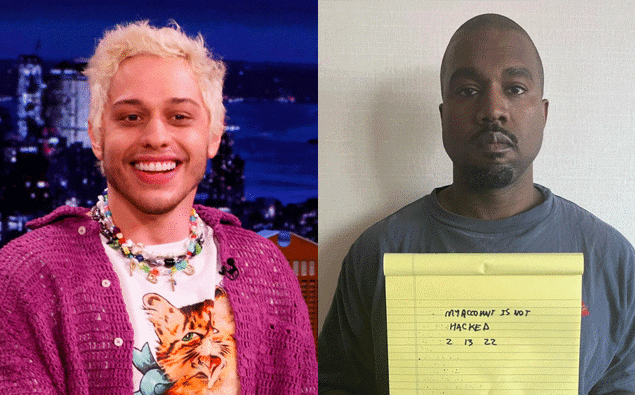 Kanye West has taken to Instagram in a bizarre rant against his estranged wife’s new boyfriend Pete Davidson.

He called the Saturday Night Live star a “d***head” and shared a screenshot of Davidson’s private text to him, reports the Daily Mail.

The 28-year-old comedian had texted the rapper: “I’d never get in the way of your children. That’s a promise. How you guys go about raising your kids is your business and not mine. I do hope [some] day I can meet them and we can all be friends.”

Kanye shared a pants-less snap of Davidson with Machine Gun Kelly, writing: “No you will never meet my children.”

He also posted saying he had “no comment” on a rumour that Ariana Grande had ended her engagement to Davidson for allegedly sending intimate photos of the pair to her ex Mac Miller before his death in 2018.

And the rapper seemed particularly outraged that Davidson, who is in the process of laser removing his tattoos, once had his “hero” Hillary Clinton inked on his calf.

“When I tag people I’m just putting together the web. There are a group of people who run media and the election. Thank god for free speech,” Kanye claimed.

“Look at this d***head. I wonder if Instagram gonna shut down my page for dissing [Hillary] Clinton’s ex-boyfriend.”

West added that: “Y’all seen that tattoo but if I speak up then I’m crazy. I told you not going to use that one no more when a garbage man goes to work he gonna smell like trash but it’s time to take the trash out the house … You can Google the Hillary thing I’m not making this s*** up.”