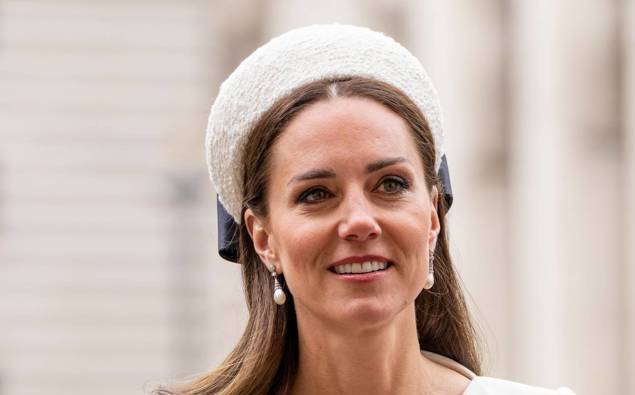 The Duchess of Cambridge has made a last-minute appearance to commemorate New Zealand and Australia’s war dead.

Prince William attended The Cenotaph war memorial in London earlier in the day where he laid a wreath of poppies on behalf of his grandmother, Queen Elizabeth.

He was later joined by the Duchess at Westminster Abbey for the Anzac Day Service of Commemoration and Thanksgiving. The Duchess was not expected to appear, but it was announced she would attend just prior to the service which included guests Australian High Commissioner George Brandis and UK Prime Minister Boris Johnson.

The Duchess recycled a white Alexander McQueen coat dress which she wore in 2015 at her daughter, Prince Charlotte’s christening. The coat was styled with Princess Diana’s Collingwood earrings, a halo headpiece and black accessories.

The Duchess last attended a service of Thanksgiving in March to celebrate the life of Prince Philip, Duke of Edinburgh.

The Duke and Duchess’ latest appearance comes one week after the couple led the royal family into the traditional Easter Sunday service at Windsor Castle – without the Queen.

The pair stepped out along with their two oldest children Prince George and Princess Charlotte at St George’s Chapel, reports The Sun.

The family were joined by Prince Edward and Sophie Wessex and their children Lady Louise Windsor and James, Viscount Severn.

The Queen, however, was not in attendance after Buckingham Palace previously said in a statement that she was “not expected” to be there.

Instead, it was expected she marked the day at a small chapel in Windsor Castle.

There have been ongoing fears for the Queen’s health after a new rule was issued by Buckingham Palace stating her attendance at any event will not be decided until the day and, no matter what, she won’t go along alone.