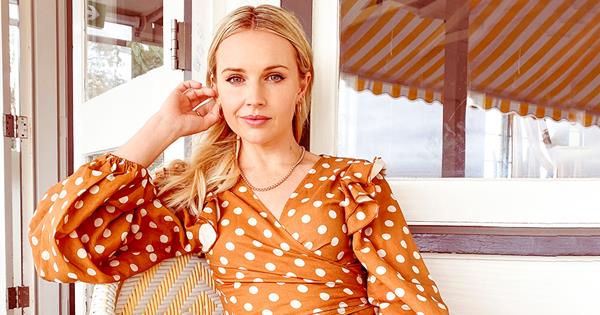 She’s just launched the third season of her podcast Pretty Depressed, in which she shares the mental health issues she’s faced as she chases her Hollywood dream, but while Kimberley Crossman is using her platform to generate important conversations, the Kiwi screen star has a confession.

“I just don’t find my depression super-sexy,” the 31-year-old Aucklander admits to Woman’s Day, explaining the condition, coupled with her anxiety, has impacted her attitudes to intimacy, relationships and self-confidence.

After being diagnosed with depression in 2019, Kim recalls she was so terrified she’d be “taken away in a van” if she confided in a counsellor, she had her sister Rochelle Sheldon attend a therapist first to prepare her for what to expect.
Rochelle and also Kimberley’s then-boyfriend Josh became her “biggest rocks”, and remained key supporters as she got valuable professional help. In fact, Kim credits them with saving her life.

“I have so much love for Josh because he handled everything so well,” the Creamerie actress tells Woman’s Day. “He and my sister were pivotal in me getting help. I owe them my life because without them stepping in, there’s a huge chance I wouldn’t be here today.

“Josh has gone through his own traumas in life, come out the other side and has a great perspective on the world, so he made me feel safe. But not everybody has those people in their corner. It’s why I feel a huge obligation to have these dialogues openly and publicly, as uncomfortable as they are.”

It’s why Kim started Pretty Depressed, chatting to guests like Green MP Chlöe Swarbrick and fellow former Shortland Street star Martin Henderson, while chronicling her mental health struggles, as well as conditions like ADHD, in the hope of creating understanding.

This third season of the podcast was inspired by Kim’s realisation that she has more than just depression and anxiety to “unpack in my mind”, such as her people-pleasing traits, which see
her avoiding conflict and sacrificing her own needs.

Kim explains, “Usually how it presents in relationships is that my people-pleasing takes over and I’m like, ‘They like snowboarding, so I’ll learn everything about snow-boarding.’ Or I’ll feel obligated to stay out later to please someone, then have to get up at 4am to learn lines because I should’ve been home by 10pm.”

The star’s romantic relationships are further hindered by Kim’s struggle to love aspects of her personality that are part of her depression.

“I’m far more attracted to people who haven’t seen all my yuck,” she confides. “I don’t find my vulnerabilities overly attractive, so I still have a version of Kim I struggle to show people.

“That’s something I have to overcome – learning to love myself fully, rather than only feeling sexy if I’m the version of me that’s this fun, free-spirited girl. I’m learning to love the jealousy and self-doubt. I’m not there yet with being fully comfortable and confident in my body, soul and personality.”

As she continues working on her wellness, Kim’s also juggling multiple dream projects, like upcoming local reality show Snack Masters NZ and an LA-based series that incorporates her marine biology studies. After a recent trip home, Kim’s now back in California to audition for a role opposite Bridesmaids star Kristen Wiig and then she’s off to Connecticut to film a movie.

She’s also still interviewing big Hollywood names for Three’s The Project. Of her recent chat with Jennifer Lopez, she confesses, “I was so nervous. She’s so stunning and sure of herself, it spun me in the opposite direction!”

Kim’s also adapting Pretty Depressed into a series with the help of Entourage actor Kevin Connolly, who produces the podcast. He’d previously cast Kim in the film Fantasy Life, then raved about her to Woman’s Day as “a beautiful, larger-than-life personality”, adding, “If she becomes a big star, I’m taking credit for discovering her!”

“Rightly so!” laughs Kim. “He gave me my first big job in Hollywood, picking me, an unknown, to work with this insane cast and making me feel like I deserved my seat at the table. When he started his podcast studio, I was one of the first people he asked to do a show, right as I was feeling so s**tty. He’s always cared for me in a funny, brotherly way.

“Sometimes if I’m doubting myself, having people like him remind me I’m doing a good job means the world. I owe a lot to Kevin, not only in my career, but my mental health journey too. I don’t know if I would’ve turned this into a show if it wasn’t for someone I look up to going, ‘You should do this,’ and me going, ‘OK, Kevin Connolly!'”

Help is here
If you’re struggling with your mental health, call or text 1737 to speak to a trained counsellor. For the Suicide Crisis Helpline, phone 0508 TAUTOKO. In an emergency, always dial 111. Pretty Depressed is available now on Apple, Spotify and all good podcast platforms.