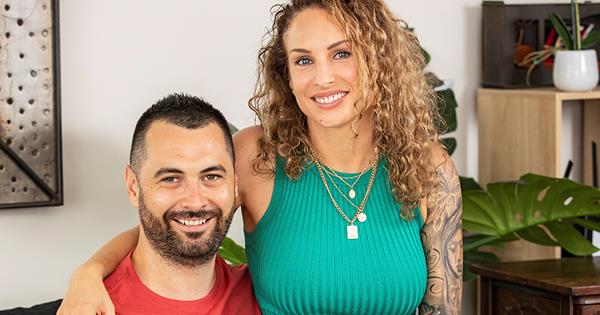 At her lowest point during an arduous battle with drug addiction, Emily Doré didn’t care if she woke up from an overdose or not. Death would have been a welcome relief.

By the age of 26, the former beauty therapist was smoking so much crystal methamphetamine that her weight had dropped to just 40kg. She shook constantly and had infections in her nail beds.

“I was a mess. I was bleeding daily from every orifice of my body and had distanced myself from all friends and family. And like all good New Zealand criminals, I escaped to Australia,” says 39-year-old Emily with a wry smile.

“I went to Sydney and got my physical health back, but it took a while to get my mental health back. After having two abortions in my 20s, I guess they were the catalyst to hitting rock bottom and an intense self-hatred.”

However, the Emily sharing her story today is a very different woman. Now drug-free for 12 years and sitting next to her husband Gavin, also a former addict, the mum-of-one is self-assured, eloquent and glowing with health.

Underpinned by their Christian faith, the Takapuna couple are now determined to help others find life again after addiction and tackle New Zealand’s “rampant” drug problem.

Despite neither having degrees, they have been accepted into post-graduate courses at the University of Auckland (“a miracle in itself!”), which they hope will support their goal of opening a national rehabilitation initiative.

To help fund their studies in health sciences and business, they hesitantly decided to “put ourselves out there” and set up a fundraising page.

“Once you tell people you’re an ex-addict, there is a stigma there,” concedes Gavin, 33. “People don’t understand addiction and the control it has over someone. At first, I was uncomfortable sharing my past. Once you’ve reached jail or you have convictions, society sees you differently. We could either hide from it or own it.”

The pair first met in 2016 at a rehabilitation facility on Australia’s Gold Coast called Transformations. At that stage, Emily had worked her way up from resident to general manager of several of its campuses, when Gavin came in to complete 10 months of rehab.

“It wasn’t romantic at all,” she says. “I simply ran a couple of his group therapy sessions each month.

“But several years later, I was burnt-out and decided to return to New Zealand to my family and study. I didn’t know anyone in Auckland because I had cut off all my contacts when I was in active addiction. Gavin reached out as a friend and asked if I wanted to go on a motor-bike ride.”

“Yeah, there were no intentions behind it,” he smiles. “I wanted to give back to her what she had given to me in Australia when I was at my lowest. But we hit it off and had the same vision of creating our own rehab programme for Kiwis. Six months later, we got married and became pregnant.”

“Becoming parents to our son Israel [one] was not only a dream come true, but it was also the realisation I was truly enjoying life again,” adds Emily, who says she never felt deserving of being a mum.
Along with different upbringings, the two have also had contrasting addiction experiences.

As the eldest daughter of pastors (who were missionaries in the Philippines), Emily grew up in an earth-floored hut in the slums of Manila for her first 10 years.

“We’d do holidays back to Australia and New Zealand. But every time we did, I went into a different school. By the age of 13, I had been to 17 schools and hated everything… life, God, family,” she recalls.

“That’s when I started self-harming, and tried cannabis and alcohol for the first time. I was on the hunt for escapism.”

During her teens and working in hospitality, she smoked meth for the first time, after being charged with her first DUI (driving under the influence) offence. “I felt really upset at work and my colleagues offered me a pipe to make me feel better,” she explains.

Four years later, she was using it four out of every seven days. Barely talking to her family, her 20s were spent “spiralling” on the Auckland party scene.

“Each relationship I had got more dysfunctional and abusive. I wanted to die. When you get that low, you stop caring about yourself,” she tells. “But I found my way to the Gold Coast and entered into rehab. I loved it. It was the hardest thing ever, but compared to what I had been through, it was a breath of fresh air.

“I loved learning every day about concepts of recovery, surrounded by a healthy community.”

Not only did Emily find herself under the expert care of drug addiction specialists, but she began a spiritual journey that she credits with saving her. “Slowly, I rebuilt my faith, completed a Diploma in Theology and realised I’m called to help really broken people.

“I also feel incredibly grateful for my family,” she adds. “My parents [Mick and Ruby Duncan] are now my best friends and I’m developing relationships with my two siblings.”

Gavin grew up in South Auckland’s Manurewa and was a high-achieving national martial-arts champion.

“I spent a decade doing martial arts from age 10 to 20. During that time, I was exposed to a mentality in that scene that you could use drugs recreationally if you were smart,” he says.

“So I believed I could do drugs as long as it was over a long weekend or in the school holidays and I remained high-functioning, achieving my day-to-day responsibilities. It almost empowered me to believe I was in control of the drug use.”

At 22, his career in sales and marketing was going so well, Gavin decided to move to Australia.

“I was earning big money and bought a house with my then-partner. That relationship unravelled and I went through an unfair dismissal with my job. I couldn’t maintain the mortgage or the car loan and I couldn’t find work.

“During that time, I was reintroduced to the drug scene. And I thought I had control of using again. But this time was different. I had lost my identity with the job loss and my world had crumpled.

“I started selling drugs. The best thing that happened to me was when my house eventually got raided by police.”

He was charged with drug trafficking among other convictions and spent two years on bail.

“In that period, I wanted to die and attempted suicide. It was a really dark time. I was looking at seven or eight years in jail. I had never had anything to do with criminal activity prior to that.

“My lawyer told me to go to rehab, so I turned up to Transformations to do the 10-month programme. Then I had my hearing at Brisbane Supreme Court, where I was sentenced to four months, which was a miracle, on the back of my rehabilitation.”

Then 27, Gavin was sent back to New Zealand as a 501 deportee. Wearing the clothes he had worn to court, he had only a backpack with him and ended up in a “supported living” house run by Gracegate Centre church on Auckland’s North Shore.

Together, he and Emily have since helped develop an after-care programme for post-treatment residents in those houses. They also work part-time as a business consultant and therapeutic coach respectively.

“The methamphetamine problem here is just out of control. And it’s really hard for people who don’t have the drug background to be able to go into those places and gain respect and speak into addicts’ lives.

“I want all of the pain and all of the mess we’ve gone through to be used for good. Ours isn’t just a love story – I believe we’ve been brought together for a greater purpose and to show people there is hope.”

To donate to Gavin and Emily’s fundraiser, go to givealittle.co.nz