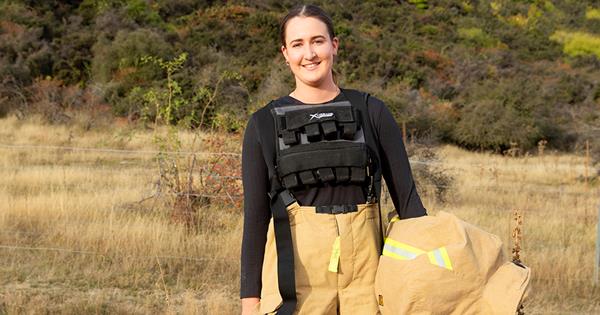 Instead of blowing out candles on her birthday, the Wānaka hero will be lacing up her hiking boots and doing the hard yards for her charity

At just 21, Elise Stables has packed more into life than most. She’s a volunteer firefighter training to be a helicopter pilot and an adventure junkie passionate about using her skills to support those in need.

To celebrate her 22nd birthday, she’s come up with the lofty goal to summit three Wānaka mountains in one day, wearing more than 15kg of structural firefighter gear – all to raise money for CatWalk Spinal Cord Injury Research Trust.

Starting at 5am on the morning of her birthday, May 28, Elise will hike up Mt Roy followed by Mt Isthmus and finally Mt Iron. In total, the elevation she climbs will be 3214 metres – more than 10 times the height of Auckland’s Sky Tower.

“I love having a challenge,” explains Elise, who initially wanted to partake in the annual Sky Tower Firefighter Challenge.

“I thought Covid might muck it up, so I woke up in the morning, saw the mountain out my window and came up with this idea. When I worked out the distances, I was like, ‘Woah, well, I’ll see if I can do it and do it for charity.'”

While Elise is fiercely determined, she anticipates her comfort levels will be sorely pushed. The breathing apparatus set she’ll be wearing weighs around 15kg, and with the full structural firefighters uniform, including helmet, she’ll need to be mindful of overheating and dehydrating.

In preparation for the summits, she’s been in the gym daily, following a specialised exercise programme and hikes the mountains every week.

“I’ve been training with a big rock in my backpack,” laughs Elise, who wears her uniform while training and is always happy to explain what she’s doing to the confused or curious hikers she passes.

“It’s been really cool to see how many people want to get involved,” says Elise, who will also be joined by friends for the last hike. “I’ve passed other firefighters from all around who’ve said they would love to come along. I just wanted to show people how lucky we are to be able to climb up a mountain.”

Choosing to support CatWalk was a no-brainer for Elise, who grew up with horses and saw how catastrophic spinal injuries can be when several of her friends had bad falls while riding. CatWalk funds research into cures for spinal cord injuries and associated paralysis.

“It’s a really prominent thing in horse racing, so I got to know CatWalk and loved their work,” tells Elise. “In the fire brigade, we also deal with so many car crashes as first responders, so it was really relevant and obvious to me to support them.”

It’s not the first time she’s given it her all for the worthy organisation. In 2019, Elise was accepted into the Mongol Derby – a 1000km race across Mongolia riding wild horses. It has been dubbed the toughest and longest horse race in the world.

She spent a year training full- time for the epic 10-day race and completed it aged 19, raising funds along the way.

It was this experience which first inspired her to move to Wānaka and pursue her dreams of becoming a helicopter pilot.

“Growing up, I had so many different ideas, but I never thought I’d be a pilot,” says Elise, who in her younger years was a competitive horse show jumper with a goal to go to the Olympics.

“After the Mongol Derby, and all the places I saw and people I met, I definitely got the bug and wanted a job that I could travel the world with.”

Wānaka relies solely on its four volunteer firefighter crews for all call-outs in the area, which also include acting as first responders to other medical events and accidents. On a busy week, Elise and her colleagues can attend up to six incidents.

It’s a huge responsibility and involved eight months of training and upskilling, but Elise insists it’s one of the best decisions she’s ever made. She also hopes it will provide relevant experience for her to one day fight fires from the sky as a helicopter pilot.

“I love to be busy, but I couldn’t have imagined it would be so amazing. There’s not many girls, but they’re so inclusive. I absolutely love it,” enthuses Elise.

“The dream job would be to fly and fight fires, and what better way to learn about that than as a volunteer firefighter?”

To support Elise and donate, visit her Givealittle page.