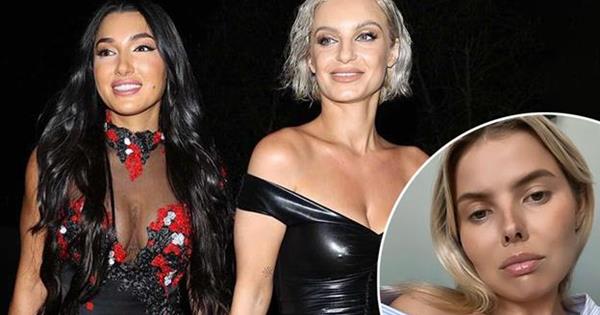 The cast of Married At First Sight are feuding again after Ella Ding and Domenica Calarco took to social media to respond to claims made by rival Olivia Frazer.

On Sunday Olivia responded to a fan question about OnlyFans and alleged that while she had her social media accounts “shut down” during filming, Domenica didn’t.

“I had an issue with Dom being given special treatment by production, like (among other things) being allowed to keep her social media accounts public and active during filming,” she wrote.

“(Which I showed producers and my cast mates, hence the whole ‘photo scandal’) when the other 21 of us had to shut down our accounts or give our passwords to production.”

It’s common practice for reality TV stars to have their accounts managed by producers during filming and when the show goes to air, though the level of control varies.

Olivia appeared to be suggesting that while she and other MAFS stars had to hand over total control of their accounts to producers, Domenica was subject to a different set of rules.

“It was never about the individual: it was about how rotten producers are. But they can’t show you that,” she added.

But just a few hours later Domenica and MAFS bestie Ella Ding were taking to their own Instagram stories to refute her claims.

WATCH: Domenica in the middle of MAFS nude photo scandal

“We had our Instagrams the entire time. I posted when I was in Queensland with Mitchell,” Ella insisted in a series of videos posted to Domenica’s account.

Domenica chimed in, “We’re gonna get the recipients of the photos we posted while we were in MAFS. We had all our social media accounts.”

Speaking with a devil filter over their faces, the two women insisted that they had full control of their social media accounts throughout filming and airing.

Though they didn’t say Olivia had the access, the pair made it clear they and other cast members didn’t have their accounts “shut down” as Olivia claimed.

Domenica also slammed Olivia’s allegations that producers gave her preferential treatment, saying, “The bulls–t of the producers being selective… I’m sick of the bulls–t. Liv, get over it.”

Meanwhile, Ella pulled up photos she shared to Instagram during filming; one posted on January 6 before the show aired, as well as shots from her and Mitch Eynaud’s trip to Queensland during filming.

“If we didn’t have our social media accounts, how did she post?” Domenica demanded.

It’s far from the first time these MAFS stars have taken to social media to lash out at one another, with the “nude photo scandal” from the show’s ninth season dragging out in the months after the finale.