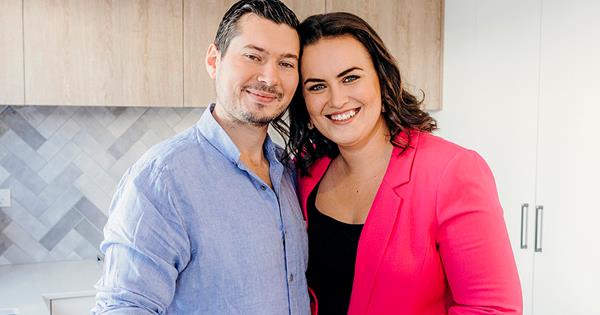 It was cooking that first brought these two together and now their relationship is hotter than ever!

Elliot McClymont says he has a lot to thank MasterChef for. Dubbed “Elegant Elliot” by the show’s judges, the Auckland cook has impressed with his sophisticated and delicious dishes from day one. But it’s not MasterChef NZ that Elliot’s talking about – it’s his high school cooking competition “MasterChef Long Bay College”.

“That was where we met!” laughs Elliot, 27, introducing his gorgeous wife Sam to Woman’s Day. “I saw her in the corner cracking chestnuts and I was like, ‘Oh, yeah, quite hot!’ So I walked over there, made a few jokes and the rest is history.”

It’s been 11 years since the pair met and, ever since, life has been dominated by food, with the pair co-managing acclaimed eatery The Tasting Shed, before Elliot co-founded local spirits brand
Blush Gin.

“We’ve managed to grow together, not apart,” Elliot nods. “We ran a restaurant together for two and a half years, then started this company. I mean, if you want to marry someone, see if you can work with them! At the end of the day, we’re high school sweethearts who shouldn’t have worked out, but we did.”

Sam laughs, “Yeah, do a busy Saturday night dinner service during Christmas together – that’ll do it!”

The pair are each other’s greatest support and when Elliot came home from work after a terrible day, Sam figured it was time her husband applied for MasterChef NZ.

“I’d had an absolute belter of a day and Sam had seen the call-out for applicants online a few weeks before,” explains Elliot. “We’d had a chat about logistics before then – could I even take a few months off work? But then after a really s**t day, it was like, ‘Right, we’re doing this!’ It was the day before applications closed.”

The couple then quickly embarked on some prep for the show, learning new techniques and researching recipes before Elliot departed for Queenstown. However, in true MasterChef fashion, it wasn’t without its disasters.

“I’d seen on the Australian MasterChef that they had to make ice cream, so we rushed out to get the stuff we needed, then I started experimenting with roasted rum and banana ice cream,” he remembers. “But I put so much bloody rum in the bananas, it blew the oven door off. Lesson learnt!”

“It was a brand-new oven,” Sam says dryly, shaking her head. She adds that watching her husband on telly has been a surreal experience and she was worried about how Elliot would be portrayed on the show.

Sam shares, “I was thinking, ‘Is he going to be the villain?’ But he’s exactly the same on screen as he is off, which is awesome. I’ve met a lot of the contestants now and they all love him too. But it is weird watching him – I can see some of the faces he makes and I know exactly what’s going through his head!”

For his part, Elliot says his time on the show has been an “insane, intense dream” – he likens it to being with a “crazy dysfunctional family”. He admits to struggling with being away from Sam, as
well as his family and friends, especially when Sam came down with a bad case of COVID during filming.

“Most of our support system was away at the time too, so she was by herself and of course I’m down in Queenstown filming,” he says. “I felt really helpless. I was on the phone, telling her, ‘Hey,
it’ll all be OK!’ but in all honesty, I really struggled that week. I’d been away for five weeks at that point and it was all just poor timing.”

Still, Sam understood that her husband was exactly where he needed to be. As a foodie herself, she couldn’t be more supportive of Elliot – although she still holds the title of baking queen in their household!

“I’m the cook and she’s the baker,” admits Elliot. “In our jobs, we’ve always been surrounded by really good food and that influence definitely comes back home. But we’re a great team and
life doesn’t just stop because you’ve decided to enter a reality cooking show.

“She was truly amazing at keeping everything going when I was away.”

Still, Sam had sent Elliot away with little notes hidden in his suitcase to make sure he felt her love and support all the way through the intense competition.

“There were 10, I think, because we didn’t know how long I’d be there for, but it was so nice every weekend opening these little notes,” grins Elliot. “It really helped buoy me, especially if I’d had a rough cook. She really is the best!”