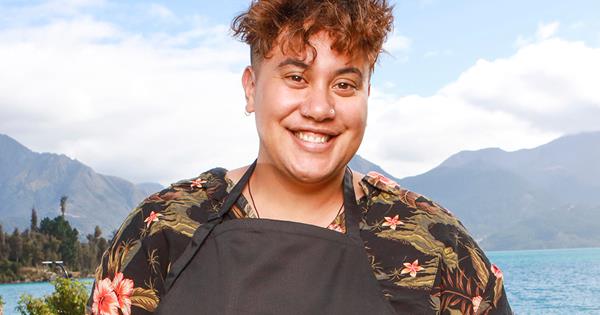 It was a moment no young girl should have to see. Pushing open the door to her mother’s bedroom, 14-year-old Naomi Grace peered through the gap and saw what looked like her mum’s last breath as she succumbed to bowel cancer.

“It was like seeing her wairua [spirit] leave her body,” Naomi, now 29, tells Woman’s Day. “I didn’t realise until much later how traumatic it was to see her passing away and being taken away by
the undertakers.”

The death of her biological mum Julie Kararaina Grace – as well as her tough childhood, which often saw Naomi struggle to find enough food to eat – would go on to be one of the MasterChef contestant’s biggest influences.

These days, the Hamilton videographer has found healing in cooking, but she also credits her foster mum Felicity for coming into her life at just the right moment.

“She’s the inspiration I wish I had when I was younger,” nods Naomi. “I met her in my teens and it was the perfect timing for both of us. I was so intrigued with the food she’d cook – like a rosemary slow-cooked lamb shank or eye fillet steak. I’d never had food with wine in it and it just blew my mind, like, ‘Woah, why are my knife and fork just sliding through this?!'”

Felicity also helped Naomi process her mum’s death, which had been giving her recurring nightmares. Together, they also tried to hold on to Naomi’s memories of her mum by trying to recreate her cooking.

“She never showed me any recipes, so I remembered things by smell and taste, which I’d try to recreate,” shares Naomi, who’s now focused on giving modern Kiwi cuisine a twist with traditional Māori ingredients.

“I love the tikanga [customs] of kai and the togetherness it brings,” she explains. “How people sit down and share korero over meals prepared by one another. My dream one day is to have my own cooking show where I travel around the country using locally sourced produce to create delicious culinary masterpieces.”

After everything she’s been through, Naomi reckons she’s got the resilience it takes to make it to the final of MasterChef.

“I definitely feel like I can survive,” she says. “From losing my biological mum, to going hungry as a schoolkid with no lunch, and even starving in part of my adult life, I’m sure I’ll be able to handle anything the show throws at me. My plan is to just grab it, run with it and give it my absolute best shot.”

And her family, especially Felicity, could not be prouder.

Naomi smiles, “She called me last night after watching the show and she was in tears. She said I came across really well, which really humbled me because she was the first person I called when I got handed my MasterChef apron.”

As for her biological mum, Naomi felt Julie’s presence on the Three show’s set, and says she tried to honour her spirit and favourite flavours every time she stepped into the kitchen.

“Every day when I was cooking, I would see a piwakawaka or fantail, which is a messenger bird, so I knew it was a message from my mum,” she says. “I was excited knowing I had her watching over me. I couldn’t see her, but I could feel her.”