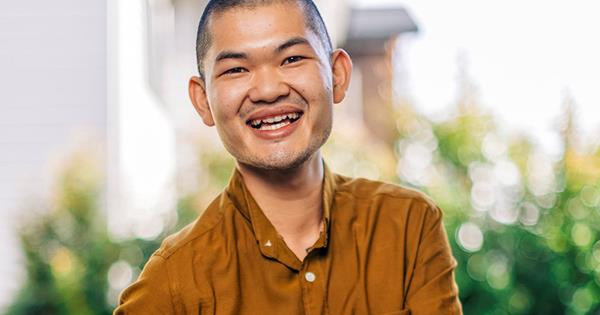 In the MasterChef NZ kitchen, Sam Low is strong, confident and more than happy to take a bold risk with a dish.

He’s the same in real life too – but the self-assured and resilient Sam you’re seeing on the telly is actually a very new Sam, one who is still getting used to being his true and authentic self for the world to see.

He admits to Woman’s Day there’s no way that 2020 Sam would ever have been able to compete in a competition like MasterChef.

“I only came out to my parents a year-and-a-half ago,” reavels the 30-year-old. “I was closeted for a long time. I’d come out to my friends when I was around 24, but I was living overseas because I didn’t want my mum and dad to know my truest self.

“I was working in coffee and excelling in that – I represented New Zealand as a barista champion – and that seemed like the perfect excuse to be busy and having to stay in Canada and Australia.”

Returning home as Covid ravaged the world in 2020, Sam was finally forced to face up to his truth, telling his parents, mum Fong Siu Fong and dad Hon Chong, who he really was.

“I painted the worst possible scenario in my head and you live with that for a long time, but I had also built confidence over time and I had a community around me so that even if the worst happened, it would be all good,” explains Sam.

“But I told them and I knew everything was OK because then they made me all my favourite things for dinner the next day – and in my family, we don’t necessarily show understanding with words, it’s food.”

It was a big moment for Sam that came with huge relief – “although it’s not like the movies when everything is suddenly perfect in every part of your life”, but it was still a huge weight that had been lifted and it inadvertently set up the next incredible chapter of his life.

“I couldn’t have entered a show like this without being my true self, I know that. If you had said to me a year and a half ago that I’d be in Woman’s Day talking about my sexuality…I’m pretty much an open book now as a double minority – a proud gay, first-generation Kiwi – and I have to allow that to show on the plate.

“I mean, you can’t show homosexuality on a plate,” he laughs, “but you can show that I’m not held back or restricted any more.”

Sam first made waves in Aotearoa during his two weeks in quarantine when, bored and determined to whip some average-looking MIQ food into something special, he began transforming his meals into beautiful boujee, fine-dining inspired plates. It was just a bit of fun and a way to pass the time, he says, until his posts went viral – helped in part by a share from Prime Minister Jacinda Ardern, who was a fan of his work.

“It definitely wasn’t the plan to become Instagram buddies with the Prime Minister and go viral – who can plan that!” he smiles. “I just love playing with food and it was a fun, positive thing to do at quite an anxious time for everyone.”

So if the Prime Minister is still following you on Instagram, do you reckon she’s rooting for you in the MasterChef kitchen?

“I mean, I don’t think she’s sitting down and watching the show every night, she’s pretty busy,” he laughs.

Now, with the support of his family and his chosen family – close friends Tian Yiang Li, Bob Dougan, Ruby Jet White, Amanda Grace Leo and Jenna Wee – Sam’s happy, confident and determined to give the competition his all, not just for himself but in order to represent and make space for others like him in the food industry.

“They’re amazing – we watch the show together. They’re incredible, they’re powerful. They all have so much mana and I really love their support.

“I didn’t think working with food was an option for me when I was younger,” he continues.

“I was so repressed in so many other ways – sexuality, but also career opportunities. I was into other things that are deemed quite feminine, and then hospitality came up and I was good at it. I worked in coffee for a long time and I loved it, but this was always my true passion and everyone should be able to choose what they want to do, right?”

And part of that journey has been reconnecting with his Chinese roots and embracing traditional styles of cooking – with a modern Sam twist, of course. It’s a product of being in the middle of two worlds – his parents’ past in China and his future in New Zealand.

“I only looked into my Chinese heritage a year or two after I first came out,” he explains.

“Growing up, I had a lot of first-generation friends, but we never talked about the struggles, or the positives, that come out of being the first Kiwis in your family. But food was the one thing that was always certain.

“So that’s what I’m bringing to the table – literally!”