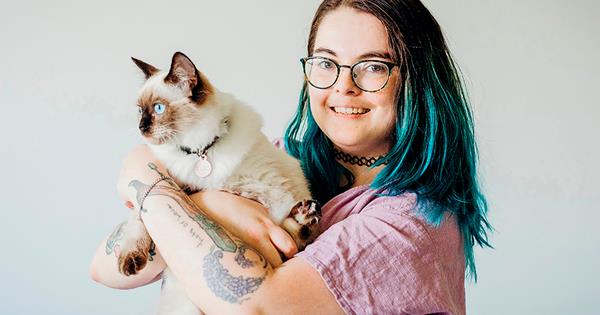 Molly has discovered the key to understanding mysterious moggies

If Molly Kelsey looks like the cat who got the cream, it’s because she feels like she’s landed the purr-fect job – being paid to talk to feline friends every day.

The 30-year-old Aucklander is a qualified cat counsellor, who spends her days communicating with tabbies and toms (and their owners) to address less-than-desirable behaviours.

While dog trainers are a dime a dozen, cat whisperers are rare – there are only a handful in New Zealand – so Molly is used to people doing a second take when she tells them what she does.

“They often think I’m joking or can’t believe there is such a job,” she laughs. “Their next reaction is, ‘Can you fix my cat? She’s nuts!’ or, ‘Cats can’t be told what to do!'”

This latter reaction just has Molly shaking her head and smiling. She insists they can be trained – and that she can tell exactly what a cat is thinking by reading physical cues owners might miss.

“Cats have very expressive body language and facial expressions if you know what to look out for,” explains Molly. “Pupil dilation, ear position and what their tail is doing can tell me a lot about their current mood, which then helps me figure out what their problem might be.”

Growing up with cats from day dot, Molly’s had a lifetime to decipher feline behaviour.

“When I was born, my parents received two cats as a ‘welcome to the world, baby’ gift, as you do! I had three cats during my childhood – Monty, Thelma and Charlie. Monty was a particular favourite. He’d snuggle up beside me in bed and I’d read to him, although he had a not-so-endearing habit of leaving me gifts of dead mice on my pillow!”

When Monty passed away, Molly started fostering, looking after more than 50 cats and kittens over the years. Of those fosters, there was one she couldn’t bear to part with.

“Frodo was my ‘heart cat’. I fell so in love with him that I had to adopt him. He had so many quirks, including trying to catch butterflies and sleeping under the covers with me with his head on the pillow.”

Molly always knew she wanted to work with animals, but it wasn’t until her stint in a vet clinic that she realised she wanted to commit to cats.

“People would always comment how good I was with animals, which was a consolation as people were not my forte!” she laughs. “After qualifying as a vet nurse, I worked at a small animal practice and noticed how many cats needed help, but how hard it was to find that kind of support.

“I recall a heartbreaking case where the cat was over- grooming due to stress. The family had brought a baby home without preparing the cat and he wasn’t coping well. Cases like that really weighed heavy on my heart and I wanted to change things. When I stumbled across the behaviour field, I knew I’d found my path.”

Molly went back to university and did a two-year postgraduate in feline behaviour. In June 2021, she launched The Cat Counsellor and now she earns a living with problematic pusses.

The most common issues people seek help for are aggression and multi-cat tension, as well as cats who soil inside, damage furniture, pounce, take a dislike to a new member of the family (human or animal), or are anxious about travel or vet visits.

Some of Molly’s more memorable cases include a cat burglar who would steal underwear from a neighbour’s house and a feline who would attack anyone who sat in their favourite spots, resulting in bloody injuries that required stitches. In that last case, Molly’s consultation saved the cat from being put down.

Molly also uses her expertise to work pro bono for the SPCA. “That’s really rewarding,” she smiles. “I work with tricky behavioural cases to give them a good chance at becoming successful house pets and reducing the probability of them being returned after adoption.”

When asked whether it’s cats or humans that cause many of the issues she sees, Molly’s response is quick.

“I hate to say it, but it’s us!” she exclaims. “It’s due to a lack of knowledge, plus there’s a lot of misinformation. There are tonnes of articles on how to train a dog, but because there’s not much written on cats, most people don’t know where they’re going wrong or don’t recognise there are things you can do to help. I really hope to change that.”

Despite her love of cats, Molly and her ecologist partner Tane don’t currently own one, although they share responsibility of their flat cat Bowie.

“I also have two rats named Vinnie and Pudge, and a 15-year-old dog called Alfie,” says Molly. “He’s a papillon-Chihuahua cross and, at 3kg, he’s smaller than most cats.

“After 13 years of fostering cats, I realised he’s no longer happy sharing the house with kittens, so I’m giving him a break. Luckily, I get my fill of cats every day at work!”