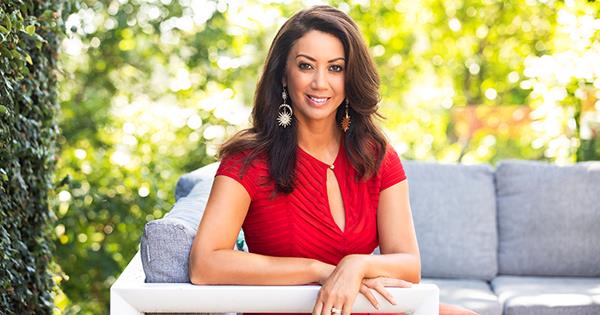 There are some things all of us would like to put in the “too hard” basket. But Miriama Kamo is not one to shy away from a challenge, even if it means stepping way out of her comfort zone.

One of the toughest things the Sunday presenter has done in her long career in journalism is sharing her personal heartbreak in a story on TVNZ’s current affairs show. Last year she covered the issue of how people coped with losing a loved one during lockdown and the trauma of not being able to farewell them properly because of the restrictions.

She took the brave step of including what she and her whānau went through after her beloved father Raynol Kamo died on the first day of the level-four lockdown in August. Thankfully Auckland-based Miriama, who is one of five children, was able to get to Christchurch two days before her dad died and the borders were closed.

However, navigating his tangi at level four was fraught with difficulty. They held on to his body, hoping alert levels would change quickly, but after seven weeks gave up – Raynol had to be buried whether the family could get to Christchurch or not.

Gut-wrenching footage that screened as part of her Sunday story shows her sobbing while watching her dad’s tangi online.

Miriama, 48, says it took her a while to decide to put herself in the story, in which she interviewed two bereaved people about the impact of losing loved ones during lockdown.

“As journalists that’s not what we’re trained to do; the story is not about us. But I had talked to my husband about how emotional Paul Te Hiko – who lost two brothers to Covid during lockdown – was, and when he asked me if I was going to put the footage of myself crying in the story and I said no, he said, ‘Isn’t that a double standard?’

“And that made me think, ‘I have to treat myself as I would any other person in the story. If it is okay for me to share their emotion, then I have to consider sharing my own.’ I realised that what I was feeling would be shared by others going through the same thing but people weren’t talking about it.

“I wanted to provide a platform that would encourage people to have a conversation about what happens in the case of a death when you can’t exercise the rituals we normally carry out to honour the person and acknowledge their loss.

“It helped me to put words and emotions to my own grief, and it was actually a very healing story to do.”

While it is the most deeply personal story she has ever done for Sunday, there are others that have also been incredibly emotional. The show is celebrating its 20th anniversary and looking back over the many, many subjects she’s covered over the years, Miriama says one of the stories that left the biggest impression on her was reporting on the historical abuse of children at Porirua Hospital’s psychiatric unit. She did the story as a young reporter in her early days with the show and says it was a watershed for her, not just as a journalist, but as a person.

“I learned so much about human nature,” she says, recounting how she talked to former patients who were put in the hospital as children, although they didn’t have psychiatric issues.

“There was just no room in the welfare system, so they were put in mental institutions. There were kids as young as eight living alongside some of the most unwell adults in our country. The allegations of abuse were horrific, not just at the hands of the adult patients but also the staff.

“A couple of former staff members came forward to speak about their experiences and one former nurse told me that the choice they had was to join in the culture of abuse or leave. I thought telling his story showed great courage – he wanted to tell people how a normal, well-adjusted adult could end up engaging in behaviours that would never have occurred to him before.”

Miriama stayed in touch with some of the patients she interviewed and her first thoughts were about them after the story earned her the current affairs reporter of the year award at the Qantas Awards in 2005.

“It was bittersweet because on one hand it was wonderful to win this big award, but to win on the back of people’s misery, albeit while revealing it, was a very odd moment.

“I took the winnings and went to Hokitika, where I bought some pounamu, and I travelled around the country catching up with everyone who had been involved and giving them the pounamu to say thank you.”

Starting work on Sunday two decades ago was a challenge for her, given that unlike other members of the original line-up, including Cameron Bennett, she didn’t have a background in news reporting.

Instead, after studying journalism at New Zealand Broadcasting School, she’d worked on kids’ show Get Real, then cut her teeth as a journalist on the arts and issues programme Backchat, and had been a freelance producer and researcher on lifestyle shows like 5.30 with Jude and Location Location Location NZ.

By 2002, she had a plan for the next stage of her career – she had her heart set on travelling to the UK to work as a director. She’d got her visa and was ready to go when TVNZ’s then-head of news and current affairs, Heaton Dyer, called her in for a chat about opportunities at the state broadcaster.

“I had no nerves because I had no intention of working there,” she recalls. Miriama turned down several offers, including joining the Holmes team, until Heaton told her about a new programme called Sunday that was taking over from 60 Minutes.

“That had been my dream since I was a teenager, to work on a long-form current affairs show. So that was the end of Britain.”

She admits worrying she wouldn’t be accepted.

“I remember my first day, walking into TVNZ, and thinking, ‘People aren’t going to like me because I’m a really left-field choice for this. I haven’t worked in news, I haven’t worked my way through the ranks to make it onto a long-form current affairs show.’

“But I was philosophical about it. I thought, ‘Well, that’s fair enough if they don’t like me. I just have to work really hard to earn this honour. I will do my damnedest to prove myself through my work.'”

If anyone at TVNZ was put out by her scoring the highly sought-after job, they didn’t make it obvious. “Everyone was really supportive and I got on with the job, and it was fantastic.”

After three years on Sunday, Miriama was asked to front and report for 20/20, which she did for the next six years. She then decided to go to Germany to work for international broadcaster Deutsche Welle and had everything sorted when once again Sunday messed with her plans. She was asked to return to the show as its presenter as Cameron Bennett was moving on. It was too good an opportunity to pass up. “So that was the end of Germany,” says Miriama.

As it happened, the timing proved to be perfect as she discovered she was expecting her first child, daughter Te Rerehua with husband Michael Dreaver – who has a son, Sam, 21, from a previous relationship – and it would be easier being pregnant at home instead of in a foreign country. “Being pregnant was a good distraction from how big a deal it was to front the programme. And while not going to Germany was a sacrifice, it was worth it for Sunday. I don’t feel like I missed out on anything. Instead, I have had a really wonderful career.”

She’s quick to point out that Sunday is a collaborative effort, with many members of the team, such as producers, camera operators and editors, unseen by viewers. “For example, I could never have told my father’s story without story producer Julia Sartorio.”

Miriama says she’s been fortunate to work with some incredibly talented people over the years, including current executive producer Jane Skinner.

A certain level of fame is an unavoidable byproduct of being on the tele, but not something Miriama has ever courted – it’s just part and parcel of the job.

“It was never a driving factor but it’s okay, I’m used to having a public profile. I don’t look at comments on social media though. I know if I saw something negative that would stay with me, rather than the positive stuff.”

One of the privileges of being well known is having a platform to talk about things that are important. For Miriama, that’s sharing her passion for living as sustainably as possible to help slow down the climate crisis.

“I talk a lot on social media about zero waste and I try to do it in an accessible way without having a political edge. It’s a tricky balance, but I think if I can share the joy I find in living this way, it’s a better way of connecting than telling people it’s all doom and gloom.”

She thought long and hard before sharing a recent Instagram post in which she talks about how she changed her diet after a dare from Te Rerehua, 10, to only eat vegetables for a month. As well as the sustainability aspect of cutting out products that come in plastic packaging and involve manufacturing processes, it also led to Miriama, whose weight has always tended to fluctuate by around 10kg, shedding kilos and dropping a couple of clothes sizes.

“I didn’t want to come across as being a weight-loss advocate because I’m not, but I wanted to share what a difference it has made,” she enthuses. “I’ve had back problems for years – which is partly structural, I have scoliosis – but within about 10 days of only eating vegetables, my back pain disappeared. It truly was a miracle.”

Another bonus is that she now fits clothes she hasn’t been able to wear for a few years. “I don’t want to be buying clothes to fit my fluctuating weight and now it’s like I can go shopping in my own wardrobe!”

She has continued with her largely planted-based diet (salmon is an occasional treat) because it’s best for her and the planet.

“I used to be able to polish off a pack of biscuits in one go, or a big block of chocolate, but that’s all gone,” she tells. “I had fun eating that stuff , but now I am getting older I have to do things differently to ensure I am as healthy as possible. And to be honest, because it’s about health and not vanity, it is a very easy wagon to stay on.”