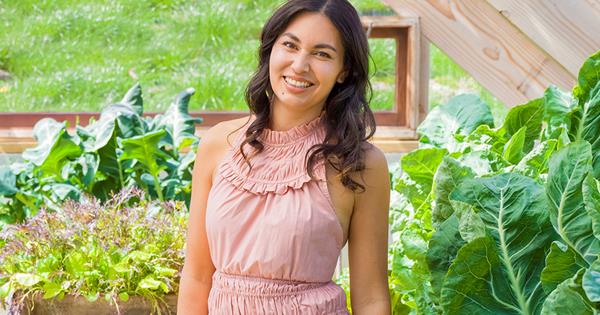 I’m not sure I buy into this whole concept of balance,” laughs Kiwi food star Nadia Lim. It’s 11am on a Thursday and she’s sitting down to chat at her rural Arrowtown home after another hectic morning.

Up at 6am, she’s fed the chooks, harvested the day’s takings from the glasshouse, made the lunches, got the kids up and off, met with farm staff, finished the final pages of her latest seasonal journal, organised publicity for her new family cookbook and prepared for a trip to Auckland for her new role as a MasterChef NZ judge. Nadia, excuse the pun, is a woman with an awful lot on her plate.

“It is a bit chaotic at the moment, but this is just what my life is like!” she explains.

“I keep telling myself I need to take on less, but it never seems to happen because these cool opportunities keep popping up that I can’t say no to.”

It’s two and a half years since the My Food Bag co-founder and her husband Carlos Bagrie, 36, packed up their Auckland city life and moved south to a 485-hectare sheep and crop farm. They have become passionate farmers, transforming the previously conventionally run operation into a very diverse, more sustainable and ethical model of food production.

It’s been a massive labour of love, and there’s no doubt their sons Bodhi, six, and River, three, are thriving in this idyllic environment, but Nadia, 36, admits she and Carlos could never have imagined just how busy it would be.

“Sometimes I say to Carlos, ‘What are we doing? Why did we take all of this on? We could be living a much less busy life right now!’ And he’ll stop me and say, ‘OK, let’s talk about it. Is that actually what you want?’ And pretty quickly I realise that no, I wouldn’t be happy if we weren’t constantly learning, and taking on new challenges and trying to make a difference. It’s a huge privilege to be custodians of this land and to do what we do. It’s just a matter of finding enough hours in the day.”

As well as the farm, her new family cookbook Yum! and many other projects, Nadia has just spent the past eight weeks filming MasterChef, the hit reality cooking show that’s returning to Three after a seven-year hiatus. It’s a walk down memory lane for the foodie, who won the series in 2011.

“It was so much nicer being on the other side,” she says. “Unlike the contestants, my heart wasn’t going a million miles a minute every time I walked into the kitchen.”

There were moments, however, when she was wanted to jump behind the bench and take over.

“It took a bit of willpower not to shout out and say, ‘Why are you doing that?! You should do this instead!'” she admits.

The show was filmed in rural Queenstown – a short drive from Nadia’s place – which made fitting the judging role into her busy life all the more doable. But it still meant leaving at dawn and often not getting home until the kids were in bed asleep. Nadia credits Carlos for ensuring things ran smoothly at home.

“We’re lucky we work for ourselves and we work together. It gives us the flexibility to take things on knowing the other can pick up the slack at home. We’re a good team.”

The pair celebrated their 10-year wedding anniversary in February, although Nadia says “celebrated” might be a stretch. “We sort of looked each other at some point in the day and were like, ‘Oh, it’s 10 years today!’ We had planned to go away or out for lunch or something, but we were flat tack that day, so it didn’t quite happen.”

They might not go in for big displays of romance, but Nadia says her marriage only gets better with time.

“I am genuinely happy every day waking up next to Carlos. I get to work with my best mate and we learn together… it’s so exciting and meaningful. There is literally no one else I could do this with – we are very compatible.”

So does that mean they never argue? “We argue all the time!” she laughs. “But we’re not afraid to and I actually think that’s a good thing.”

Carlos was right by his wife’s side recently when she found herself in the eye of a storm after businessman Simon Henry used racist and chauvinistic language to describe her in an interview. At first, after the story broke, she wanted to keep a low profile, but it was on a flight home, when she was served by a young Asian woman, that she realised she had a responsibility to speak out.

“I’m lucky, I have had years of building up confidence and developing a thick skin. But it dawned on me that it was not actually about me. I looked at this woman and thought she had so much potential, and I didn’t want anything or anyone to bring her down. I felt I had to stand up for other people who might get this dismissive behaviour quite a lot and it might affect their potential.”

Nadia tells us that racism was around her growing up, mainly directed towards her Malaysian Chinese dad Ken, who died from cancer in 2014. Sometimes it was subtle, other times it was nasty comments from strangers on the street.

“Dad would put on a brave face and brush it off, but I could see the hurt in his eyes,” she recalls. “He would say to my mum sometimes, ‘You come to the meeting with me’ because he thought he’d get treated differently if he had her there, because she’s Pākehā.”

“Sometimes a whole lot of little can chip away bit by bit and add up. If Aotearoa really wants to create a culture of inclusion and positivity in uplifting people, no matter who they are or where they come from, it starts with leaders and people who do have a voice and influence because it all filters down.”

At the time of the scandal, she was also dealing with Covid after catching the virus during a trip to Christchurch. While she felt unwell for several days, and her children also came down with symptoms, isolating with her boys was a surprise chance to slow down. “It was actually really nice. I cancelled all my plans, stayed in my dressing gown all day and watched a heck of a lot of TV with the kids.”

It’s clear just how much she adores her children, with Nadia telling us the happiest part of her day is waking up to their smiling faces. She tells, “Bodhi is an emotional soul and a deep thinker. He’s also fiery – he can really spark up when he’s passionate about something.”

River is more easy-going and an absolute lover of life on the land. “He is a real little farm boy,” she beams. “He loves helping me in the garden and he has a beautiful natural knack with animals.”

Nadia and Carlos hoped for a big family, but were saddened last year after a miscarriage at 14 weeks. She went public with the experience in the hope it would help others going through something similar.

“It was a disappointment because we were really starting to get used to the idea of another baby and we were so looking forward to it,” she shares. “But sadly, it happens. It’s life.”

The pair are now putting their family in the hands of fate.

“We’re not desperately trying to make it happen, but if it does, then that would be nice. It’s a case of what will be, will be. We’ll be happy either way. The main thing it taught me was just how lucky I am to have two beautiful, healthy children. It reinforced my gratitude in a big way.”

With MasterChef hitting screens this week, Nadia is excited about what’s to come. She might have a lot on her plate, but stressing out isn’t her style.

“People ask if I lose sleep over things, but there’s just no point. Stressing or panicking doesn’t help, it’s not going to change anything. Life might be busy, but every day is filled with so many simple pleasures when you live on the land. We’re surrounded by snow-capped mountains, I can hear the birds in the trees, I look out at all the food we’re growing right in front of me… I have so much to be grateful for.”

MasterChef NZ screens 7pm Sundays, and Mondays and Tuesdays at 7.30pm on Three and ThreeNow.