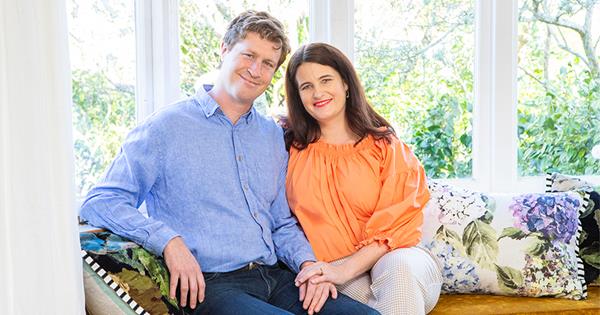 When Nicola Willis arrives at Parliament in the mornings, she’s usually the politician wearing a dash of bright red lipstick with a messy ponytail pulled back in haste.

As a busy mum-of-four, the deputy leader of the opposition has little time to spend getting her look just right. Instead, what time she does have in the morning is spent sipping strong black coffee and perhaps snatching a moment to read a book with her youngest daughter as her consultant husband Duncan Small rallies the clan to get ready for school.

Then, after giving quick goodbye kisses to her brood, Nicola darts out the door and drives 10 minutes from the family’s Wellington home to Parliament, where at times she works until midnight.

“Sometimes I think, if only I could clone myself and have the person who does the full-on parliamentary thing and then the person who gets to do the full-on motherhood thing,” laughs Nicola, who stepped into the role of the National Party’s deputy leader just four years after becoming an MP.

Says the Karori-based mum of James, 12, Harriet, 11, Reuben, nine, and Gloria, six, “I definitely have moments where I wonder if I’m doing what’s right for my kids, or if I’m giving too much to politics, and it can be really confronting and difficult.

“That’s where it’s important for me to know that what I’m doing is purposeful and making a difference. If I’m sacrificing time with my children, it has to be worth it.”

On the morning of our photoshoot, the Wellington-raised politico has made sure their house is spotless. Reuben greets everyone at the front door with a polite handshake and introduction, while a homemade lemon cake sits on the kitchen bench. But Nicola admits the idyllic scene is a far cry from the usual chaos of their busy home.

“Earlier today, my daughter said, ‘Mum, I think this is the tidiest the house has ever looked,'” says Nicola, 41, whose passion and get-it-done attitude saw her replace Simon Bridges as National’s finance spokesperson in March. “When my mother heard I didn’t have anything to offer people during the photoshoot, she dropped in the cake. The people around me, like my parents who live five minutes away, and Duncan, who’s my rock, have been really important in enabling me to juggle family life and politics.”

Two decades ago, Nicola was a successful university debater and debating team captain when she met fellow Wellingtonian Duncan in the Victoria University debating club. She couldn’t help but notice the tall, red-headed guy who had confidence and charisma – as well as jeans that sat an inch too short above his ankles.

“It’s quite fashionable now,” quips Duncan, 42, who previously worked as head of government and industry affairs at Air New Zealand, where he and Nicola first met National leader Christopher Luxon. “I’m just very ahead of my time!”

A year after meeting, the pair became a couple and when Duncan moved to Canberra, Australia, to complete his master’s degree in strategic studies, Nicola headed to Christchurch to complete a post-graduate diploma in journalism.

“That was horrible in a way, doing long-distance, but when we finished it, my feeling was if we survived that, we’d survive anything and so we moved into our first little apartment together in Thorndon,” recalls Nicola.

The pair tied the knot at Old St Paul’s church in Wellington in 2007.

“During our wedding, Duncan’s speech was incredible and so romantic,” tells Nicola. “He read me a poem and had lots of people in tears because it was so sweet. Then we had our honeymoon in Wānaka, which is still a very special place for us to visit.”

Prior to marriage, Duncan thought the couple might go on an OE, until Nicola announced she’d been offered a job working as a researcher for Bill English, who was education spokesperson for National at the time.

“Nicola said she’d do the 2005 elections and see where it goes, and we never quite unstitched ourselves from that,” remembers Duncan, who’s described by his wife as the calming influence in their relationship.

“I’m proud of Nicola when I see what she does, how hard she works and how committed she is. It’s part of what makes it all worthwhile. The tactical mistake, though, is I really could’ve married someone who’s a less good arguer!”

When Nicola decided to become an MP, she’d been working in senior management roles for Fonterra. Upon hearing the news their daughter wanted to get into politics, her parents Shona and James were a little worried.

“While I can be confident and tough, I’m also sensitive underneath it all, so Mum in particular worried about how I’d cope with it.

“I’m definitely one of those people who’s crying to the extent it embarrasses my son if we’re at the movies and there’s a sad scene,” laughs Nicola, whose mother worked as a journalist in the Press Gallery at Parliament until she was born and her father as a lawyer.

“My dad wondered why there were all these things I could do with my life, yet I chose something so hard! But ultimately, they saw that politics was my dream and so they’ve been incredibly supportive.”

Nicola has questioned whether she should show her sensitive side at work, which is a role she admits can be hard – particularly as a mother – when she’s confronted with child abuse cases and New Zealand’s housing crisis.

“Part of my brain says I should be tough, but then the other part says well, actually, keep your heart open because that’s what we’re here for,” she says.

“Increasingly, as I go on in my career, I think it’s important to keep that part of myself open because we’ve got to feel things. There’s no point being a politician if you’re not going to be yourself.”

But being herself hasn’t always landed Nicola the best feedback from haters on social media, who have commented on what she should and shouldn’t wear, including her trademark red lippy.

“I’ve been told I shouldn’t wear that ‘garish lipstick’, but I’m going with it because it’s what I love,” she says. “Normally it’s just robust debate online but sometimes it slips over into getting a bit nasty. I try not to dwell on it because if you let it get inside your head, it can give you a really negative world view and make you pretty down in the dumps.”

Duncan has helped his wife “get out of a funk” after she’s read a hateful comment online.

“The difficulty is keeping perspective because it can feel like it’s everywhere, but it’s usually just a small group of rather nameless people,” he explains. “You’ve got to be able to take a deep breath and not get all caught up in it.”

It’s not only supportive reassurance Duncan helps out with at home. When Nicola took up her fast-paced role in 2018, the couple quickly learnt it was too stressful for both of them to be in demanding full-time jobs, so Duncan switched to working part-time.

“The difference for our family has been amazing, enthuses Nicola. “It means Duncan’s able to pick the kids up from school and be there with them in the afternoon, giving that real stability and consistency.”

“Kids can be challenging, and Duncan gives them his time and focus in a way that’s very meaningful for them. We’re very lucky to be in a position to do this as I know not everyone is.”

Duncan admits one of his secrets for maintaining their successful home routine is making school lunches the night before, which he has mastered thanks to his specialty fruit salads and diverse sandwich concoctions for each child.

“I occasionally get customer feedback saying they don’t like this or that and so I started off with everyone getting the same thing in their lunchbox, but over time they’ve ended up being a bit different,” he says. “It’s lovely to be able to spend time with them and build those relationships, and they’re slowly learning to appreciate my humour more. They’ve even started parroting back dad jokes.”

While Nicola enjoys cooking, Duncan has also taken over home chef duties thanks to My Food Bag recipes, but the busy mum looks forward to preparing meals again in the summer holidays – along with family time at the beach, taking walks and going for bike rides.

“I do get tired, but I get a lot of energy from my work and really enjoy talking to people,” she admits. “On the weekends, I try to take a day off to just chill with Duncan and the kids, having family movie nights and playing Scrabble or doing a jigsaw. I find that really restorative.”

Since having kids, Nicola has learnt to relax more, which hasn’t always been the case for the high-achiever, who reveals she was a perfectionist pre-parenthood.

“Once we had children, that wasn’t really an option any more and it’s been good for me because life’s not actually perfect,” she says. “I’ve become increasingly confident that some of the messiness and chaos from having four kids at home is actually pretty good. It keeps my feet on the ground.”