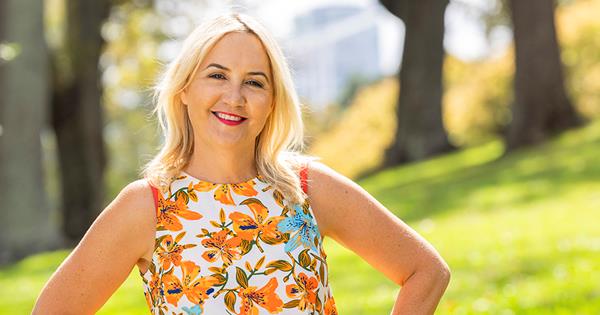 Former National MP Nikki Kaye has emerged from a self-imposed quiet time, following her surprise resignation from politics in 2020. She admits to going underground intentionally for several months and it’s a story of needing to heal, of finding a balance and most importantly putting herself at the front of the queue for possibly the first time in her life.

“I was hiding away from the media because I really, really needed to heal,” says Nikki. “It had been a pretty tumultuous time and my whole life, my whole identity, was tied up with politics.”

Nikki, 42, explains she came into politics as a Young Nat and became a National MP at the age of 28. The list of roles she took on during her time at Parliament is worthy of a high performer.

“I was a workaholic and a political addict,” she tells. “So I went cold turkey and really did go underground to get away from the political system and public policy.”

On top of her many achievements, she was also very open about her breast cancer diagnosis in 2016 and was not afraid to talk about her treatment.

“My health still isn’t perfect, so I need to look after myself in that regard, and I was physically and emotionally burnt out,” she confides. “I just gave everything and I certainly don’t regret that, but I certainly think that my health suffered.”

Nikki was National’s Deputy Leader when she left politics in 2020 and after 12 years in public service, it was time for some long, hard realisations about what the rest of her life would be like.

“I’ve done a lot of work to try to understand how I can get balance, and one of the conversations I’ve had with mates and other people I’m close to is: will I always be like this? If I’m in an environment where there’s so many people to help – whether it’s in politics or some other field – will I ever really be able to shut off and not burn out?”

Nikki admits that her main problem is that she wants to save the world.

“There’s this thing burning in me that loves to help people. There are always people who need help and if you’re someone who cares a lot, like I do, then you can never shut off.”

In finding some balance, Nikki has also spent time dealing with her own mortality as someone who has had to deal with breast cancer.

“There are so many great things that have come from that because most people might think about buying some land somewhere and building a house, but I’m doing that now,” she enthuses. “I have some land on Great Barrier and I’m getting a pod house put on it. I’m not waiting until later, I’m just doing it now.

“And later today my niece is coming over from Australia and we’re off to Queenstown. So, while I loved my time in politics, I’m now prioritising family and friends massively.

“I don’t have children, but when I look at pictures of my nieces and nephews, I realise how much time I missed with them while I was so busy, so I’m playing catch up now.”

However, Nikki does have two cats, Lily and Charlie, who she adores. “Lily is my baby girl and then there’s Charlie, who I bought to be like a little husband for her but that hasn’t really worked out. He’s supposed to be a British Blue like Lily, but I think he’s a bit of a moggy. But they are definitely my fur babies,” she laughs.

Eventually they will come to the Barrier with her and she has no worries about Lily hunting native bird life as she moves very slowly after she broke her back.

“The vet said they could fix her up but it would cost a lot – like $8000. I was distraught and thought, ‘Well, if there is a God I’d tell him I can handle getting sick but I cannot handle you taking this cat.’ I probably would have mortgaged my house to keep her alive. It’s that sort of relationship.”

Charlie, on the other hand, will have full GPS tracking and bells. “We’ll see if there’s some kind of cat training we can do as well.”

When Nikki talks about her place on Great Barrier, she glows. It is obviously a place she feels safe, relaxed and at home.

“When I get there, the first thing I do is grab a coffee, pick up my old car I keep there and put some music on. Then I drive straight to my land. I have a shed on it for building purposes, and I keep a couple of deck chairs there and a bottle of gin,” she tells. “So I sit, sometimes with one of my mates, and I have a drink in the bush.”

Nikki likes to be physically active, so she will head out for a swim or a run, read some books, do a bit of work, plan for the pod house that is eventually going to arrive, and often end up at the local store and the pub.

“Because I was the local MP for the island, I know a lot of people there and it’s a wonderful small community. I like to help where I can to solve things that need solving there.”

Nikki also has two pods with a couple of glass sides that are ready to go on her land after she gets consent, and then another one is on the way which will house the kitchen and bathroom.

“I think I can live in a three-pod arrangement – we’ll have to see.”

Nikki fell in love with the island because aspects of it are like going back to the 1950s when life was a lot simpler.

“I feel like I’m going back in time and that’s part of what I love about it – it’s like a time- travelling machine,” she tells. “Having this healing place is so important for me, it’s sort of become spiritual. I’m not religious, but I’m definitely spiritual and the Barrier is very much that place.”

Nikki says for her, being spiritual means being more at peace with the environment and things she doesn’t necessarily understand.

“There’s a calmness that comes from it,” she explains. “Rather than trying to analyse everything, I just accept it. If I’m walking through the bush at a particular time on the island and the light hits the trees, I feel a sense of calm. I don’t know what that is, but I can tell you that there’s something in that and I’m happy to just sit with that.”

When Nikki is off the island, she is working. It tends to be pro bono stuff she does for various charities including breast cancer organisations, as well as just helping people out who need it – that thing that burns in her.

But she also takes trips to the United States, where she works in the area of education technology.

“When I was a minister, I worked hard to roll out fast broadband and to bring in the digital technologies curriculum,” she recalls. “So what I realised post politics was that if I still want to make a reasonable impact, particularly in the area of education and technology, I needed to do some work in the United States.”

Nikki has an O1 visa for the US, which is for people who are at the top of their field, which in her case is education technology. She has her own company and does various contracts for different institutions there.

She’s about to travel to Los Angeles for a month, there’s also some work in San Francisco and she’s keen to point out she will also be stopping off in Hawaii for what she calls ” a bit of play”.

Back in New Zealand, she is on boards, working with start-up companies and is trying to get a technology apprenticeship scheme for schools off the ground.

“I’m really proud of the contribution I made to this country, but I still think there is a contribution to come. It would be a waste of all the investment that I put in to just stop,” she asserts.

“But I have to feel my way a bit and see how I can make an impact while keeping a balance.”

Nikki knows she doesn’t want to work in a government job, as some other MPs who leave politics tend to do.

“I am actually quite centrist in my politics, and I want to be less partisan, but still contribute.”

Nikki says she still has personal relationships with some MPs and occasionally they call her for what she calls more pastoral care.

Talking to Nikki after her self-created time underground, it is clear she has done a lot of work and achieved most of what she set out to do. To find a healing place, to limit how much she needs to fix things for people and to follow a career she feels passionate about. But there is one thing the Weekly is keen to know: As someone who has spent half her life helping people and saying yes, has she learned to say no?

“That is the story of my life because I didn’t know how to say that word,” she admits. “The reality is, I’ve done a lot of personal work but it will always be a struggle.”

“But what I do now is, I say, ‘I can’t do that, but I can do this.’ So I’m more of a referral service these days because I know the people who have influence in business, the community and the media, so I’m happy to pass them on to them and save them spending 20 weeks to get to the same place instead of having one conversation with someone I can send them to.”

In the coming months, Nikki will see her pod house delivered to the Barrier to join her shed, deck chairs and gin, and hopes to spend half her time there. She also has great plans for an island office.

“It will look out on flora and fauna. Part of the reason for living on the island is that it forces you to have downtime. Sometimes you have to go to the top of the hill to make a phone call. I like that.”