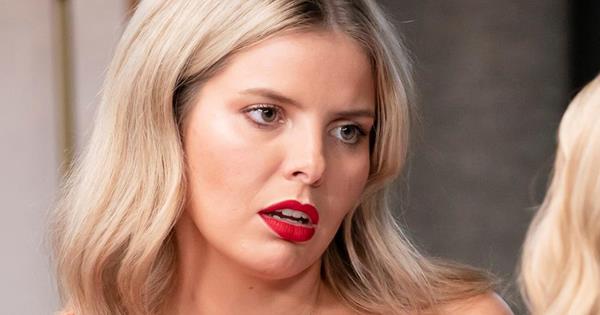 Married At First Sight’s season nine “villain” Olivia Frazer has lashed out at the show and its viewers, calling Aussies who believe the “overproduced” reality hit “d—kheads”.

The teaching student, who was paired with now-boyfriend Jackson Lonie on the TV experiment, made the angry comments in a new video shared to TikTok.

“I’ve lost enough as a result of this show and let’s just say this show is highly edited, overproduced and everything’s out of context,” she claimed in the clip.

“If you believe everything that’s shown on TV you’re a d—khead. It’s just really unfair. Let me live my life, let me have a job.”

The footage was shared by the account @mafs.bachie.gossip but appears to have been filmed by Olivia in her car after photos of her in a job interview leaked.

She was recently spotted on a Zoom interview for a casual role at makeup giant Mecca, following reports that she lost her job after her season of MAFS aired.

Someone recognised her, snapped a photo and shared it online, a move which Olivia called a “huge, disgusting invasion of privacy” in the new video.

“I just want a job to go with it, earn some money, save to go travelling, pay my rent. I don’t want to be on the dole,” she continued, adding that her university has been hugely supportive.

But her privacy comments left some MAFS fans scratching their heads, as Olivia was at the heart of a scandal on her season of the show that involved a serious and intimate breach of another woman’s privacy.

After finding fellow star Domenica Calarco’s OnlyFans account, the teaching student shared nude photos of her co-star with the rest of the season nine cast without her consent.

Domenica confronted Olivia about the gross invasion of privacy on the show, telling her: “I don’t know how you thought that was any of your business to spread that around.”

Though she was unapologetic on the show, Olivia later told Fitzy & Wippa that she recognised that sharing the photos was a “very, very poor” judgement call.

“I definitely didn’t see what was wrong with it until recently because I just thought like, it’s on the internet, it was advertised on several platforms, so I didn’t think it was some salacious secret,” she argued.

The 27-year-old has been plagued by controversy since starring on MAFS, largely due to her involvement in the OnlyFans scandal and her on-screen portrayal.

Though Olivia herself confessed she can be “mean” and “bitchy”, she has since claimed that she has been the victim of overediting on the show.

Other MAFS alumni have made similar allegations in the past, claiming that footage was edited to make them look like a “villain” and draw viewers in.

Bryce Ruthven, Cyrell Paule and Ines Basic are among the many stars who supposedly got the “villain edit” in past seasons, with Olivia joining their ranks in 2022.