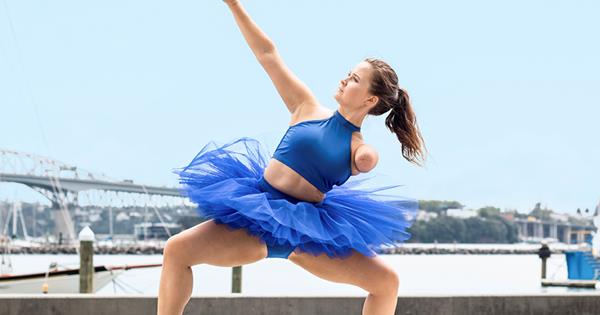 Mount Maunganui woman Brylee Mills is used to getting stared at in the street. After all, she’s a talented dancer who graduated from a prestigious academy in Australia and a passionate public speaker who helps young girls build body positivity.

At just 25, she also bravely launched an events and photography business in the middle of a global pandemic, which has seen her become a fixture on the Bay of Plenty social scene.

But that’s not why people stare. Brylee knows it’s because she only has one arm.

“It’s human nature to look at someone you see as different, but I’d rather have a conversation because I might only have one arm, but I’m the same person as them,” she tells Woman’s Day.

Brylee was six when she lost her left arm in a freak car accident and she still recalls all the horrific details of the day.

“Mum was driving the van with me and my two older sisters, heading to Kai Iwi Lakes up north. We were only five minutes from our campground when the tyres struck gravel and the whole van flipped onto its side, crushing my arm, then dragging me along with it as it slid to a stop. I was trapped underneath the weight of the van. The others had to climb out before me.”

With a long wait for the rescue helicopter, Brylee remembers being comforted by passers-by, who circled round to lift the vehicle to help her out.

“Everyone tried to hide their horror, but once they lifted the van up, I could see most of my left arm was still on the road. There was blood everywhere. I had so much adrenaline pumping that I didn’t feel pain, but I remember the emotions of my family and that trauma stayed with me years later.”

In hospital, Brylee’s mother, who was pregnant at the time, had to break the news to her daughter that surgeons were unable to save her arm. It had to be amputated at the shoulder, leaving a small stump.

“My first words were, ‘Will I still be able to get a job?’ My next thought was, ‘Will I be able to dance?’ I was pretty stubborn. The accident took my arm, but I wasn’t going to let it take away the thing I loved the most. A few weeks later, I was back in ballet class.”

Returning to school, some people were mean, she admits.

“But the best insult they could come up with was ‘One Arm’, so I’d say, ‘Yes, I have one arm. Can’t you be more creative than that?'”

Brylee had several painful surgeries – the most recent was last year, when she suffered chronic pain from nerve endings in her stump. “The pain was so bad, I was on ketamine and about 20 other medications.”

She still suffers anxiety from the accident and has experienced depression in the past. “Sometimes I wish I still had my arm. It can be lonely being an amputee. I do most things one-handed, but everyday things can be frustrating, like doing my hair. Cooking is hard too and I still get anxious if I’m a passenger in a car. I feel better if I’m driving because then I’m in control.”

Talking about the incident with her parents and siblings has helped Brylee address their collective trauma, she adds. “As I was only six, they protected me from emotions they were feeling. I’d lost my arm, but they were mentally scarred.”

Meanwhile, Brylee’s love of dance has helped her through her toughest times. “When I go into the studio, I feel free, like it’s another world. I had to learn to adapt as dance is all about symmetry, so with one arm, I had balance issues.”

Brylee continued dancing in high school and, at 17, she was accepted into an elite programme at Sydney’s prestigious Brent Street Performing Arts Studio. She was the school’s first-ever student with a disability.

Incredibly, her dream was almost snatched from her a second time. Just before she was due to fly to Australia, she was in another serious car accident, leaving her with a horrendous leg injury.

“I was in a high-speed pile-up on the Auckland motorway. My car went into the back of another and my dashboard went through my right leg. It shattered my ankle, cut through my quad muscles and hit the knee joint. Doctors said I might not ever walk properly again, let alone dance, but I was still that determined kid who wouldn’t accept it.”

The dance school deferred her position while Brylee once again faced more operations and painful rehabilitation.

“It was the most challenging year I’ve ever had, but I did it! I got to that school and I was the first disabled student to graduate.”

In demand to dance on TV shows such as New Zealand’s Got Talent and The Voice Australia, Brylee barely had time for dating, but in 2020, she met her partner Alby Ryan, 29, online.

“We went for a walk in Mount Maunganui and I made a joke about having one arm, but it was never an issue. Alby already worked in events, so we knew so many mutual people. We hit it off straight-away and it was a natural progression to go into business together. And he loves cooking!”

Their two companies are called Nowhere, which runs music events, and Somewhere, which is a creative photography studio and shared working space. When she’s not working, Brylee is passionate about changing attitudes to disability.

“It’s a taboo subject. It’s not talked about, yet there are 25% of New Zealanders with some form of disability. Like mental health, it’s something we need to put in the spotlight.”

“Not just tokenism, like having a wheelchair access and toilet, then thinking, ‘OK, we’ve got the disabled people sorted.’ It needs to be right through the event. Can people access food and water, and get close to the stage? It’s about simple things like a quiet space for people who need a mental health break.”

Motivational speaking is something Brylee excels at and she especially loves visiting girls’ schools to talk about body image. “I haven’t got everything figured out, but if I can share my story and inspire others going through tough times, it’s rewarding.”

Her memory of the people who helped lift the vehicle off her crushed arm has become a metaphor for the way she thinks about life. “They physically lifted the van and, since then, so many people have lifted me up when I needed them most. We can’t get through difficult times without others. Life is not meant to be lived alone.”

Brylee challenges people to think how they perceive people with disabilities. “I was in a beauty store the other day and a young girl was staring at my arm,” she smiles. “The mum asked if it was OK if her daughter asked me about it. That was great because rather than telling her not to stare and pulling her away, that little girl will grow up knowing that people may look different, but it’s nothing to be afraid about.

“Yes, I’m an amputee, but I’m also a daughter, sister, lover, dancer, artist and businesswoman. The obstacles in your life do not have to define who you are or who you become.”