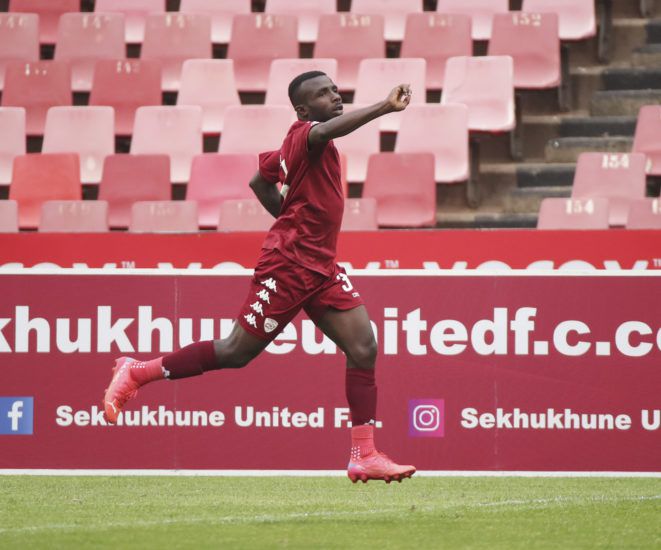 Orlando Pirates have been handed a major transfer boost in their quest to sign Nigerian striker Chibuike Ohizu.

The Sekhukhune United striker has reportedly caught the eye of the Buccaneers after a stellar debut season in the Premier Soccer League.

According to reports, Orlando Pirates may very well be able to land the 25-year-old Nigerian striker from Sekhukhune United.

Sekhukhune however will only let their star striker go if their financial conditions are met meaning the Buccaneers will have to dig deep in their pockets.

“All these talks have been discussed in the offices, and it looks like if there is any team that wants to secure our players, especially the guys like Maart and Ohizu.” a source told Phakaaathi.

“They will have to dig deep in their pockets. We heard that teams like Orlando Pirates and Kaizer Chiefs are interested.

“But there has not been any official communication. I am sure that there are other teams that are also interested, and once they make official offers,”

Buccaneers will have to fend off Egyptian interest for Nigerian star

Orlando Pirates will have to fend off Egyptian interest in the race to land Chibuike Ohizu from Sekhukhune United.

READ NOW: KAIZER CHIEFS HAVE OFFERED ONE OF THEIR STAR PLAYERS A BUMPER NEW CONTRACT!

“He is a very good player and Orlando Pirates is one of the clubs here locally that are monitoring him. Egyptians are also looking at him, even though it is not your Al Ahly or Zamalek, but there is interest from that country” a source told SoccerLaduma.

Chibuike Ohizu already has five goals in just eight games for Sekhukhune United in the DStv Premiership this season.