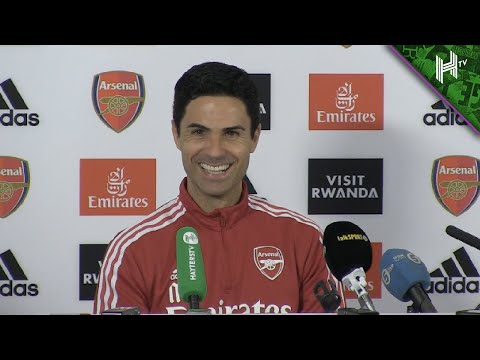 00:10 – Will Saka be ok to start on Sunday?: Saka will be fine. He had some issues but he’s recovered well.

00:25 – Can we expect to see Partey before the end of the season: Partey is progressing but we don’t expect him to make it for this season.

00:50 – Is Tomiyasu expected to start on Sunday: You know when a player has been out for a long spell but we’ll make a decision about Tomi tomorrow.

01:10 – Is it now a two horse race for the top four: Every club have difficult games ahead and we need to continue.

01:30 – How big would three consecutive wins be: If you can win consecutive away from home then you gain momentum.

01:50 – Is West Ham playing in Europe an advantage: West Ham have been doing it all season and have a big squad to maintain the level.

02:20 – How much have Arsenal improved since last time they played away at West Ham: Hopefully a lot. When we played West Ham last season we put ourselves in a difficult position.

02:50 – Xhaka’s renaissance: Things have happened in Xhaka’s personal life and he has found ways to deal with it. Credit to him.

03:25 – Jurgen Klopp’s new contract: We have not decided what’s right but what other teams are doing are not my concern.

03:55 – Spurs playing before Arsenal: Nobody knows about that. Last time Spurs played before us they lost.

04:45 – West Ham’s drop off: It is demanding but the chances West Ham made, the result could’ve been much different. It’s not a performance issue.

05:10 – Have Arsenal benefited from not being in Europe: We are going to make the most about it and take advantage of this opportunity.

05:30 – Is this stage in the season a learning experience for the young players: For most of them it is but it’s been like this for the last two or three months, but this is what we want.

06:00 – The journey Arsenal have been on in the last 12 months: We have a very different squad. The unity we as a club have is very different and beneficial. The team has evolved and the results are better.

07:10 – Hector Bellerin’s future: Any player with a contract with us is considered our player.

07:45 – West Ham playing a weaker squad with Europe on their mind: It’s their decision to manage their squads. You have to respect their decisions.

08:05 – Difficult to plan against a much changed team: We are guessing but all we’re doing is preparing for the game.

08:40 – Saka and his mental strength: The first conversation I had with Bukayo was after the penalty incident but Southgate was really supportive of him and helped him a lot.