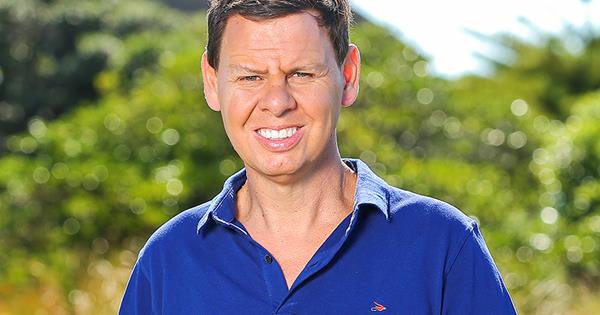 Losing his sight led to dark times for the intrepid TV star, but when things couldn’t have looked any bleaker, a challenge from an All Black pulled him out of his misery

When beloved broadcast journalist Patrick Gower recently cycled into Taranaki’s Whangamōmona township alongside his good friend and former All Black Conrad Smith, onlookers cheered. The pair, along with 13 other men, had just spent five gruelling hours completing a 135km challenge to raise money for the charity So They Can, but it meant more to Paddy than their supporters realised.

After a traumatic experience with two major surgeries on his left eye last year, including a failed operation, cycling was the saviour that pulled the TV star from a deep depression.

“I was really down in the ditch and kind of lost all my spark. I had a first operation in February last year for a detached retina, but sadly that failed. It hadn’t stuck the retina back on the eye quite enough and it detached again. That meant a second operation, which was brutal but thankfully it worked.

“Anyone who has had to recover from big operations will know it’s hard to bounce back – not just physically but mentally. You end up in a dark hole and feeling sorry for yourself, and wondering why you can’t snap out of it. It was super-hard to get motivated to do work and people sort of knew that I wasn’t right.”

While it took the award-winning journalist 10 weeks to recover physically from the emergency vitrectomy surgery, the mental toll lasted much longer. Paddy, who also has glaucoma, was worried he was going to lose his precious eyesight again at any time – if a tear in the retina recurred and became too big, it could cause irreversible blindness.

“The retina is right up by your brain, so it was pretty scary. I had the two operations in quick succession, and I lost all of my eyesight before them and it sent me on a downward spiral,” says the former political reporter, whose eyes have a genetic structure that caused his right retina to detach in 2014. “The last thing you need in a year of lockdowns is to be physically dealing with that and it was so hard to recover from. Really, it’s cycling that helped pull me out of it.”

Since other vigorous exercise was ruled out to prevent his eye from shaking around too much, Paddy opted for low-impact riding, pulling on Lycra and hopping on a bike for the first time in years. He felt what he describes as a revolution and quickly caught the cycling bug.

“Up until now, work has been my obsession and I totally love my job, but I’ve never had a hobby. I have to admit, I used to look at people in Lycra and think they were quite weird,” he laughs. “But I started getting into it and one thing sort of led to another, and then I signed up with my friend Conrad to join his team for the annual 2021 Lake Taupō Cycle Challenge.”

Paddy trained a couple of times a week after the lockdown ended in September, for what was meant to be a bike ride around the lake with 5000 cyclists, with Conrad’s team raising money for So They Can, a charity that supports 47 schools in Kenya, as well as helping 33,000 vulnerable children and empowering women to create businesses, and to make sure children in school are healthy.

Conrad, who shared his story in the Weekly last year, was to participate in the event but it was repeatedly postponed due to the pandemic.

“Training and being focused on the event really helped my physical and mental health,” says Paddy. “Conrad still wanted to raise money for So They Can, which he is an ambassador for, and I’d been doing a lot of training after coming on board, and so we decided to plan our own cycling challenge in our hometown! It was called Surf to Saddle, a cool name because of three big hills that look like a saddle,” Paddy explains. “It started at Oakura Beach, which is the most beautiful beach in New Zealand and close to where I grew up in New Plymouth, and it ended in Whangamōmona.”

Sadly, just three weeks before their ride, Conrad’s father Trevor passed away from cancer. As a kid growing up, Paddy was friends with Conrad’s older brother Nathan, who also competed in the challenge.

“I’m good friends with the entire Smith family. We lived in the same neighbourhood in New Plymouth and actually used to ride our bikes to school together along a street. We’d meet every morning in our school uniforms and ride like Tour de France guys into the head wind,” Paddy tells. “Back then, Conrad was a very determined little brother to Nathan and their other brother Heath, and we were neighbourhood buddies.”

Paddy’s mother Joan passed away from cancer in 2007 at the age of 57, so he knew the impact their father’s death would have on the Smith brothers.

“Trevor was someone I really looked up to. He was a really classic Taranaki dad who put his kids first and didn’t blow his own trumpet, and always looked out for other people,” he says. “He was a real hero of our province and a personal hero to me. Listening to some of the speeches at his funeral, I learnt Trevor had ridden out to Whangamōmona, and stories were shared about all of his sporting adventures and camaraderie, doing cool stuff with his mates, which I found really inspiring.”

Paddy decided the men needed to bring the same spirit to the Surf to Saddle and when it came to the big day, he woke at four in the morning, downed seven Weetbix and waited in nervous excitement.

“This was my first big ride in a group, and obviously with a lot of fit guys like Conrad and Nathan, I was nervous about letting them down or being slow. I was so worried I wasn’t ready,” he recalls. “But I’d been riding two or three times a week, for up to four hours sometimes, and the week before I even trained outside in a cyclone for seven hours!”

Based in New Plymouth after returning from France because of the Covid-19 pandemic, Conrad got sponsorship from Adidas for the Lycra, with the only two pink sets going to him and Paddy.

“In the future, we’ll aim to get everyone in pink Lycra because that’s sort of our team colour now. I also want to make it clear that it wasn’t pink, it was magenta, which I quite like,” he quips. “One of the guys made special bibs with ‘For So They Can’ and ‘In Loving Memory of Trevor Smith’ written on them. To combine it all – my love of cycling, helping the Smith family and kids in Kenya, and in my hometown of Taranaki – was pretty special.”

Their group ended up having 15 riders, the same number as a rugby team, and fitting for sports-mad Trevor. When they passed Stratford on their ride, the men had another seven cyclists join them, which is the number of reserves in a rugby team.

“It was all meant to be and we rode through Trevor’s home settlement called Douglas, where we stopped and had a moment’s silence, and a guy came out and played the bagpipes. We gathered in a circle on our bikes, like when surfers do a paddle out,” Paddy says. “It became extra-special and it was lucky everyone had dark sunglasses on because it was obviously pretty emotional.”

But there was also a touch of humour for the team, inspired by Conrad’s nickname Snakey, when a local spectator held up a sign with “Go the Pink Snake”, written in pink spray-paint.

“We were able to have a laugh about that and helping those kids is an awesome feeling. I also wanted to have a good ride and prove to myself that I’d got fit,” says Paddy, who raised $22,000 of the team’s $55,000 total for the fundraiser. “It was one of the best days ever and just such a wicked thing to be involved in.”

His proud dad Gordon drove out to Whangamōmona to pick him up after the race and Paddy laughs, “I don’t think he’d seen me complete a race since cross country in fourth form. He gave me a massive hug.”

Paddy and his team are hoping to ride together again next year and with any luck, the Surf to Saddle will live on like the famous magenta Lycra now hanging in his wardrobe.

“I wouldn’t mind trying surfing now because wetsuits aren’t quite as offensive to the public as the pink Lycra,” jokes Paddy, who says his spark has returned. “People don’t see you as much because you’re in the water rather than on the road. To Kiwis who are worried about seeing me in Lycra, I think surfing’s where it’s at.”

To find out more about So They Can, to sponsor a child or donate, visit www.sotheycan.org/donate