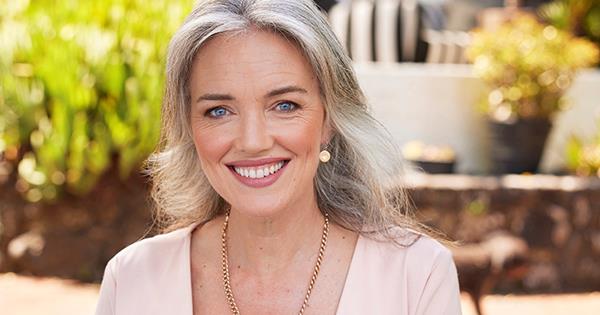 There’s one thing you can be sure of when you have a conversation with Petra Bagust – and that is humour. You will always end up laughing out loud, no matter what the conversation topic.

Which is why she was such a big hit on Ice TV in the ’90s and why she is the perfect person to host a new podcast about things we don’t talk about called Grey Areas.

“It’s definitely a passion project for me,” she says over Zoom as we indulge in Friday night drinks – vodka and soda for her, Prosecco for me.

“I talk to well-known people about things like having sex with the same person for years and years and years,” she laughs. “Or what happens on the other side of menopause. And what grey hair means for a
woman.

“I have people over to my house, and we sit and talk about stuff that doesn’t often make it into the mainstream media,” she says.

Petra is turning 50 this year and she knew that in terms of television work, she was at the age when she was about to fall off the edge of relevancy, and yet she had never felt more alive.

“I call it spine-full, if that makes sense. I’m more likely to speak up and back myself. So I decided to make a podcast about how women are supposed to be becoming= more invisible as we get older, but we are actually more energised and more free because we’re under the radar now.”

“I just interviewed Karen Walker at my house and while I should have been thinking about the questions I was going to ask her, I was totally distracted worrying about my faded, fraying outdoor cushions. Like, really? Then I realised that my home is welcoming and I love hosting people. It’s a good thing Karen didn’t want to have a swim though because the pool was green!”

Petra couldn’t resist asking her former Ice TV co-stars Jon Bridges and Nathan Rarere to feature on one episode and a bonus episode as well.

“I’ve always wanted to do a reunion show and once had an idea to do it in Antarctica,” she laughs. “In the end, we settled for Mexican breakfast at my place, but we spent the whole time reminiscing and laughing so we had to get together again to do a proper podcast interview.”

As one of the few women TV personalities to have embraced her natural colour, one thing Petra is always happy to talk about is her grey hair.

“You get to a certain age in your life and you have to decide which rules you’re going to obey or whether you’re going to make your own rules. So for me, grey hair is a metaphor for freedom.

“At the time, I was going to the hairdresser and loved the way I looked with my dyed hair for two weeks before the roots showed through, and then I hated how it looked. The emotional rollercoaster was exhausting.”

Petra was not on screen at the time and realised that she could reject the perception that she had to fit a physical size, be a certain age and behave in a certain way.

“It came down to self-acceptance and there was a transition period where I stopped caring about being attractive to men. Hamish and I have been married for 22 years. I’m not needing to attract a new mate!”

Their daughter Venetia, 18, has just left home to go to university, and her younger brothers Jude, 16, and Teddy, 15, are leading busy lives, which means Petra has more time to do work she feels passionate about.

She is committed to te reo Māori, having begun learning it four years ago. In fact, she’s a little bit addicted to learning, so in lockdown, instead of baking bread or doing jigsaw puzzles, she signed up to do a postgraduate degree in Chaplaincy through the University of Otago. Meanwhile, her husband Hamish is also doing a psychology degree part-time, so currently everyone in the house is a student!

“Part of my work is with Media Chaplaincy NZ, providing pastoral care for people who work in the media and it’s mainly listening. I see it as somewhere between a counsellor and a good friend, where you hold space for someone,” she explains.

Petra points out that we have chaplains for hospitals, schools and the military, but hardly any care for the media.

“Yet journalists are often the first responders. They are there when terrible things happen and then they follow the story in courtrooms,” she adds. “And they also often come under fire for what they report or broadcast.”

One of Petra’s new mantras is to “take action”, and she’s certainly fulfilling that promise with a podcast and her chaplaincy work.

“I have more ideas than I can actually make happen. I feel more alive and more energised than I’ve ever felt before, and I can’t wait to share Grey Areas.”