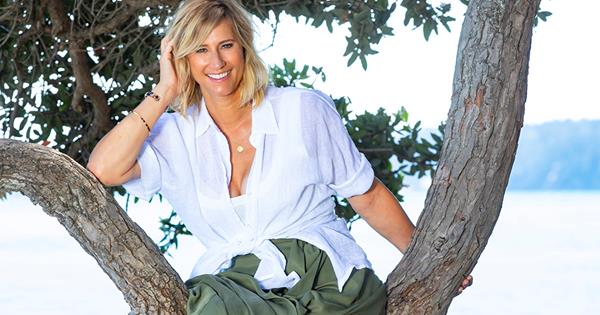 Pippa Wetzell has just come out of home isolation after she and her children came down with Covid along with thousands of other New Zealanders in recent weeks.

But she looks happy and healthy, and admits she is quite keen to get out to the supermarket after leaving it up to husband Torrin Crowther, who managed to escape the virus.

“Our daughter got it first and then we all came down with it,” she tells. “When you have three children, there are just so many more opportunities for the virus to come home. I wasn’t too bad; it felt like a nasty head cold, and it was nice to stay home in bed with it actually, to rest and recover.”

For Pippa’s family, like many, dealing with Covid has meant spending more time together and for her that’s no bad thing. During lockdowns she did a lot of filming around the house for Fair Go, and so her children Brodie, 15, Cameron, 12, and Taj, 11, were often used as props.

“Taj had to dress up as a superhero for one piece,” Pippa laughs. “I was just grabbing what I could on the iPhone and so they all helped out quite a bit over those times. But mostly they were quite mocking of my abilities at filming with my iPhone. There was a lot of humour involved.”

As Pippa, 45, heads into this year, it will be her 10th working for the consumer advocacy show, and it will be the 45th year that the programme has been on air.

“I was looking through some old footage the other day and it was quite scary how quickly the time has gone,” she admits.

Pippa started work at Fair Go after spending three years presenting Breakfast and she says right from the start she felt the job could be something she would do for a while.

“From the very, very early days it was always a team show,” she says. “We have such a wonderful team culture and people just don’t leave. Hannah Wallis has been there for at least 20 years, and Gill Higgins and Garth Bray have been there a while too. Even Hadyn Jones has been there for five years.” And as we all know, Weekly columnist Kevin Milne was on the show for 27 years.

“It’s a really collaborative team and people on the show really want the absolute best for someone else, so people will sacrifice their own time on stories to help someone else get the best possible result, which is lovely.”

But Pippa says, for her, it’s about working on a programme where she gets to change people’s lives, which she says is such a privilege.

“It’s a job that’s not easy to walk away from and on top of that there is such a variety. One day you can be doing a story about there not being enough pineapple on a pizza, and the next day you could be doing something much more in-depth and serious.”

Pippa says that of all the years she has been at Fair Go, the times we are living in now are much more volatile for consumers.

“There’s so much uncertainty at the moment in terms of inflation, interest rates, petrol prices, job security and then underlying all that are concerns about everyone’s health,” she says.

There is also the increase in online shopping, which brings with it a whole new area of consumer issues.

“Someone said to me the other day that Fair Go must have few problems to tackle now that everyone is doing online shopping, but for everything that is resolved using the internet, you get about five problems that crop up. It’s so hard to contact someone to help you get problems fixed.

“Hadyn did a story the other day about someone who had an issue with a really big international company but couldn’t get hold of anybody on the ground, despite that company being all over the internet. There was no person to communicate with, so those problems aren’t going away.”

Pippa’s relationship with co-host Hadyn has been a joy for her right from the start. He is, she says, an outstanding person who she has a lot of time for.

“Yesterday, out of the blue, he rang just to say he thinks I’m awesome and to thank me for everything I’m doing for the show,” tells Pippa.

It could be that Hadyn, who has a good sense of humour, was aware that Pippa would be doing this interview and thought it would be something nice she could mention about him.

“It’s a bit embarrassing,” laughs Pippa. “But it shows how supportive he is and how much we respect each other.”

Pippa says that often when they are filming Fair Go, they will start chatting because they need to be having a conversation before they turn to the camera to start the show.

“What we’ve found is that we start chatting and get so engrossed in what we are talking about that we miss the cues to turn to the camera. So now we just can’t talk about anything that makes much sense.”

Both Hadyn and Pippa would have been babies when Fair Go started. Pippa was born in 1977, the year Fair Go first broadcast, and Hadyn was just a toddler.

“Feel free to point out that Hadyn is older than me because he’s a bit sensitive about that,” laughs Pippa. “I cannot remember a time when Fair Go wasn’t there on the television. It was always part of my life.”

When Pippa started out in journalism, aged 20, she loved daily news and in those days the serious current affairs programmes were on a different floor.

“They were on a different level and they just seemed like this different breed of people, slightly untouchable,” she recalls. “So I never thought there would be a point where I could ever be involved.”

Pippa says she loved the speed of live television and presenting Breakfast, so when she went to Fair Go, she wasn’t sure how it would feel to be doing half an hour of TV every week instead of 15 hours.

“But it’s the work that goes on behind the scenes and the production values,” she explains. “There isn’t a second that goes into our stories that has been done once over lightly.”

Pippa says there have been many stories over the years which she loved, but her favourite part of Fair Go is the Consumer Heroes feature which the show does during the last programmes of the year.

“We’ve done it for the past three years and we reach out to kids and say, ‘What’s the problem and what’s the solution?’ Then one of the reporters will go and work alongside those kids. Some of the ideas, the creativity and the solutions that these kids come up with are amazing. I’m always bawling when I watch them, even though they’re not sad stories.”

Pippa says she has tremendous respect for teenagers today and how aware they are about what is happening in the world.

“Social media has its downsides, but it does an incredible job of making teenagers so much more aware of issues,” she asserts.

Pippa is not a big social media user, with only 78 followers on her Instagram account, and she doesn’t post. Instead, she calls herself a social media stalker and uses it in much the same way her children do, to get information.

“One of my daughters is quite disengaged from social media, but I’m realistic enough to know that this is how kids engage these days. They don’t pick up the phone and talk to their mates like we used to. They arrange get-togethers on social media and that’s how they communicate. How wonderful that they’ve had that during the past two years to keep in touch with their mates.”

As Pippa’s family recovers from Covid, they are hoping the pandemic will ease enough for them to plan a family celebration that has been on hold for more than two years.

“We haven’t been able to do something wonderful for my mother-in-law Lyn’s 70th birthday as we were just starting to plan it pre-pandemic. So now we are going to try to get that happening later in the year.

“I’m so excited at the prospect of the country opening up for all of those tourism operators and the idea of returning to something a bit normal fills me with joy.”

The family did get to celebrate Pippa’s father Clem’s 70th birthday before the pandemic, however.

“We went to Samoa, the entire family and about 100 of his mates,” she laughs.

Pippa has Samoan heritage and says she has kept up to date with how the country is coping with the pandemic, although her son Taj is doing a project on it for school, so he can answer any questions
she has.

She concludes, “We’ve been really conservative with our approach to mingling, so I suspect we will try to do something at some point. But at the moment, I think we just want to make sure we can all be safe.”