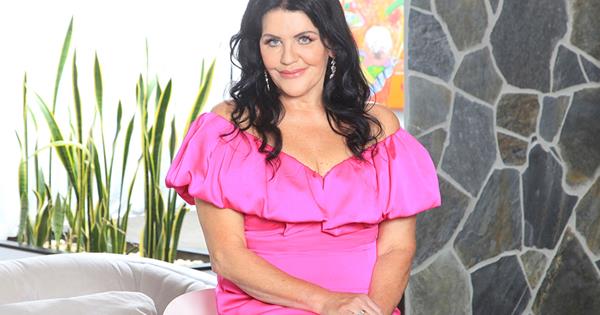 The past two years haven’t been the easiest on broadcasting legend Polly Gillespie. Not only has she endured the anxious uncertainty of the pandemic, but also a shock job loss, a painful relationship split and the heartbreaking death of her mother after a difficult battle with dementia.

Yet it’s a smiling Polly who greets us as at our Auckland shoot, squeezed in during a quick work trip from her home in Wellington’s Island Bay.

With a new and exciting radio job to sink her teeth into, the star has a lot to look forward to in 2022. But while she’d like to think the year will be more settled than the last, she’s not holding her breath.

“I have zero expectations,” tells Polly. “Expectations and hopes lead to disappointment in my experience, so instead I’m just buckling in for the ride and we’ll see what happens.

I’d like to keep my job this year, though!”

It’s almost two years since she and her longtime co-host (and ex-husband) Grant Kereama lost their More FM roles as part of a shock pandemic restructure. It was a bruising experience, but Polly is quick to acknowledge she was just one of many who’ve faced unemployment.

However, with a new evening show on Today FM – which will air between 8pm and midnight from next week – Polly is welcoming the fresh beginning with open arms. It feels like a long time since she was last in her “happy place”, entertaining listeners with her warmth and riotously funny take on life, and she can’t wait to get back to it.

There will be music and laughs, of course, but Polly hopes her show will also deliver something a little more meaningful. “It’s going to be really real,” she says. “About love, life, loss, triumph over tragedy, relationships, family, children… Real-life stories about what’s going on in people’s lives.

“Hopefully it’ll turn into a big community of listeners who want to talk honestly. I’m hoping I can help point people in the right direction in terms of finding help and support. I don’t want to be so arrogant to suggest I might be able to change the world, but who knows? Maybe I can make a wee bit of a difference. That would be wonderful.”

The past few years have taught Polly to take nothing for granted and the break from radio allowed her time to reflect. She wrote her first book, a rollicking memoir called The Misadventures Of Polly Gillespie, as well as volunteering at Women’s Refuge and spending precious time with her beloved mum Thelma before her death in April at the age of 91.

Grief, though, has taken a toll and despite doing her best to “march on”, she’s found the loss of her mother to have been a complicated experience.

“I’m better at dealing with other people’s grief than my own,” says Polly, admitting her usual method for getting through the tough times hasn’t been so successful.

“Usually I just throw myself into work, keep busy and use humour to deflect things. But something strange happened a couple of months ago – I was out with my friends when one of the other women mentioned her own mother’s death. I just started crying and couldn’t stop. I sobbed for hours and hours. I was so embarrassed, but my lovely friends said, ‘Polly, it’s about time. We’ve been waiting for you to grieve.'”

Until then, Polly hadn’t given herself the chance to acknowledge her deep sorrow, which was mixed with a sense of guilt. Through tears, Polly explains she’d felt guilty for not realising earlier that her mum had dementia, for not being there enough towards the end (even though she was a very regular visitor) and for being intolerant at times.

“I’m getting through it now,” she says. “I’ve realised I was being harsh with myself. Now I’m really at the point where I just miss my mum so much. She was such a wonderful woman.”

Polly is hugely grateful to her close group of female friends and also to her family, who’ve all helped enormously over the past year. Until very recently, she still shared her rambling 108-year-old villa with her children, Tom, 27, Katherine, 25, and McGregor, 22, plus her four-year-old granddaughter Roseanna.

It was a big, busy, noisy house and Polly often joked about her children’s reluctance to leave the nest. But when Katherine and Roseanna moved out last year to live with Katherine’s partner, then McGregor went flatting with friends, she felt bereft.

“As much as I complained about the horrors of a communal house, it then became very big, empty and quiet, and it broke my heart.

I definitely don’t miss their mess, but I do miss them. Fortunately, I still have Tom, who’s totally self-sufficient and lovely.”

Polly – who is known as “Minnie” to Roseanna – still sees her kids a lot and she takes care of her darling granddaughter several days a week. “She’s just the biggest delight, but I’ve realised I’m basically her personal entertainer,” grins Polly.

“She’ll say, ‘Right, Minnie, today we’re going to mow the lawns, go to the tip, then you’re going to blow up balloons for me. Then we’ll get ice cream, do some Irish dancing, make pancakes, and maybe we’ll play doctors and nurses.’ Sometimes I have to say, ‘Minnie just needs a lie-down!’ It makes me wonder how on earth I managed three kids under five.”

Another constant in Polly’s life is Grant, who has remained a dear friend, despite the collapse of their marriage in 2015 after more than 25 years together. In fact, the blended family functions so amicably that Polly event spent last Christmas with Grant, his new wife Lisa and the kids at Lisa’s parents’ place.

“When Lisa called to invite me, I was like, ‘Are you sure that’s not weird?’ But she was just so lovely, saying, ‘Of course not. You’re family!’ We had the most beautiful day and a lot of laughs. I wish everyone could have this post-marriage situation because I’m very aware how lucky I am that it’s worked out this way.”

Polly – whose age has always been a closely guarded secret – laughs when asked about the dating scene at this stage of life. It dawned on her recently that the pandemic has had an interesting effect on men.

“Right before both lock-downs, I suddenly had all these guys texting to see if I wanted to reconnect. It was like they wanted to fit in a final fling before they were stuck at home. Um, no thanks!”

In fact, Polly – whose last long-term relationship ended in 2020 – is being “ridiculously sensible”, swearing off romance while she focuses on her new Today FM job. “If someone great comes along, then fine, but I’m actually quite happy as I am,” she says firmly. “I’ve learnt far too many times that romance tends to take me off road and right now that’s the last thing I need!”

Polly might have spent decades living the high life as a breakfast radio host, flying to glamorous places to interview A-listers, staying in posh resorts and partying at exclusive nightclubs, but now she’s perfectly content with her slower pace of life. In fact, she sees the world a little differently thanks to all she’s been through.

“I look back on those years and realise just how spoilt I was! I thought nothing of flying business class, being put up in incredibly fancy hotels and hanging out with mega-famous people all the time. Don’t get me wrong, it was fabulous and I loved every minute of it. But it was also a bit shallow. I’m at the point in life where I need more depth.”

Polly is confident swapping breakfast radio for the evening slot is right where she’s meant to be. “There’s something different about night shows,” she says. “There’s a soothing element to them because when people are listening to the radio at night, they’re often on their own. It’s very intimate.

“For something a little different, we’re going to be having themed nights on air. For instance, a focus on sex and relationships one night, then psychics and weird supernatural experiences another! Everything that is weird and wonderful about our lives.”

But despite the change in pace, there’s no doubt Polly is still the Polly we know and love – the one who says it like it is and isn’t afraid of a good old barney every so often. In fact, shortly before our chat, she was in line for her COVID booster jab when she found herself unable to hold back after spotting a man abusing a staff member.

“I tried to keep my mouth shut, but in the end, I just couldn’t help it. I yelled out, ‘Oi, don’t be a dick!’ Then I sat there wondering why I can’t be one of those more restrained people. But that’s just me. I’ll always be a scrapper when it comes to standing up for the things I believe in.”