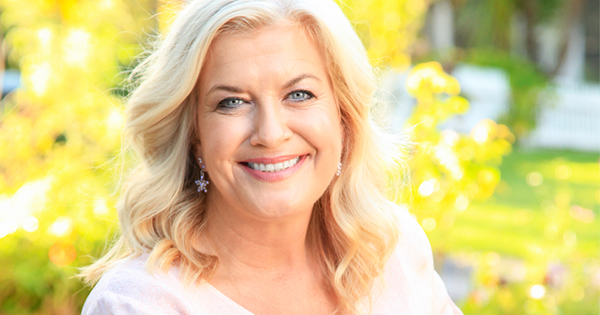 Earlier this year, Lorna Subritzky was among a group of tourists in Rarotonga who, after experiencing the delights of swimming with turtles, were asked an intriguing question.

On their journey back to shore, their guide wanted to know what their superpower would be if they had one. Coast FM host Lorna didn’t hesitate when it was her turn.

“I immediately said that my superpower is that I’m an optimist,” she reveals. “I’m just naturally a positive person and I always believe the best thing is going to happen. It doesn’t always, but it makes the journey through the bad things better.”

Lorna has needed to call on her superpower more than ever in the last year and a half to get through a raft of bad things life has thrown at her. She’s had to cope with one trauma after another, including the sad loss of her beloved brother Vernon Riley, who died of cancer last year, and now her own battle against breast cancer.

“I know some people are not wired to be positive, so I feel lucky that I am,” says the Auckland-based mum-of-three. “It makes the rollercoaster that is life a little easier to bear.

“It’s not that I believe positivity can cure you – nobody was more positive than Vernon, who believed right until the end that he was going to get better. If you are having to go through all of this stuff, it helps if you can still find the brighter things in life.”

Looking on the bright side is crucial for Lorna, 54, as she goes through chemotherapy following her breast cancer diagnosis a couple of months ago. This is the second time she has had the disease – the first was six years ago when a routine mammogram revealed she had DCIS, or early stage breast cancer.

After a partial mastectomy and radiotherapy, she was given the all-clear, and she has been vigilant about having yearly mammograms ever since.

However, a mammogram and ultrasound she should have had in December last year got held up because of a backlog caused by Covid and she wasn’t able to have them until May.

“Unfortunately for me, they found something a little bit more serious than last time – an aggressive grade three tumour in the other breast, and cancer cells in a lymph node as well,” tells Lorna, who was phoned with the shocking news as she was driving to work. “Luckily, a scan has shown that it hasn’t travelled anywhere else in my body, so for that I am very grateful indeed.”

She had surgery to remove the 38mm tumour and 18 lymph nodes, and is now part-way through several months of chemotherapy. That will be followed by radiotherapy and she’ll then be on a cocktail of drugs for a few years to prevent the return of the cancer.

In anticipation of her blonde hair falling out from the chemotherapy, she got it cut into a short spiky style and with typical Lorna pizzazz, had it dyed pink.

“The cancer journey can leave you feeling powerless at times – this was a way to exercise just a wee bit of control over the whole thing and have a little fun with it too.”

Throughout everything she’s been going through, Lorna is working as much as she possibly can and says doing her radio show has been a handy distraction.

“I have wonderfully supportive colleagues and I am very lucky that the radio station I work for, Coast, has a feel-good flavour colouring everything we do,” she asserts. “We don’t do doom and gloom, and it’s all about being upbeat. That helps.

“However, radio is a very intimate medium and I do share my private life with my listeners, the way I would with a friend. It’s humbling how caring and supportive they are.”

Lorna also shares much of what she’s going through on social media, regularly posting video updates to Facebook. One of the reasons she is happy to talk about her experience is to encourage Kiwi women to check their breasts and to not put off having a mammogram.

“Mammograms are the best tool we have to fight this awful disease. Kiwi women are eligible for free ones every two years between 45 and 69. If you can afford to though, you should have one every year after 40. Early detection can reduce the chance of dying from breast cancer by about a third – that’s huge.”

It would have been a shock getting the cancer diagnosis at the best of times, but for Lorna, it was yet another blow after a couple of years that she understatedly describes as “pretty terrible”.

Losing her brother Vernon, 57, last year was the most devastating thing. Lorna wipes away the tears as she recalls how, 18 months after being told his bowel cancer had gone, Vernon learned in May 2021 that it was back and had spread.

“He was told he had less than 12 months to live, which was a hell of a shock for the whole family, and he died five months later, in October,” she shares. “I’ve got three brothers – I’m number three in the pecking order and Vernon was number two – and we were very close.

“He had a few cards stacked against him in life and although I was younger, I felt a little bit responsible for him. We shared a lot of interests and he was very special to me.”

Following his terminal diagnosis, Vernon moved in with their parents Gavin and Doreen Riley in Havelock North, and after the country went into lockdown due to Covid in August, Lorna was able to get an exemption to drive there from Auckland to see him when his health deteriorated.

“I feel very lucky that I was able to say goodbye,” she confides. “I was also able to get an exemption when he passed away so I could be at his funeral, which I officiated. That was difficult but a real honour.”

Throughout this desperately sad time, Lorna was able to find something to be positive about – the fact that as a devout Buddhist, Vernon believed a better life was waiting for him. “That was a comfort, that he had that belief, and I hope he was right because he deserved it.”

At the same time, Lorna was also suffering her own health issues. She began experiencing excruciating abdominal pain that was sometimes so bad she could hardly speak.

“That wasn’t great, given what my job is,” she says with a wry smile.

She was worried that it was cancer, so when she was eventually diagnosed with severe endometriosis, she greeted the news with relief.

“My doctor thought it was the one thing I wouldn’t have, given my age and the fact that I have three children [endometriosis usually affects younger women and often causes infertility]. It is not common at my age, but obviously not impossible.

“My specialist thinks I probably had it for a while, but I was lucky that it didn’t affect my fertility – in fact, I had a surprise baby at 41. I know for a lot of people endometriosis is not a great diagnosis but for me it was like, ‘Hallelujah! It’s not the big C. I can deal with this.'”

After putting up with the extreme pain for nine months, she was delighted when the first line of treatment suggested by her specialist – changing to a different type of IUD – made a huge difference. “The pain just went away. I am so glad to have it sorted.”

Then, in March this year, she ended up in hospital after another bout of excruciating abdominal pain. This time it was found that she had a 7cm tubo-ovarian abscess, which required several uncomfortable procedures and weeks of daily intravenous antibiotic infusions to treat.

“I was lucky,” reflects Lorna, ever positive. “It could have killed me and it didn’t.”

And while she was going through all the trauma in her life last year, Lorna’s marriage to second husband Steve Subritzky also broke down. Lorna doesn’t want to dwell on what went wrong but says after evaluating her life due to Covid and losing Vernon, she began to think about what was important to her.

“It’s a changing world and with Vernon passing, you think, ‘Gosh, life is short, what do I really want?’ I have always believed you should be happy and not just go, ‘Oh, well, this is my lot in life.’ I felt like I needed to make some changes and look towards brighter horizons.”

Thankfully, there have been bright spots in among the dark. One of the best things to ever happen to her has been becoming a grandmother. Her gorgeous wee grand-daughter Kaia Te Atarangi Rose Kameta was born to her daughter Lucy, 22, and Lucy’s partner Chad on May 6, and Lorna absolutely dotes on her.

Lorna, who is also mum to Max, 23, and Zoe, 13, says Kaia has brought so much sunshine into the family’s lives. She enthuses, “I can be feeling pretty rough because of treatment, then she fixes her huge blue eyes on me and breaks into a toothless grin. In that moment, I feel like the luckiest woman alive.

“We’re all living in the same house, so I get to be very hands-on. I’m thrilled I am young enough, and will hopefully be energetic enough, to be helpful to Lucy and Chad – and I’m also grateful that Mum and Dad got to meet their first great-grandchild recently too.”

Meanwhile, her family has been an incredible support to her as have her friends.

It’s daunting knowing what she faces over the next six months or so, but she adds, “After that, this will just be a memory. I feel very lucky that this cancer has been caught early enough to be treated. I’ve got lots to live for and this is doable. I’m going to smash it!”